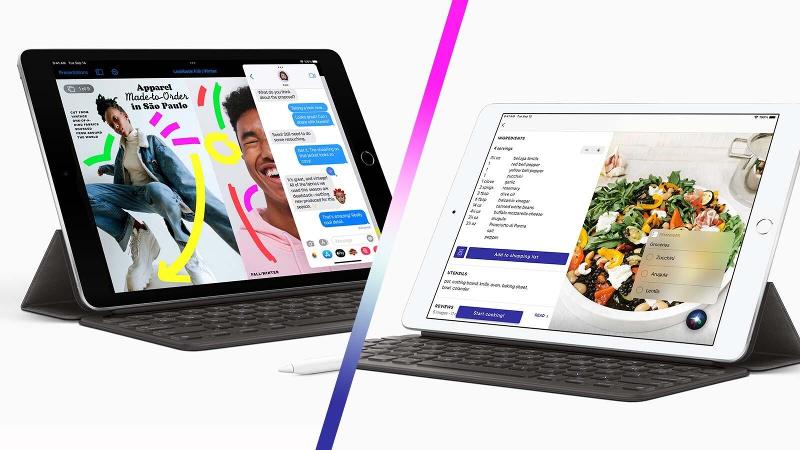 At its 14 September California Streaming event, Apple announced several new products, including the iPhone 13, a redesigned iPad mini and an update to the standard 10.2in iPad. We take a look at how the 2021 iPad compares to the 2020 model it replaces.

Unlike the iPad mini (2021) that saw a major overhaul in terms of form and features, Apple has stuck with its long-standing design for the standard iPad. That means that the 2021 model is identical to its predecessor, with a 250.6mm x 174.1mm x 7.5mm frame that was also the one used for the 2019 7th-generation iPad.

Weight is practically the same too, with the Wi-Fi version tipping the scales at 487g, which is three grams less than the 490g on the 2020 model. LTE versions are the same weight at 498g.

So, all models feature a 10.2in display, Home button, headphone jack, lightning port, smart connector, twin speakers and the wide bezels that have now been resident for three iterations.

They also support the first generation Apple Pencil and Smart Keyboard. The only aesthetic changes are that the 2021 model is now only available in Space Grey and Silver, with the Gold livery being dropped this time around. Plus, the white front fascia on the Silver model has been replaced by a black one on the 2021 iPad. Otherwise, it’s as you were.

While the externals of the iPads may be the same, Apple has made some improvements to the components. Here’s the main differences between the two.

But, Apple has bestowed upon the latest version a panel that offers True Tone, the feature that changes the colour temperature of the display to best suit the surrounding environments. It also offers sRGB for more balanced colours on the screen.

Either display is perfectly usable day-to-day, although if you want advanced features like fully laminated screens or the removal of the Home button, then you’ll want to look at the iPad Air (2020) or new iPad mini (2021).

One of our favourite improvements to the 10.2in iPad (2021) is that Apple has doubled the storage capacity. Where the 2020 iPad started with a rather paltry 32GB and topped out at 128GB, the new model now comes with a far more suitable 64GB baseline and also offers a 256GB variant.

The rear camera unit remains unchanged this time around, so both models come with a f/2.4, 8MP Wide camera, equipped with a 5x digital zoom and HDR for photos. This is capable of capturing 1080p footage at 30fps, slo-mo video at 720p and 120fps, plus time-lapse video with stabilisation.

It’s good for snapshots when you don’t have your iPhone to hand, but the size and cumbersome nature of larger iPads means you wouldn’t want to use it as your main camera.

This brings with it a 2x zoom out capability that allows Apple’s new Centre Stage feature to come to its cheapest iPad. This tracks your face on a video call, zooming out to keep you in the centre of the screen or to incorporate any others that come to join you. It’s a simple but cool effect that can make your boring old FaceTime calls a little more fun.

The new front facing camera also beefs up the video recording quality on the 2021 iPad, with a maximum resolution of 1080p at 60fps and extended dynamic range for better colours if you stick to 30fps. Again, this surpasses the iPad (2020) camera, which can only manage 720p HD.

Parity is the order of the day for connectivity. Both iPads come with Wi-Fi 5, MIMO, Bluetooth 4. If you want newer standards, Wi-Fi 6 and Bluetooth 5.0 you need to pick one of the other iPads.

If you opt for the mobile network compatible models then you’ll be able to make use of Nano or eSims and Gigabit-class LTE that supports up to 27-bands. Only the iPad mini and iPad Pro offer 5G so far.

There’s also built-in GPS that you can use with Maps if you wander away from the lands you know.

Apple has said that battery life should be the same on both models, with around 10 hours of web browsing and streaming from a single charge.

Here’s a breakdown of the technical specs for the two models of 10.2in iPad:

Apple is known for keeping its older products on the latest versions of software for longer than most others in the industry. Both of these iPads will run on iPadOS 15, and you can be confident that you’ll get a few more upgrades before they age out. Obviously, due to the newer chip, the iPad (2021) should last a little longer.

To see what Apple’s latest tablet software has to offer, read our guide to iPadOS 15.

There are not too many differences between the 2020 and 2021 10.2in iPad, but Apple has chosen its refinements well. The display has been bumped up to True Tone, the front-facing camera has received a big upgrade in terms of quality, plus the A13 Bionic chip should mean you get faster performance. The real advantage of the newer model is the fact that you get twice as much storage as with the previous one.

If you can get the old model for a deal – that’s less than the £319 asking price of the new model, then it’s worth considering (check the latest deals on the 2020 model below, the best price for the 2021 model is at the top of the page). But the new one is well priced and well specced, so we’d go with that.

Note: We may earn a commission when you buy through links on our site, at no extra cost to you. This doesn’t affect our editorial independence. Learn more.