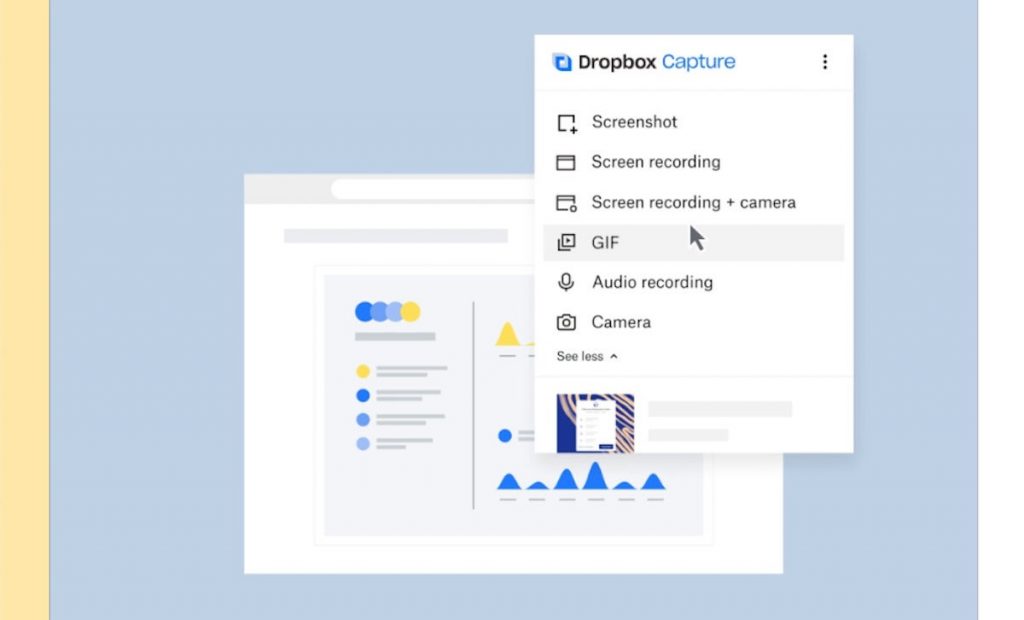 With Dropbox Capture, users record short films of up to five minutes using their webcam, with options to also record their screen, create a GIF, or send a voice message. The content, which is uploaded to the user’s Dropbox account, can be sent to colleagues via a hyperlink and viewed or accessed on demand.

Dropbox Capture is another example of asynchronous communication, meaning messages are accessed whenever is convenient for the recipient. This contrasts with real-time video and voice meetings that require an instant response, and were heavily relied on as businesses adapted to the increase in remote work during the pandemic.

“For many, remote work has meant endless hours of video meetings, constant chat messages, and long emails in place of the kind of dynamic communication that comes from being in the same room,” the company said in a blog post announcing the feature Tuesday. “Customers who work across time zones have told us they need new ways to provide context for their content without adding more meetings and emails.”

The addition of asynchronous video communications features has become a growing trend among software vendors of late: Slack recently announced the general availability of its “clips” feature, while Cisco and Zoom have all added similar functions to their productivity suites. Work management platforms Asana and Trello have also partnered with async video startups to let users send and access video messages within their apps.

Dropbox Capture provides the same benefits to its users, with the file-sharing and storage software vendor increasingly focused on facilitating collaboration between office workers.

“Innovations such as the asynchronous video recording tool introduced by Dropbox can address the need for team collaboration while at the same time helping employees address the constraints imposed by distance and time,” said Raúl Castañón, senior analyst at 451 Research, a division of S&P Global Market Intelligence.

He added that Dropbox’s roots as a content repository and content management tool allow it to bring asynchronous video directly into users’ workflow “as opposed to employees jumping between communications and collaboration applications.

“As we transition into hybrid work, we expect to see asynchronous collaboration gaining more relevance, with real-time collaboration in the form of chat, voice calls, and video meetings being used more selectively,” he said.

Dropbox Capture is currently available in beta for customers of Dropbox’s personal and business plans.

Dropbox also announced Replay on Tuesday, which helps team communicate around video content. The number of video editing files on Dropbox grew by almost 50% between 2019 and 2020, the company said. Replay, which will be available in beta “soon” (sign up here for the waitlist), provides a single tool to share and manage videos, as well as comment and respond to feedback.

Dropbox Shop, also due to arrive in beta soon, enables content creators to sell content stored in Dropbox. This provides a way for creators to list products, deliver content to customers and view a range of analytics.