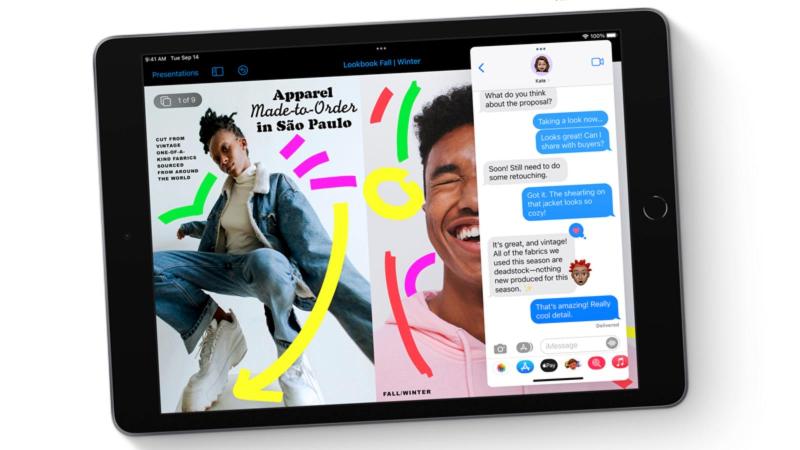 Why repair something that is not broken: In terms of price-performance ratio, the iPad 9 or 10.2in iPad is unbeatable.

Apple’s cheapest iPad, the iPad 10.2in, is often overshadowed by the iPad Pro and iPad Air. But the basic model is the best-selling tablet – no Android tablet can keep up with it either.

Admittedly, Apple’s new 10.2in iPad looks a little old-fashioned compared to the other iPads: the bezels around the edges are wide and the housing thick. The home button, which has disappeared from all other Apple devices (except the iPhone SE) remains on the standard iPad. But despite the old fashioned looks the new iPad convinces with its current performance.

With its high-quality housing and first-class workmanship, the iPad does not look like a budget tablet. But, compared to the iPads Air and Pro, the housing is significantly thicker and slightly heavier and the angular-modern design of the Pro models may not be everyone’s taste.

We look at the home button with mixed feelings: It looks outdated and there are undoubtedly advantages to the Face ID present on the Pro models. However, a Home button does have advantages: navigation is more intuitive with a button and there is no issue with unlocking the device while wearing a mask.

There had been rumours that the new iPad would be frameless like the iPad Air. However, this would have required new more expensive components and increased production costs, which would have translated into a higher final price. With this iPad being the iPad of choice for schools, and with competition from cheap Chromebooks, Apple’s need to keep the price down will have overruled any desire for such changes.

There is one change that may go unnoticed. There is no longer a model with a white front. Previously the silver or gold iPad from 2020 had white edges to the screen. Now there is only a choice of Silver or Space Grey and both come with black edges for a uniformly dark front – which we think lends itself well to watching video and looking at photos.

The dimensions are identical to the previous models, but the weight has been reduced by exactly three grams. The iPad is still not light though: iPad 10.2in is, at 487 grams, 30 grams heavier than than the iPad Air 4, and a few millimeters larger. If you want a really light and handy iPad, you have to reach for the 293 gram iPad mini.

Apple has updated two relatively easily replaceable modules: There is a faster chip (the A13, up from the A12) and a modern and high-quality front camera.

The new front camera is arguably more important than the faster processor. Apple has installed an ultra-wide camera with the Center Stage functionality introduced on the iPad Pro and iMac. This isn’t just limited to FaceTime, it’s also great for Zoom, Teams and TikTok. Thanks to Centre Stage the iPad will always frame the video call so that if you move the camera tracks you, and if someone else joins the call the frame will widen to accommodate them.

In addition the supported angle of view is much larger thanks to Ultra Wide Angle which means you can include several people or a small group in a video chat – useful in class or a presentation, for example.

An ultra-wide-angle lens also opens up completely new recording possibilities, both for videos and selfies. Tip: The possible angle of view becomes even greater when you take pictures with the Camera app. Only for photos is the full 122 degrees viewing angle available, for videos the viewing angle is smaller for technical reasons.

Apple has also greatly increased the resolution of the FaceTime front-facing camera. Compared to the 2020 model, the resolution increases from 1.2MP to 12MP, a huge leap that enables better selfies and HD videos. Videos can now be recorded at up to 1080p resolution where the predecessor could only create 720p videos. Unfortunately, even with the new front camera, the image is a little blurred when the light is very low, but it’s still a lot better than the previous generation.

That’s the front Selfie camera; the rear-facing camera has not seen an update. However, iPads are rarely used as a camera, so the fact that the iPad still features an 8MP camera probably isn’t a huge deal. A flash is also missing. Despite this it is well suited for everyday tasks such as photographing documents or taking an occasional snapshot. While the camera components haven’t been updated you may still enjoy image improvements thanks to the image processor of the A13 chip. Another way that the power of the more advanced chip is apparent is when using augmented reality apps such as Ikea’s app.

A small advantage: thanks to its unchanged design all cases and most accessories from the previous models should be compatible.

We’ve mentioned the CPU above in connection to the camera module, but there is a lot more to say. The new iPad received an A13 chip, which made its debut in the iPhone 11 and 11 Pro. Two high-performance and four high-efficiency cores ensure solid performance.

According to Geekbench, the iPad only has 3GB of RAM, which is one GB less than the iPad Air 4.

During the keynote presentation Apple mainly used devices from other platforms as a benchmark: claiming that the new iPad is be three times faster than Chromebooks and six times faster than Android tablets. It’s a somewhat spongy comparison which left many wondering if the new model is noticeably faster than its predecessor. Our performance test can confirm that it is.

The increase in performance should therefore be noticeable in everyday life. However, those updating from older devices will see an even bigger leap: when you consider that the iPad 7 from 2019 uses an A10 chip that should represent a big improvement in just a couple of years.

Other advantages of A13 include the improved neural engine, which according to Apple is about 20 percent faster than that of the A12 chip in its predecessor.

As for graphics, we also saw an improvement here. We measured the performance of the graphics with GF GFXBench (Metal, 1080p Manhattan 3.1, Offscreen). The new iPad scored 10,873 points – just under ten percent more than its predecessor, which scored 9,119 points. The 2019 model is left far behind with just 3,848 points in this test.

Another reason to upgrade: Apple has doubled the storage capacity. Now you can now choose between a 64GB and a 256GB model. The 32GB of the earlier entry-level models is thankfully gone from the line up – good news because it probably caused space problems not only for video fans.

That this is an entry-level model becomes clear when you look at the supported network standards. Wi-Fi 6 or 802.11ax are not supported, only the predecessor Wi-Fi 5. The iPad mini now offers Bluetooth 5 and 5G, but the 2021 iPad is still stuck with Bluetooth 4.2 and the older Wi-Fi and LTE standards.

We are not really surprised that Apple continues to rely on Lightning on this iPad (despite having updated all other iPads to USB-C). Lightning is needed for the Pencil 1 for pairing and Apple probably saves production costs with old components.

Also keeping the cost down: the iPad is compatible with the original Smart Keyboard rather than the more expensive successor models.

Apple has been offering 10.2in panels on the iPad since 2019. The edges may be wide, but luminosity and colour representation are excellent and the resolution is comparable the sister models. Instead of the so-called P3 color space as with other models, only the sRGB color space is supported, but probably only photographers will notice this.

At just under 500 cd/sqm, the panel is bright enough for outdoor work, but cannot compete with the iPad Pro models. Night Shift is supported and the automatic colour correction True Tone is now included for the first time.

We think the 10.2in screen (measured diagonally) is completely sufficient for most tasks, but in direct comparison with an 11in iPad Pro, the display does look much smaller. The reason for this is that the 10.2in iPad uses the traditional 4:3 format, while the iPad Pro uses a 4.3:3 format. However, the dimensions of 10.2-inches are a good compromise between size and manageability – a larger model would often be unwieldy.

The main weakness of the screen remains though: There is the tendency to mirror because the screen is not laminated. The iPads Pro and Air are a little flatter thanks to full lamination of the screen. If you sit next to a window or with your back to a lamp, an iPad Pro distracts you much less from reflections. However, this hardly bothers anyone in practice, so there are few complaints from users of the iPad.

An iPad should last a whole working day, which should not be a problem with the 10.2in model. The battery still holds 8557 mAh, which is actually more than the 11in iPad Pro with 7732 mAh. The running time is a strength of the model, in our web surfing test the new iPad lasted 12 hours and 50 minutes – 29 minutes longer than its predecessor. In our second test, playing a video at full brightness, the iPad, like its predecessor, lasted almost 6 hours.

Like its predecessor, the iPad comes with a 20W USB-C Power Adapter. Apple has been able to increase the charging speed compared to its predecessor though. On the fast supplied power supply, the old iPad managed only 15 percent charge in half an hour, now it’s 20 percent. Instead of only after four hours and 21 minutes, the device is fully charged after almost three hours.

Many use iPad for video conferences, but often also for playing music and videos. Good speakers that iPad can offer are helpful here. iPad cannot keep up with the balanced four-speaker system of an iPad Pro, but the sound quality is perfectly fine at limited volume.

The 9th generation iPad is fully recommended. Of all iPads it offers the best price-performance ratio. If you compare the price of the basic iPad with the competing iPad Air, you may wonder if the more modern design and better cameras really warrant the extra £260/$270. For home users, however, we think the new iPad mini (£160/$170 more) is worth consideration as it is lighter, more compact and more modern looking.