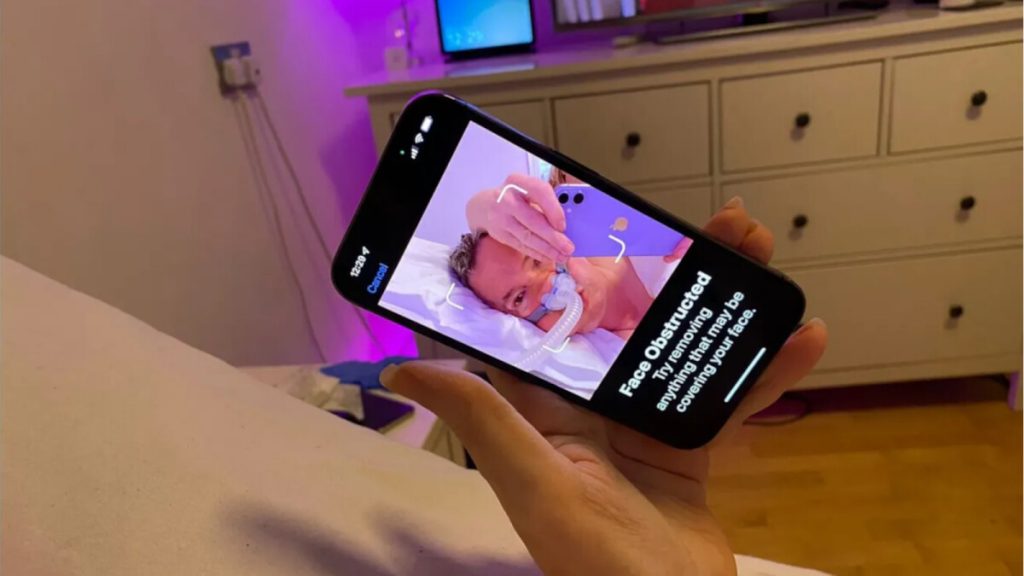 Share
Facebook Twitter LinkedIn Pinterest Email
Apple’s iPhone 13 series may be the latest and greatest in many ways, but no phone is ever perfect—and one of its most recently discovered flaws has been found to be affecting many seriously ill users (as reported by 9to5Mac).
According to reports, the Face ID function of the most recent Apple flagship family has been found to frequently fail to recognize patients wearing CPAP (Continuous Positive Airway Pressure) masks. This medically administered apparatus attaches to the nose, obscuring a part of the middle face, and is worn by patients with respiratory issues—something COVID-19 has definitely put on the rise.

While CPAP mask treatment is most well known for being the standard treatment of sleep apnea—which usually occurs outside of regular phone usage hours and doesn’t figure into the Face ID issue—many people stricken with more serious illnesses are confined to CPAP around the clock, rather than just at night.

The modern iPhone’s TrueDepth camera technology works by casting thousands of “dots” onto the user’s face using a dot projector, which are then captured by an infrared camera in the front for pinpoint accuracy in identification.

This is what enables modern Face ID and Portrait Mode photography, and is by no means new to the iPhone 13. It’s been a present feature since the iPhone X, and in the generations since, has had no issue identifying users’ faces even with a CPAP mask hiding their nose. In fact, an iOS 14.5 update in April even allowed iPhone users to scan their face with a regular mask on (as long as they also had an Apple Watch).
According to Colin Hughes (pictured at the top of the page), who suffers from an acute case of muscular dystrophy and has to wear a CPAP mask 24/7, his old iPhone X from 2017 never had an issue recognizing his face (nor did its successors), for four years straight even with the mask on. When he decided to upgrade to the iPhone 13 Pro, however, he found himself having serious problems.

I wear a CPAP nasal pillow ventilator mask, and since day one with the iPhone X, Face ID has never had an issue setting up and recognising me with my mask on. Always worked perfectly. The noise surrounding Covid masks passed me by as I simply didn’t have a problem with my mask and several iPhones from 2017 to present.

Now, I find myself with a 4 year old iPhone X that will unlock my iPhone with my CPAP nasal pillow ventilator mask on, with no problem, and the latest and greatest iPhone 13 Pro that refuses to set up Face ID with my mask on.

Apple has clearly been tinkering with Face ID in light of Covid masks but it’s come at great cost to accessibility for people like me. In trying to set up a new face on the iPhone 13 Pro it says “Face obscured try removing anything that maybe covering your face.” If I do that I will suffocate! I don’t have a plan B.

Apart from the upgraded hardware on the iPhone 13, Apple has also been toying around with the software during the pandemic in order to allow iPhones to more easily Face-ID mask wearers. That seems to have backfired for people like Hughes, however, who have to wear these larger masks to maintain proper respiratory function.

Another CPAP user, Jason McCray (@jmccray), tweeted in response to Hughes’ testimony, claiming that his iPhone 13 took a couple of days to get used to scanning his face with the mask on, and worked normally after that. Maybe in some instances, there’s simply a short period of acclimation to get Face ID working with CPAP, but it’s not always the case.
Apple has put a lot effort in the past towards providing special accessibility features for users suffering from various disabilities, including trouble with mobility, vision, hearing, and cognition. However, sometimes these updates don’t all go to plan and can make things worse for certain people, like Hughes in this case. The Cupertino giant has yet to respond to 9to5Mac‘s request for comment.