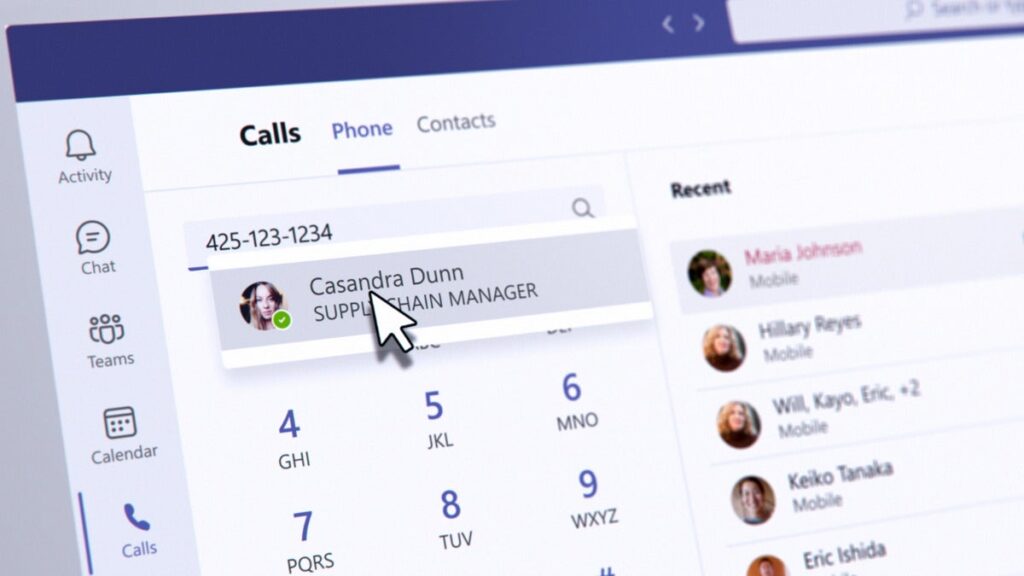 Along with chat and video, audio calls remain an important component of Teams, and there are now 80 million monthly Teams Phone users, Microsoft said. (Teams, which launched in 2017, has a total of 250 million monthly active users, according to stats from July.)

Among the features added to Teams Phone on Monday is the ability to transfer an ongoing call between endpoints such as a desktop computer and mobile device without interruption. Available now, this could be useful when an employee has to leave their desk but wants to continue a meeting call. To transfer the call, a user opens the Teams app on the device they want to switch to and taps to confirm.

“The new hybrid workplace will require tools that let workers be flexible and mobile, moving from the car to the office to the home office,” said Blair Pleasant, president and principal analyst at COMMfusion. “The ability to easily transfer calls between devices is something users have been asking for, and will be especially important going forward as workers move between the office, home, kids’ soccer games, etc.”

Microsoft is also looking to prevent spam calls from becoming distractions with a spam identification feature, now generally available, that’s can identify and decline unwanted calls. It can also “digitally attest” outgoing calls to ensure that Teams Phone calls are not flagged as spam by external recipients.

Also available now is an integration with Apple CarPlay, announced earlier this month, that enables workers to make calls and join voice meetings from their vehicle. The feature can be accessed via a car’s own control system or Apple’s Siri voice assistant.

Also coming later this year is the ability record and transcribe one-to-one phone calls and a walkie-talkie “push-to-talk” function for desk phones.

Microsoft also saie Operator Connect will be available this week. Unveiled at Microsoft’s Ignite conference earlier this year, Operator Connect is an operator-managed service that makes it easier for businesses to connect their PSTN to Teams Phone.

“By maintaining your existing operator relationships, you will save on infrastructure purchase and management, you will benefit from enterprise-grade reliability and shared technical support,” Nicole Herskowitz, Microsoft Teams general manager, said at the Enterprise Connect virtual event this week.

There are currently more than a dozen PSTN operators on Microsoft’s Operator Connect program, with more on the way “in the coming months,” said Herskowitz.

Brandenburg said there are a substantial number of customers that want to move to a cloud-only option for Teams and voice calling while retaining existing carrier relationships. “For this segment of customers, Operator Connect will work very well, alongside Direct Routing for more complex environments,” he said.

Pleasant said that while most Teams Phone customers opt for Direct Routing for PSTN connectivity, many lack the internal skills and expertise required for deployments.

“Operator Connect adds a simpler option for these companies and will most likely be the go-to option for connectivity,” she said. “Microsoft needs to add to its list of carriers and operators for Operator Connect to be more useful, but that will happen over time.”