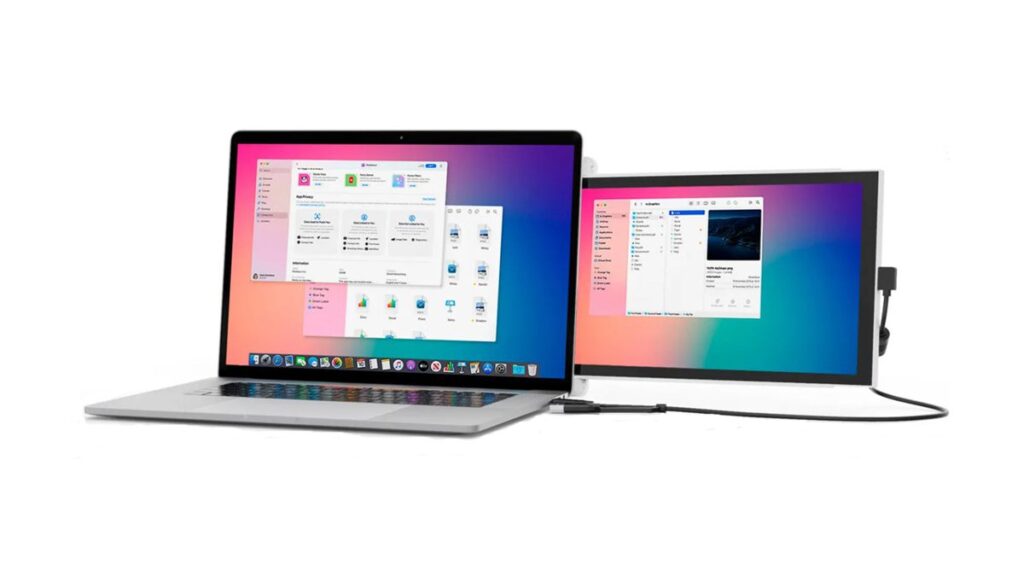 The Mobile Pixels Duex Lite ($269) is unlike most portable monitors in that it’s most commonly used joined at the hip—er, hinge—to the laptop it’s paired with. The Duex Lite can also function as a conventional mobile display a cord’s length away from your computer, and Mobile Pixels even sells an optional stand (the $35.99 Origami Kickstand) for this purpose. Still, its primary configuration is to be attached directly to the back of your laptop, extending all the way out from its right side to form a dual-monitor array. Although this may seem like a sensible arrangement, getting the Duex Lite and its frame to stay affixed to our test Dell laptop proved to be a frustrating—and not entirely successful—task.

Measuring 8.5 by 12.4 by 0.4 inches (HWD), the Duex Lite weighs a mere 1.3 pounds in its frame. The display is offered in a choice of two matte colors, black (which the company refers to as deep gray) and white. Our test unit was the latter. 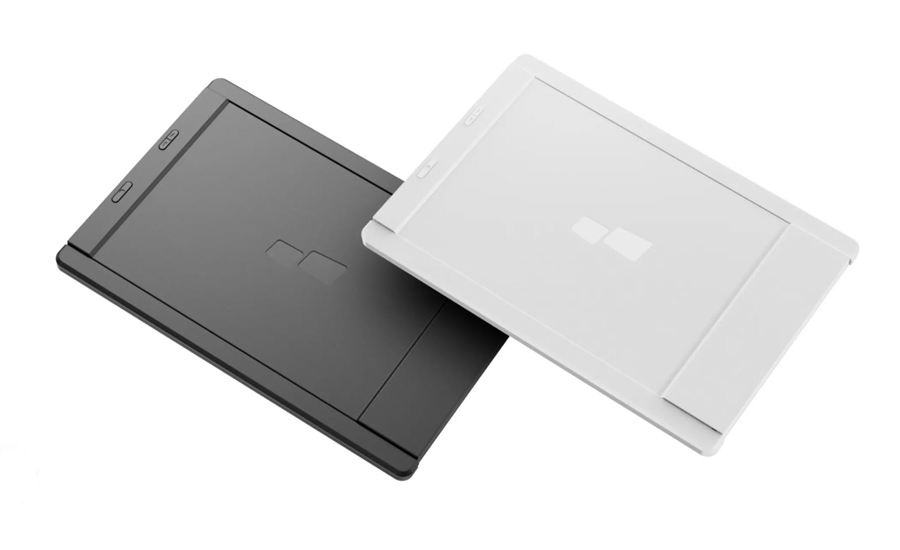 The frame that houses the Duex Lite panel attaches to the back or lid of your laptop, in the center. You can move the frame so its right edge extends beyond the side of the notebook, and the panel can slide to the right until it is free of the laptop. The panel’s left edge is affixed to the frame by a hinge, and the display can either be left straight or swiveled to angle slightly toward the user—voila, second screen! 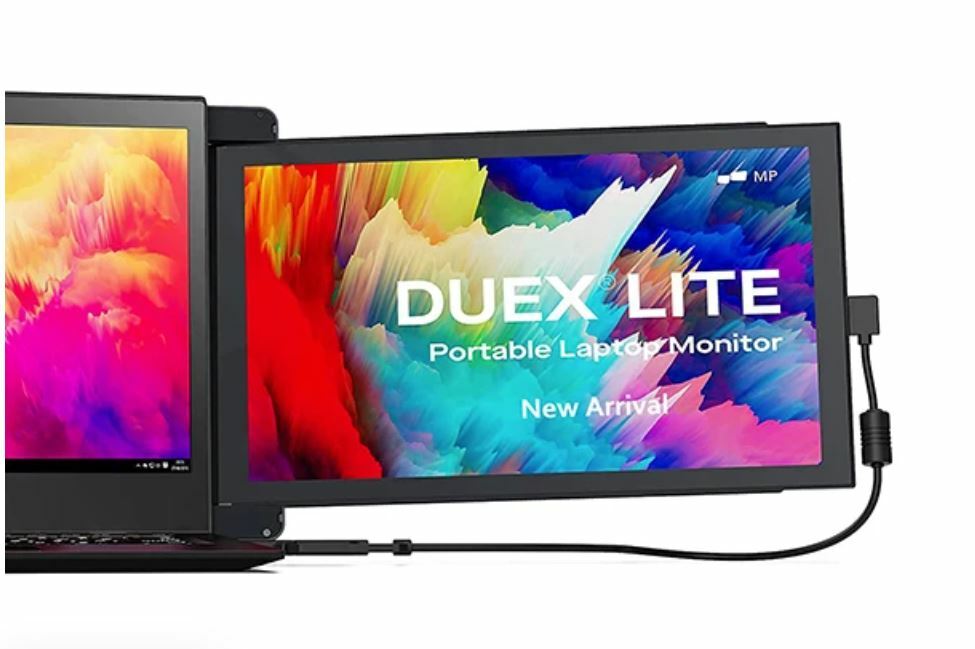 Four small circular magnets attach the frame to the back of the laptop. They adhere to metal plates, each about two inches long, embedded in the plastic frame. One side of the magnets is covered with slightly tacky glue, covered with peel-off stickers. An attachment guide (a cardboard sheet) shows you where to place the magnets on the frame, and—after removing the stickers—how to orient the frame when centering it on the lid and gluing the magnets into place. Once done, you open your laptop, slide the frame to the right, extend the monitor as far as it goes, and either leave the screen extending straight out or swivel it to an angle of your choosing.

Finally, you connect the included three-foot USB-C-to-C cable (with a USB-C-to-A adapter for the computer side, if needed) to the USB-C port on the panel’s right edge, and you’re up and running. The panel will mirror what’s on your laptop’s screen. To get the Duex Lite to work in extended-screen mode requires that you download a Windows or macOS driver from the Mobile Pixels site. After that, you can use your operating system’s display settings to extend or rotate the screen, which can be swiveled from landscape to portrait mode when the stand is laid flat on a desk or table. 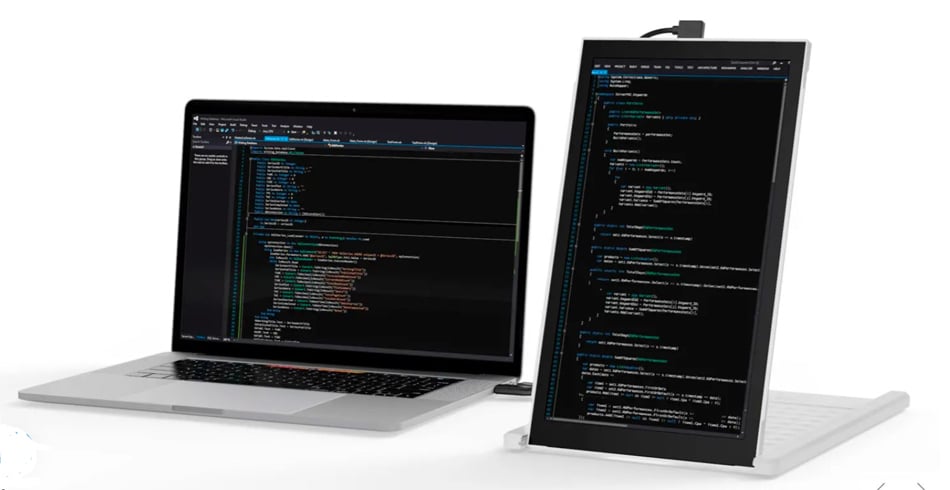 On the back of the panel, near the USB-C port, are two controls: a button, and a bidirectional arrow switch. Pressing the button brings up a simple onscreen display. It contains three sliders controlled by the arrow switch, for backlight brightness, contrast, and saturation. (You get a temperature setting set by default to sRGB and offering a handful of other color temperatures and an eye-care mode.)

Of the portable displays we’ve tested, the Duex Lite is most akin to the SideTrak Portable Monitor, another 12.5-inch panel that also relies on a frame attached to the laptop’s lid from which the screen can be pulled to the right to form a dual-monitor array. Both require downloading a driver for optimal use. But while the SideTrak’s magnets stuck so well they were hard to remove without damaging my Dell XPS 13’s lid, the Duex Lite’s did not always stay glued in place (more on this momentarily).

Let’s return to the job of attaching the frame to the laptop. While Mobile Pixels’ 13.3-inch Duex Plus includes three sets of magnets (12 in all), our Duex Lite came with but a single set of four. (You can buy additional sets of four magnets for $19.99. You may want to get more magnets as a backup, and you’ll definitely want them if you plan to use the Duex Lite with more than one laptop.) The display frame proved to be a little taller (by about three-quarters of an inch) than my XPS 13, so when I affixed the frame to the center of the lid, it extended slightly above and below the Dell’s screen and slightly elevated or propped up the back of the laptop. I gently unstuck and repositioned the magnets, and they fortunately came off without too much trouble. 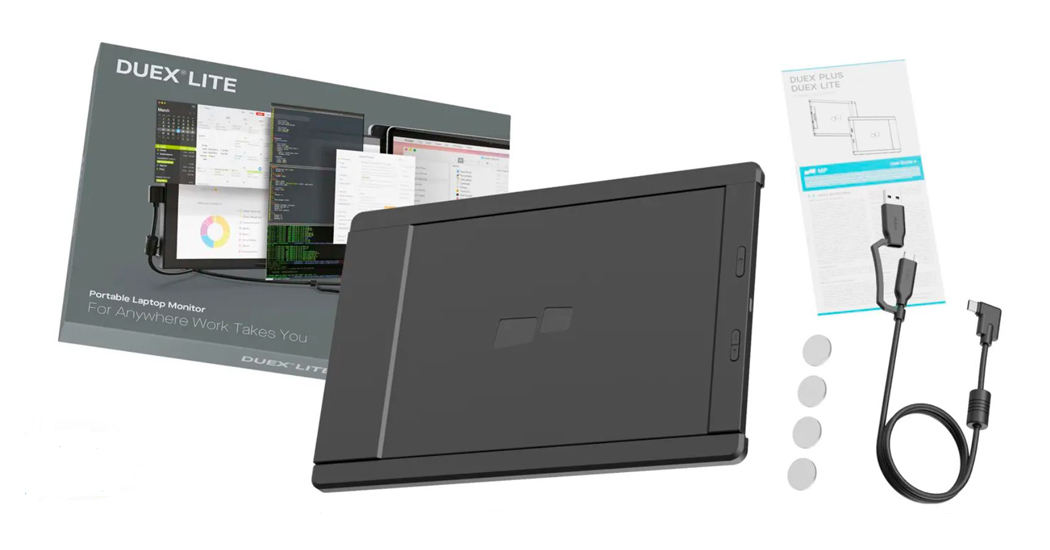 Seating the frame a bit above center on the laptop’s lid worked better, although the frame’s weight tended to pull the lid back and tilt the front of the laptop upward unless I carefully adjusted the angle of the Dell’s screen. I had to conclude that my XPS 13 was a bit too small to pair well with the Duex Lite, at least in landscape mode (with the screen extended out to the side) or presentation mode (in which the screen is flipped in its frame to face an audience in front of the presenter, as in the image below).

To test my theory, I borrowed a larger (15.6-inch) Dell laptop from PC Labs, removed the magnets from my XPS 13, stuck them on their magnetic strips in the frame, centered the frame in the new laptop’s lid, and pressed it down. The magnets, tacky side down, adhered to the lid; I slid the frame and panel to the right, hooked up the USB cable, and downloaded and installed the Duex driver. All worked well for a while, although after a while one of the magnets pulled loose and the right side of the Duex screen drooped until its corner was touching the desk.

This presumably would not have happened had I not already placed and removed the magnets twice before I affixed the frame to the larger Dell. Each time you pull the magnets free, their glue is bound to lose a bit of its adhesion until they eventually can’t support the weight of the frame. This is all the more reason why you should take special care when initially affixing the frame to the laptop’s lid—putting a heavy object atop the frame and lid for several hours is said to help in keeping it glued in place. Again, if you have a 13-inch or smaller laptop, it may be too petite or light to properly support the Duex screen in landscape mode. 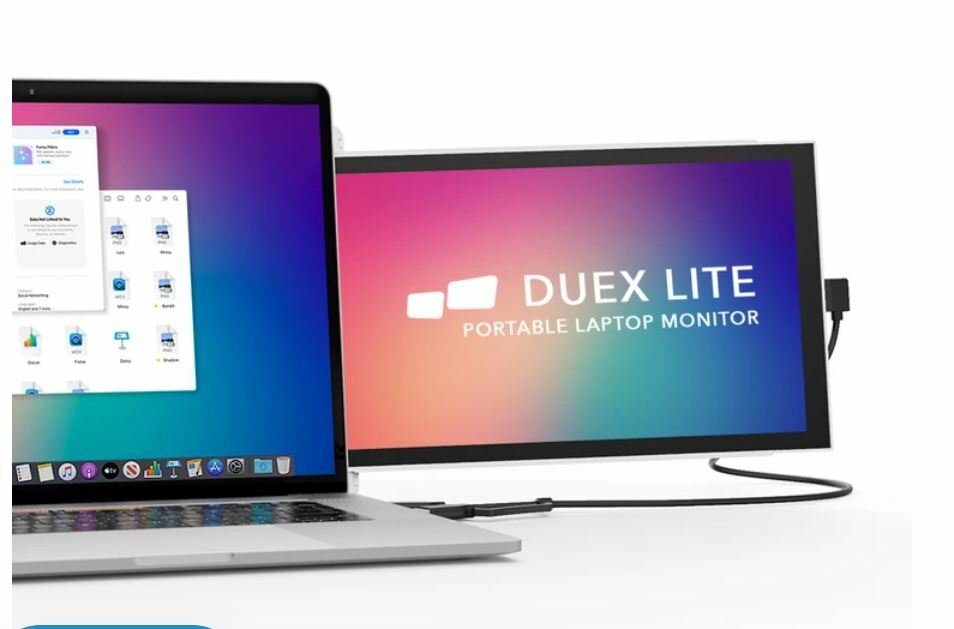 I performed our color and brightness testing using a Klein K10-A colorimeter and Portrait Displays’ CalMAN software. We usually also use a Murideo SIX-G signal generator to create the patterns used in our testing, but because the Duex Lite has just a single USB-C port—which serves both to power the monitor and receive signals from the computer—I generated patterns with the CalMAN software instead.

Mobile Pixels rates the Duex Lite’s luminance (brightness per unit area) at 300 nits (candelas per square meter), but it mustered just 209 nits at max brightness in my testing. Still, this is a typical result for a portable monitor. Many that we’ve tested deliver 180 to 220 nits—the 15-inch espresso Display tallied 202 nits, for example. Brighter exceptions include the Lenovo ThinkVision M14 (280 nits), the ViewSonic VG1655 (245 nits), and the Asus ZenScreen Touch (240 nits). The SideTrak Portable Monitor was one of the feebler performers we’ve tried, with a luminance of a mere 139 nits.

I tested the Duex Lite’s contrast ratio at 997:1, a typical reading for an IPS monitor although much better than the panel’s rated 600:1. 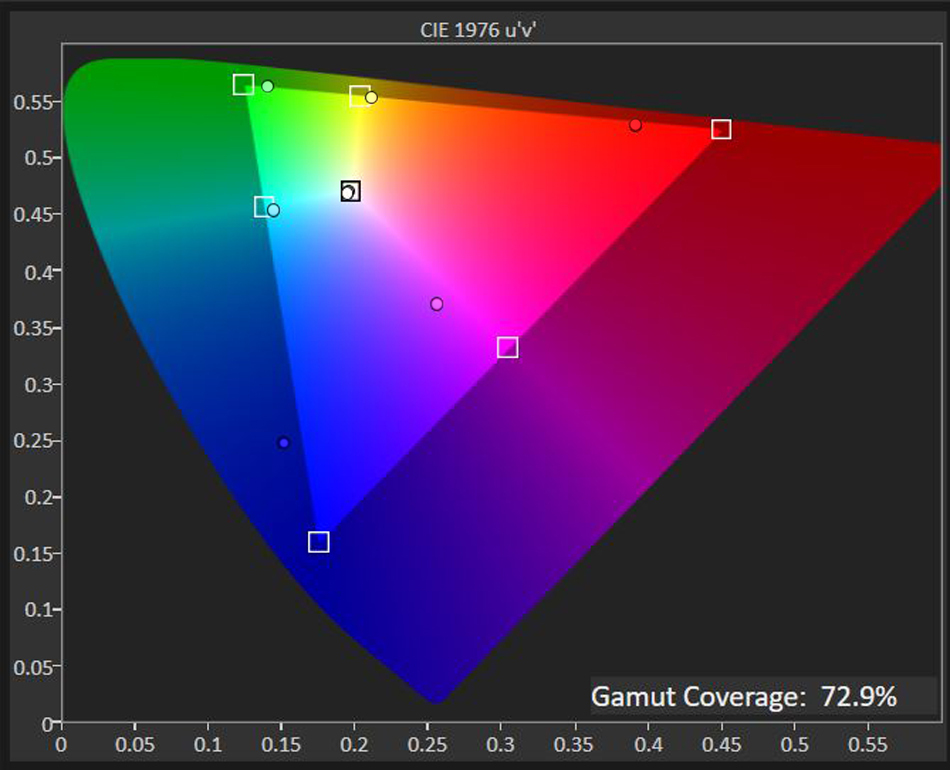 We test most portable monitors in the sRGB color space—the standard gamut for online art and many other applications. Typical general-purpose mobile monitors cover between 60% and 75% of the sRGB gamut, though the Lenovo ThinkVision M14 and M14t managed about 97% apiece and the espresso Display covered a full 100%. The Duex Lite’s 72.9% sRGB coverage isn’t exceptional but is quite good, making it suitable for everyday use. Photos and other images I viewed often had a slight bluish tinge. (See the chromaticity or color coverage chart above.)

A Versatile Yet Challenging Portable Monitor

The Mobile Pixels Duex Lite is a small-screen portable monitor with several different configuration modes, most notably its ability to slide out from its frame to sit side by side with your laptop’s screen. Before buying the Duex Lite, be sure your laptop is large enough to support its frame, and carefully follow the directions in affixing the frame to the lid to minimize the chance of its magnets pulling loose.

The Duex Lite can also be positioned in portrait mode or face away from you for presentations. Its image quality was pretty typical for a general-purpose portable display, with images frequently showing traces of a blue tint. The Duex Lite is clever and versatile, though its signature dual-screen mode proved a bit problematic in our testing. For a more conventional portable monitor with a larger (14-inch) screen, we suggest the Lenovo ThinkVision M14, whose image quality and simple built-in stand are both among the best we’ve seen in a mobile monitor.