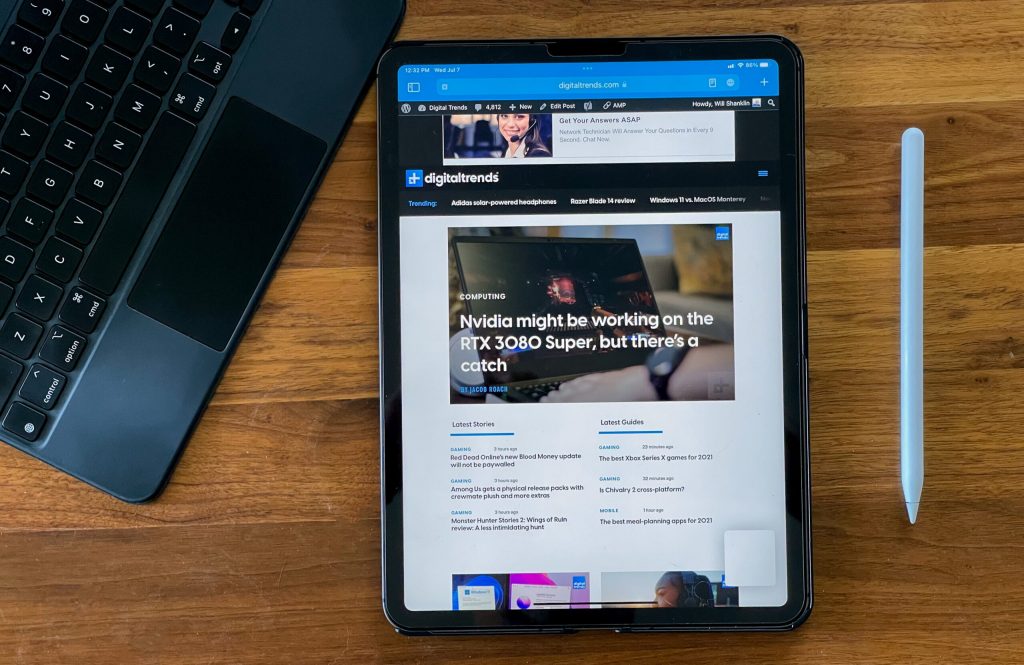 If you want the best and beefiest tablet that money can buy but still save some of that money, look no further than iPad Pro deals. Apple all but created the tablet as we know it, and despite some increasingly stiff competition from brands like Microsoft and Samsung, the iPad Pro is still the king. So if you’re on a quest for Apple deals and tablet deals and you’re specifically honing in on some iPad Pro sales, you’ve come to the right place.

Apple iPads are a hot item and there’s a ton of online inventory to sort through, but we’ve already taken care of the hard part to bring you an up-to-date roundup of all the best iPad Pro deals available today. Need some more advice and details before you buy? We’ve put together a handy shopping guide, too.


Max out the 2021 Apple 12.9-inch iPad Pro with 2 terabytes of storage. This much storage with the powerful Apple M1 chip sets you up for video editing when you’re in the field.


For a portable on-the-go device, the 11-inch iPad Pro can handle all your work and connections. This iPad makes you want to create more with its top-quality performance.


The iPad Pro’s 128GB storage is ideal for people who do light work. It makes you productive with its all-day battery life which means more content making to come.


Backed by a 90-day guarnantee, this Wi-Fi iPad Pro has an 11-inch display and 256GB of onboard storage.


If you need some extra storage, the 5th-gen 256GB iPad Pro 11 model is a great pick. It’s the perfect size for a tablet and packs the latest M1 CPU.


If connectivity is a priority, then you can rely on this 11-inch iPad Pro with Wi-Fi and cellular connections to complement your work and lighten the load.


The latest and greatest in Apple iPad technology, this 11-inch 2021 iPad Pro has both Wi-Fi and cellular connectivity, making it the perfect tablet for any function.

Should you buy the iPad Pro?

The iPad is the most popular tablet lineup on the market and the Pro is the cream of the crop, so if that’s what you’re after, then the Pro is for you. You might think once you’ve got your targets set on some iPad Pro deals that choosing one would be a simple task. But bear in mind that there’s actually more than one iPad Pro on the market and Apple has updated it quite frequently in recent years. There are also multiple configurations and hardware specs to choose from. What that means for those shopping through iPad Pro sales is that there are quite a few decisions that need to be made before you pull the trigger on any of these bargains.

Recent models of Apple’s premium tablet (which are the ones you’ll find most available when shopping for iPad Pro deals) come with one of two display sizes: 11 inches and 12.9-inches. The 11-inch iPad Pro is probably the one you want if you’re looking for a straightforward tablet, while the 12.9-inch is well-suited for pairing with a keyboard for use as a lightweight laptop. Other than size, the other main consideration when deciding which to buy is whether you want cellular network connectivity. This allows you to use your iPad on your data plan, much like a cellphone. Otherwise, you’ll only get Wi-Fi connectivity for using the internet, which is likely all that most people really need in a tablet.

If you’re looking for iPad deals and simply want to buy the latest Pro, then that simplifies things a bit. Apple most recently refreshed the iPad Pro this year, adding its excellent new M1 CPU to the fifth-generation model of its premium tablet, along with some other upgrades like 5G compatibility, Thunderbold 3 and USB 4 connectivity, boosted RAM (8GB to 16GB), and an improved Liquid Retina display on the 12.9-inch variant. The fourth-generation iteration was introduced in 2020 and officially discontinued after the fifth-gen version was released, but they’re not a bad buy and are worth keeping your eyes open for while you shop these iPad Pro sales if you’re willing to save some cash and don’t need all the latest bells and whistles.

The fourth-gen model boasted some notable upgrades and hardware improvements over its predecessor (the third-gen Pro, which was released in 2018), and since it was rolled out in 2020, it’s hard to call it “outdated” even following the rollout of the M1 iPad Pro. Some of the updates Apple made with the fourth-gen iPad Pro include a more advanced triple-lens camera module — instantly recognizable with its square housing on the backside of the tablet — and a more powerful A12Z Bionic processor. RAM is capped at 6GB, though, in contrast to 8GB-16GB on the fifth-gen Pro, although you’ve still got between 128GB and 1TB of storage.

As the largest and most powerful member of Apple’s tablet family, the iPad Pro — particularly the 12.9-inch model — can also pull double duty as a lightweight 2-in-1 laptop when paired with a good keyboard. It won’t replace the trusty MacBook (check out these MacBook deals if you’re after a proper laptop), but it’s a nice option that adds a lot of versatility to your iPad Pro. Both the fourth- and fifth-gen models also have new Smart Connector ports, allowing you to directly connect Apple’s own Smart Keyboard or Magic Keyboard case to the tablet. This eliminates the need for fussy Bluetooth connections or wireless keyboards that require charging. That said, you’ve still got Bluetooth for use with your compatible wireless devices, including any third-party iPad keyboards you’d prefer to use.

The iPad Pro is the best and therefore the priciest model in the iPad stable, so cost is a factor when choosing which one you want (and that’s probably why you’re looking for iPad Pro deals in the first place). Keep retail pricing in mind when you’re shopping so you know a good bargain when you see one. Retail prices for the 2020 iPad Pro were $799 for the 11-inch model and $999 for the 12.9-inch, but you’ll naturally find the last-gen model cheaper among any iPad Pro sales that have these older units still available. For the fifth-gen Pro, the 11-inch pricing is much the same, but the 12.9-inch starts at $1,099, with upgraded hardware specs and cellular data connectivity naturally costing more.

This is retail pricing, mind you, but should be your benchmark for finding a good discount that can knock hundreds off that sticker price. But if even these iPad Pro deals are still too rich for your blood, then you might want to consider shopping for refurbished iPad deals instead. Just make sure you’re getting one that was recertified by professionals and comes from a trusted source.