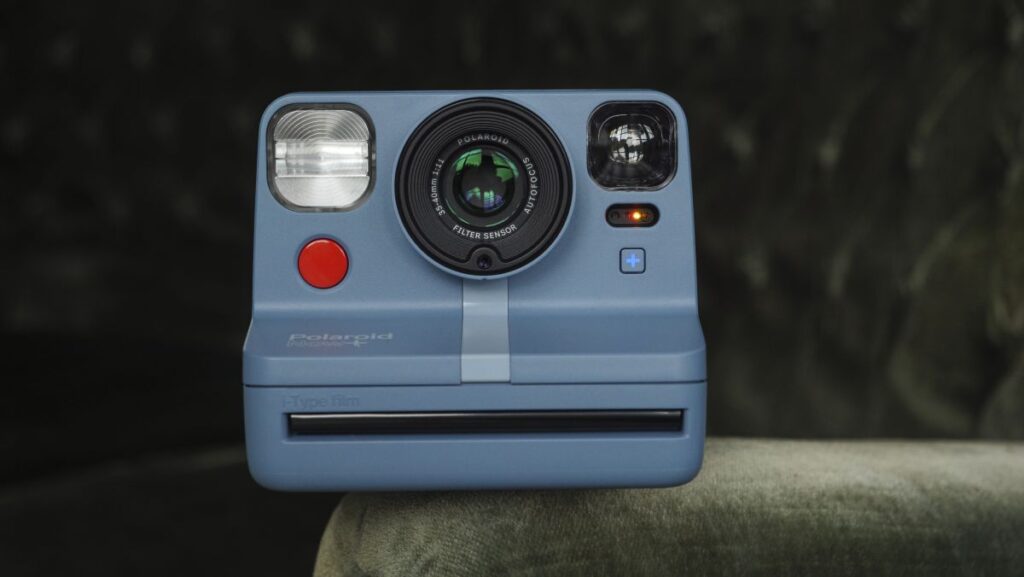 So while the Polaroid Now+ looks like a regular Polaroid Now, the revamped app opens up a whole new realm of creative shooting modes. The Now+ app menu now boasts self-timer up to 12 seconds, double exposure, aperture priority with exposure compensation ±2EV, tripod, portrait, light painting and even manual exposure modes. Depth of field control, long-exposures, all via the remote trigger – there’s much fun to be had.

In addition, the camera comes with a five-pack of clip-on lens filters stowed in a zip pouch; starburst, red vignette, orange, blue and yellow.

Cost-wise, the Polaroid Now+ comes in a tad more expensive than the Polaroid Now and is available in Black, White or Blue Gray – the latter is the model we had. For the extra outlay you get the five-pack of clip-on lens filters, built-in Bluetooth Connectivity (for the free app) and a tripod mount. It’ll set you back $149 / £139 for the camera and lens filters only, while the ‘Starter set’ also includes a triple pack of film (two color, one black and white) and costs $194.99 / £179.99.

However, Polaroid prints are how instant photos should be; a delicious vintage-style square print at our preferred 4.2×3.4in size (with 3.1in image area), much bigger than Instax. Plus, there’s fascination in itself with the complex chemical process bringing the print to full-life over 10-15 minutes (for color prints and about half that for black and white).

In the hand, the Polaroid Now+ is just like the Polaroid Now – it’s bulky for an instant camera, though it does churn out those large prints. You’re most likely to keep it in a bag than your hand, and work it with both hands. The film holders now pops open via a button and film pack slots in with ease, ready to go.

You’ve got a power button and flash button on the rear, the latter is pressed to deactivate the flash, otherwise flash is automatic. This reverse approach makes complete sense for an instant camera that benefits from flash in more scenarios than it doesn’t.

The camera is powered by an internal battery rechargeable via USB – that’s a decent plus point over many other instant cameras. It also means that film packs do not require their own power, though the Now+ does accept classic 600 film.

In the upper left is a viewfinder to compose the shots, though like all instant cameras it’s not directly connected to the lens, so don’t expect the composition to materialize on paper as you see it. In general, keeping your subjects central is enough to get the shot, but for closeup subjects where composition is less forgiving, placing subjects a little to the right of middle aligns the printed image better. (A shooting guide for beginners in the box would be welcome.)

There’s the bold red shutter button and Bluetooth button on the front of the Now+. Bluetooth connectivity is joyously straight forward – load the app, press the on-camera Bluetooth button and you’re connected. Simple. Green and orange lights below the viewfinder indicate a successful connection to the shooting modes of the app.

The autofocus ‘twin’ lens has a 35mm equivalent focal length ‘closeup’ lens with minimum focus distance of 0.4m, and a 40mm ‘standard’ lens with minimum focus distance of 1.2m. Compared to other instant cameras, the Now+ is less suited to selfies, though you can step away from the camera and into the shot via the app’s remote trigger self timer instead, an easier event now a tripod mount is included.

Those lens filters clip-on securely around the lens which is fitted with a filter sensor to adjust exposure accordingly depending on the filter in use – making filter experiments more successful.

Dive into the app and there truly is much to play with. Manual aperture control with a 5-stop range, a shutter speed range of 1/200sec to bulb, exposure compensation ±2EV, remote trigger – these are all serious photography tools. Overkill? Perhaps.

So what of the quality of printed image? In the early days, Impossible Project film unfortunately lived up to its name – it was almost impossible to go through a film pack and create prints with consistent and useable brightness values. Thankfully, things have moved on, though you will need to learn how each I-Type film pack behaves.

Color quality is true to form, Polaroid I-Type film makes for desaturated ‘vintage’ style prints that we like very much. Print format is undisputed, too. At a push, we prefer the colors of Fujfilm Instax film, but it’s subjective.

With the flash active in the automatic point-and-shoot operation, you’ll get prints with rich and plentiful shadows and no loss of highlight detail. In IG terms, a sort of faded, desaturated Lo-Fi filter. If you prefer a brighter look, shooting via the app where exposure compensation is possible can prove a better approach – though results are more hit and miss.

The amount you’re willing to experiment in getting the right shot depends on the depth of your pocket. Filters, double exposure, exposure compensation – you could end up using a whole pack of film to get the effect you want and that’s before you consider the different film packs available.

Putting the plethora of shooting modes aside (a good ‘headache’ to have), it’s important to know that auto exposure behavior – especially with flash – and autofocus performance is for the most part reliable, so the number of throw-away prints are pleasantly few.

Move over Polaroid Now and Polaroid OneStep+, the Polaroid Now+ is our top choice Polaroid camera from the current crop and is definitely worth the extra outlay.

You pay a premium for portability, though. The larger Polaroid Now costs a similar amount, and the entry-level Fujifilm Instax Mini 11 is much less expensive. You could buy the camera itself and five packs of film for the price of the Polaroid Go alone.

If portability is what has stopped you trying instant photography so far, though, then Polaroid Go is likely to be the camera to change your mind.

Should I buy the Polaroid Now+?

You want good-size prints
Film packs are expensive, but there really is nothing else like the Polaroid print. The 3.1in square format image area is framed in a 4.2×3.4in print, bigger than Fujifilm Instax, its main competition.

You want lots of versatility in shooting modes
The Polaroid Now+ offers the Polaroid Now point-and-shoot convenience, but also the choice to experiment with lens filters and the companion app with its range of creative shooting modes. There are some serious photography tools available in the app.

You want impressive picture quality
Thanks to its twin autofocus lens, the Polaroid Now+ is able to render admirable detail, as far as instant cameras go. Look closely and the detail is there.

Money is tight
The camera itself is priced fairly given what it offers, but consider the running cost. At almost $2 / £2 a shot, it ain’t cheap and is much more expensive compared to rivals like those in Fuji’s Instax series.

You need an ultra-portable companion
The Polaroid Now+ retains the classic look that we expect of a Polaroid camera which means it is a relatively bulky bit of kit. Day to day, it’ll find a home in your bag rather than in your hand or around your neck. For something smaller and more kid-friendly, check out the Polaroid Go.

You don’t like expensive experiments
If you really want to discover what is creatively possible via the app and lens filters, be prepared to go through a whole pack of film before you get the result you’re truly happy with.