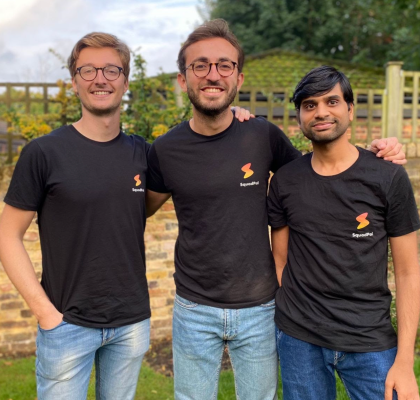 The future of office work, post-COVID-19, is driving plenty of startup activity. Not just around core business needs like comms (Zoom, Slack et al) — but entrepreneurs are also competing to come up with the perfect tool to recreate the social serendipity of office life in order to make dispersed workers feel a bit more connected.

This may actually be an impossible task. The chemistry of real life is a fickle wall-flower that’s hard to encapsulate in app-form (and a lot of office life was of course a total dirge). But that isn’t stopping people from trying. (The ‘Cambrian explosion’ of dating apps, over the past decade, also suggests that hope for meaningful human connection at the convenient tap of an app springs eternal.)

To wit: Meet London-based SquadPal, a “social community” app that’s just raised a £400k pre-seed with a pitch offering a ‘chief happiness officer as a service’. Which does at least sounds a little bit different to all the ‘virtual watercooler’ apps that quickly mushroomed into view as offices shut their doors last year.

SquadPal was also founded in 2020 (August) by Robinson Nouveau, Mehdi Benbrahim and Harshit Jain. Its trio of remote working co-founders have made a simple app for teams to silo some ‘fun’ social interactions — be it a quiz, a game or a baking or ‘who has the cutest baby’ competition — keeping that sort of non-work related yet team-building chatter out of more formal comms channels like Slack and Zoom. Or that’s the idea.

The aim is also to entice workers by offering a dedicated social app for workplace teams vs more ad hoc platforms that could be used for the same sort of stuff, like Houseparty.

In practice every company that’s already using a real-time messaging platform like Slack likely already has a ‘Watercooler’ channel for ‘office banter’ — but, hey, that doesn’t stop entrepreneurs dreaming.

SquadPal’s founders say their app provides a place where teammates can learn more about each other and share personal moments. So of course it features a central feed which shows the latest “activities” from the team.

Here’s Nouveau, SquadPal’s CEO: “We are a Chief Happiness Officer as a Service helping remote teams fight the feeling of isolation and disconnect from their teams. We do this through a fun social community app including competitions, challenges and games. Our mission is to recreate the social life of remote teams online because being physically apart shouldn’t mean you can’t be virtually together.”

The team launched their app in February 2021, initially bootstrapping development. So far they’ve sign up 2,000 users from more than 500 companies.

Since launching the app the startup says it has helped 72% of its active users to be “more engaged” at work. It also says 70% of users reported an improvement in their wellbeing at work.

Most of SquadPal’s current users are fully remote workers but it says it also wants to target hybrid workers and global teams working from different locations — reckoning there will be some 450 million employees working at least two days per week remotely by 2025.

SquadPal says the pre-seed funds will be put towards integrating the app within teams’ workplaces (Slack, Teams, Zoom etc) — so that it’s sitting in less of a silo. The startup also wants to add more curated activities and content for users to “find meaningful ways to connect while everyone is apart”.