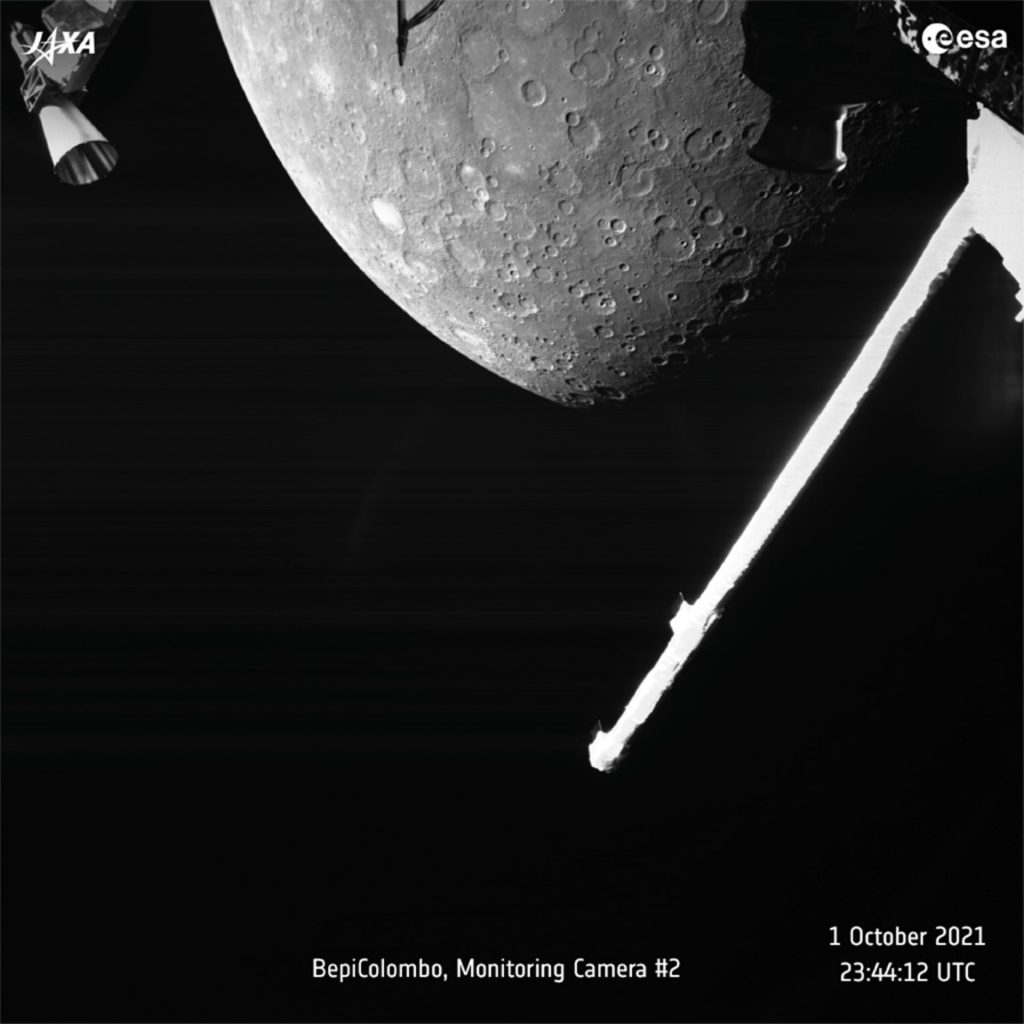 The European and Japanese mission BepiColombo has made its first flyby of Mercury, capturing images of the planet it will eventually be exploring in more depth. In order to get close to the planet, the spacecraft makes use of the planet’s gravity to make increasingly close approaches. It has already made one flyby of Earth and two of Venus, and this was the first of six flybys of Mercury.

As the craft passed by, it snapped images of Mercury using the Monitoring Camera 3 on its Mercury Transfer Module, which captures images in black and white with a resolution of 1024 x 1024 pixels. In the image below, you can see the spacecraft’s antennae and magnetometer boom.

The closest image was taken from around 620 miles from the planet, which is close enough to see impact craters on its surface.

“It was an incredible feeling seeing these almost-live pictures of Mercury,” said Valentina Galluzzi, co-investigator of BepiColombo’s SIMBIO-SYS imaging system that will be used once in Mercury orbit. “It really made me happy meeting the planet I have been studying since the very first years of my research career, and I am eager to work on new Mercury images in the future.”

The flyby was also a chance to check that the cameras and other instruments were working as expected and that everything is healthy with the spacecraft.

“In addition to the images we obtained from the monitoring cameras we also operated several science instruments on the Mercury Planetary Orbiter and Mercury Magnetospheric Orbiter,” said Johannes Benkhoff, ESA’s BepiColombo project scientist. “I’m really looking forward to seeing these results. It was a fantastic night shift with fabulous teamwork, and with many happy faces.”

BepiColombo will now continue making flybys of Mercury, with its next set to occur in June 2022 and its main science mission beginning in 2026.

“The flyby was flawless from the spacecraft point of view, and it’s incredible to finally see our target planet,” said Elsa Montagnon, Spacecraft Operations Manager for the mission.