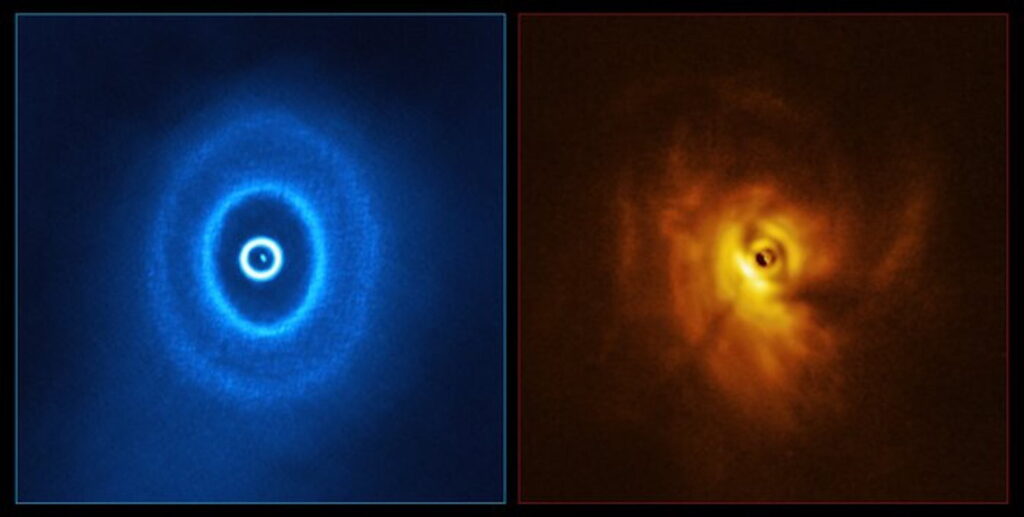 Astronomers have identified a cosmic oddity: What may be the first planet ever discovered that orbits three stars. The GW Ori system is a triple star system, with three stars bound to each other by gravity, and recent observations of the dust ring around the stars suggest that there is a large planet orbiting all three of them in what is called a circumtriple orbit.

In the image below, you can see the dust rings around the triple star system which gave astronomers a clue that there may be a planet orbiting there. There is a noticeable gap in the dust ring, which suggests the presence of a massive planet. The image on the left was taken using the Atacama Large Millimeter/submillimeter Array (ALMA) telescope in Chile, and has been processed to show the dust rings in the best clarity. The image on the right shows how the innermost ring casts a shadow across the rest of the dust ring.

To understand this unusual system, astronomers from the University of Nevada, Las Vegas, used the data collected by ALMA to create a model of the system. They considered various possibilities of what could have caused the gap in the dust rings, such as the idea it could have been caused by the gravitational forces of the three stars in the center of the system.

But the most likely explanation for the finding is the presence of at least one large planet, similar in size and mass to Jupiter. Although the system is too far away for the planet to be detected directly, this was the model which best fitted the data. The researchers hope to collect more observations using ALMA in the future to confirm whether there is in fact a planet there.

“It’s really exciting because it makes the theory of planet formation really robust,” lead author Jeremy Smallwood said in a statement. “It could mean that planet formation is much more active than we thought, which is pretty cool.”

The research is published in the journal Monthly Notices of the Royal Astronomical Society.