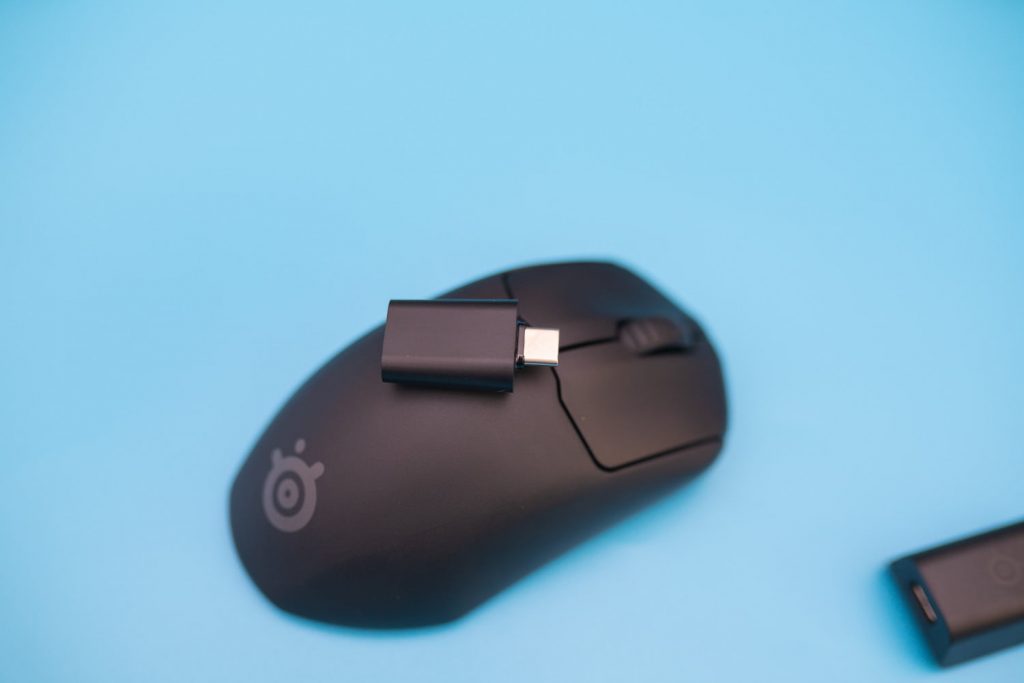 “The $130 SteelSeries Prime Mini Wireless feels a step below other esports mice.”

You don’t normally think of high-end esports mice in a portable form, but that’s what the SteelSeries Prime Mini is. It takes the light ergonomic design of the Prime Wireless and cuts it up to create a gaming mouse that’s not only smaller, but lighter, too.

SteelSeries didn’t cut features out to achieve a slim form. The Mini still packs the same sensor, optical magnetic switches, and buttons as its full-size counterpart. With both mice at the same price, though, the Prime Mini feels like a downgrade for most hand sizes.

That’s not to mention how it stacks up to the best gaming mice. Although a high-end esports mouse with a spec sheet to match, the Prime Mini doesn’t reach the same heights as its competitors. Its design and switches are second to none, though, which may be worth it if you pick up the full-size model.

There aren’t a lot of mini gaming mice around, and the SteelSeries Prime Mini doesn’t change that despite its name. It’s only slightly smaller than the full-size Prime, shaving 1.7mm on the height, 1.7mm on the width, and most importantly, 5mm on the length. It also cuts down the weight from 80 grams to 73 grams. That’s light, but not as light as the Logitech G Pro X Superlight at 63 grams.

The difference is the length, where the Prime Mini shaves about 5mm off mice of similar caliber. The change to the height never bothered me, but the length and width did. Even with smaller hands, it never felt like I had enough to hold onto in palm grip, with the back end of my palm slipping off the mouse onto my desk. Similarly, the smaller width meant that I was dragging my pinky along.

I really missed the extra length and width on the Prime Mini.

Claw grip was a lot more comfortable, which is the case with most smaller gaming mice.

Still, I can appreciate the design. The Prime Mini feels like the Corsair Sabre Pro Wireless with a more aggressive slant. The right side of the mouse juts out on the back, and there’s a fairly deep indent on the left for your thumb.

I love the design and how the mouse feels — it comes with sturdy plastic that doesn’t feel hollow like the Razer Viper Ultimate, and it rested almost too well in my palm. I just wish I could have experienced the design in its proper form. I really missed the extra length and width on the Prime Mini, which ruined what would otherwise be probably one of my favorite gaming mice.

SteelSeries says the Prime Mini comes with “crispy clicks,” and they are the crispest clicks I’ve ever experienced. There’s a loud, satisfying snap with each press, which is due to the Prestige OM optical magnetic switches under the hood. The Razer Basilisk V3 has optical switches, too, but they don’t feel as crisp as the Prime Mini.

Because the switches are optical, they aren’t subject to debounce delay like mechanical switches.

This is my favorite aspect of the Prime Mini. The switches are as satisfying as can be, and because they’re optical, they aren’t subject to debounce delay like mechanical switches. SteelSeries rates the lifespan for 100 million clicks, too, doubling the 50 million click lifespan on most high-end gaming switches.

In addition to left- and right-click, the Prime Mini comes with forward and back thumb buttons, as well as a DPI button to toggle through the five customizable presets. The DPI button is on the bottom side of the mouse, which is annoying, but it makes sense. This is an esports mouse, and you don’t want to bump your DPI around in the heat of battle.

The switches are the star of the show while the sensor takes a back seat. The mouse comes with SteelSeries’ TrueMove Air 18K DPI sensor, which you can adjust in 100 DPI steps. At $130, that’s behind the curve. The Logitech G Pro X Superlight has a 25K DPI sensor, and the Corsair M65 RGB Ultra Wireless has a 26K DPI sensor. The Corsair mouse has a 2,000Hz polling rate, too, while the Prime Mini is locked to 1,000Hz.

It’s accurate and fast, but not as much as the competition.

The Prime Mini comes with Quantum 2.0 Wireless technology, which offers “performance that feels just like wired,” according to SteelSeries. Although I’m far from an esports player, the wireless connection never posed a problem in Destiny 2 raids or my recent addiction to New World.

SteelSeries claims 100 hours of battery life, likely due to only a strip of RGB lighting around the scroll wheel. After using the mouse for almost a week, I only knocked off about a third, so you’ll have a lot of time between top-ups. Plus, the mouse supports fast charging through the USB-C port.

Quantum is your only option, though. Despite a trend toward Bluetooth and low-latency wireless on mice like the Logitech G604, the Prime Mini only comes with SteelSeries’ wireless connection. That’s not a huge deal, but I always like having Bluetooth as an option for using the mouse with my home theater setup.

The wireless is solid, but I can’t wrap my head around the wireless dongle. It uses USB-C instead of USB-A. Most motherboards only come with a single USB-C port, and only the most recent cases come with a USB-C port upfront. I have a lot better things to occupy my USB-C ports with than a wireless mouse dongle.

Worse, it’s a big dongle. It’s about an inch long ignoring the connector, which compares to about a quarter on an inch on Corsair and Razer dongles and a third of an inch on Logitech models. The Prime Mini is primed for travel given its small and light design, but there’s nowhere to store the dongle on the mouse like there is with basically all other high-end wireless gaming mice.

SteelSeries includes an adaptor so you can hook it up to your machine with USB-A. This just doesn’t feel like the best solution. I would’ve much preferred a USB-A dongle I could store underneath the mouse instead of a chunky USB-C one that’s just waiting to get broken while plugged into my laptop.

I have some niggles with the Prime Mini, but there’s no denying it’s a solid gaming mouse. There’s tactile feedback with any mouse, but I felt it on the Prime Mini. Each shot in Destiny 2 or in my endless runs of Deathloop felt like they mattered, with the Prestige OM switches bringing a sense of depth to every click.

That’s not the reason to buy this mouse, but it’s a nice bonus given the mouse’s overall gaming performance. The sensor may fall behind the competition, but it’s still fast enough to hold up in twitchy shooters like Valorant and sweep around the screen to activate a skill in Final Fantasy XIV.

The Prime Mini is tiny, sturdy, and light.

Size proved to be an issue once again, though. I found myself wanting to switch back to my tried and true Razer Viper Ultimate while playing just so I had a little more to hang onto. The Prime Wireless and Prime Mini Wireless are the same price from SteelSeries, and I’d recommend sticking with the full-size model for most hand sizes.

For gaming, I could see myself using the Prime Mini Wireless while traveling. It’s tiny, sturdy, and light, making it an excellent high-end travel companion for gaming. As mentioned, though, the large dongle and lack of storage for it puts a damper on the travel experience.

The SteelSeries Prime Mini Wireless is a gaming mouse of high quality and unfortunate design decisions. The shape is remarkably comfortable, but it’s too small, and the optical magnetic switches are excellent, but they’re paired with a sensor that falls short of the competition. It’s not a bad mouse, but it’s not the best — and at $130, being the best is important.

Are there any alternatives?

The SteelSeries Prime Mini trims about 5mm off of the length of most competing mice, so there aren’t many direct alternatives.

If you don’t mind a little extra length, it squares off against the Corsair Sabre Pro Wireless, Logitech G Pro X Superlight, and Razer Viper Ultimate.

How long will it last?

The Prestige optical magnetic switches are rated for 100 million clicks. Assuming 10,000 clicks a day, that comes out to just over 27 years before the mouse wears out. Basically, it will last until you decide it’s time to upgrade.

Should you buy it?

No. The full-size Prime Wireless will be more comfortable for most people, and it’s a decent option at $130. The one exception is for those with small hands. There aren’t a lot of small, high-end gaming mice. The closest competitor is the Logitech G305, which is cheaper, but also heavier and with lower specs. Otherwise, pick up the full-size version.