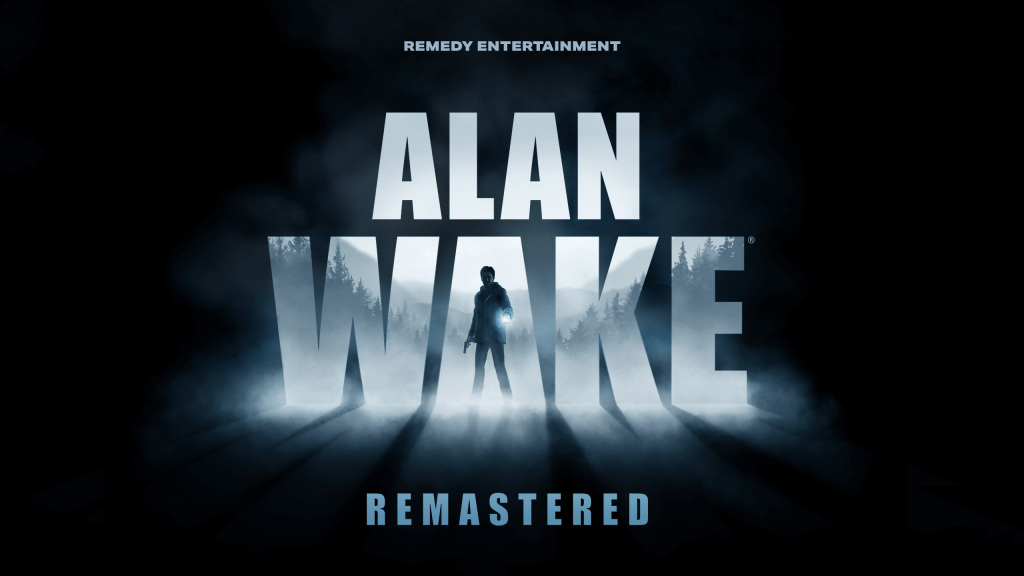 Here’s the thing with me and Remedy Entertainment. I’m not exactly a big fan of their work as opposed to other game companies. Do I controversially think that the games they make are all bad? No. I just never really thought much of their works. However, the exceptions to this rule are the first Max Payne game and Alan Wake.

Alan Wake has always had this sort of intriguing aura about it that makes me want to return to it. I was even one of the few people who had that dumb Windows 7 Alan Wake theme used to promote the game when the PC version was announced. I always thought that the game’s story, mechanics, and characters were unique, and the mysterious plot details kept me intrigued.

It’s been 11 years since the release of Alan Wake, and now, PlayStation users will finally get to try out one of Remedy’s finest games. How does it stack against the original? Will there be something that will convince players to get it on Xbox Series or the Epic Games Store? Let’s return to Bright Falls and see what’s in store. 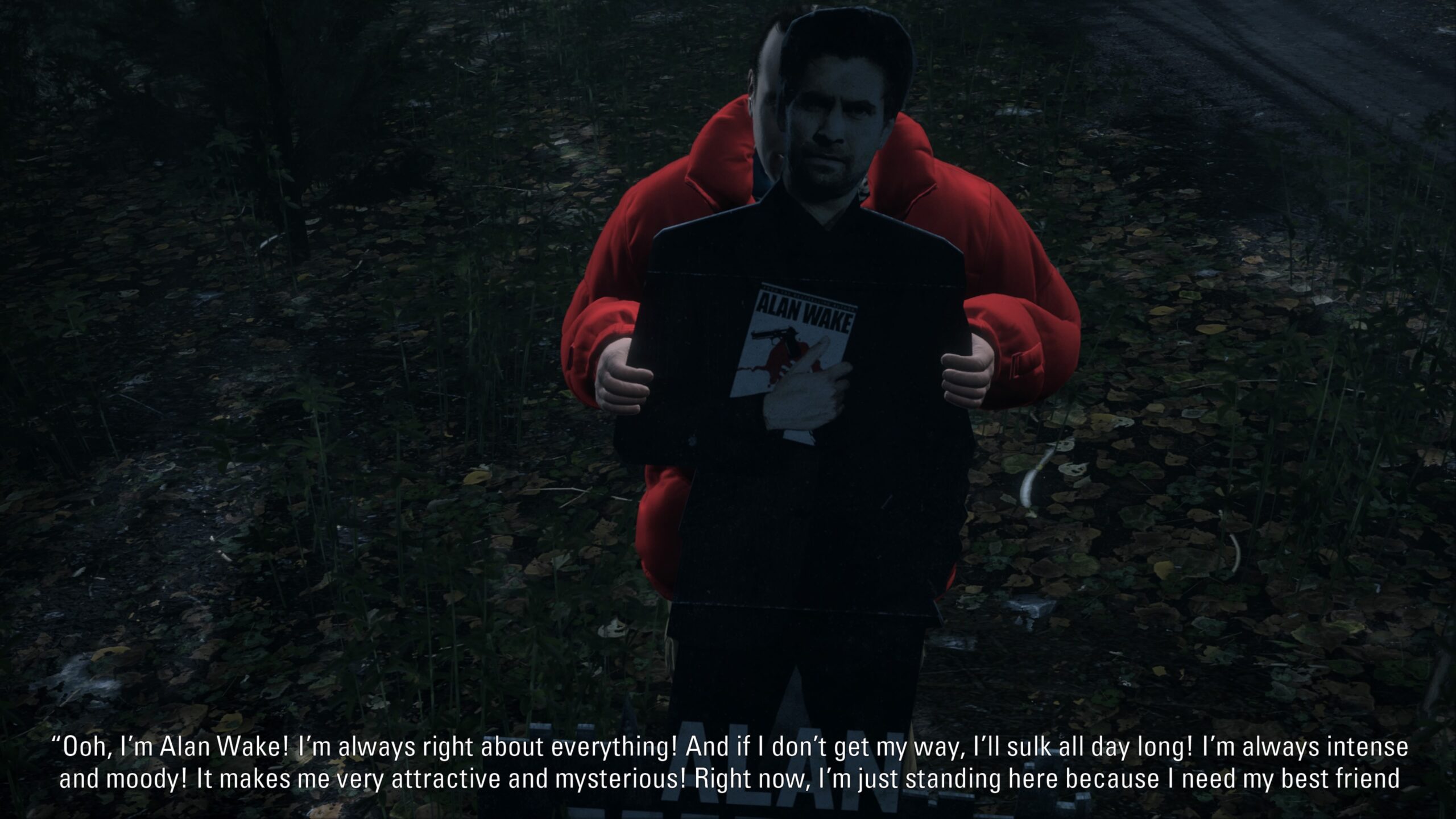 Unlike my other reviews, I won’t be delving too much into the story of Alan Wake Remastered. The main reason is to keep spoilers at a minimum for potential newcomers to the game. However, I will provide my thoughts on what happens alongside a summary of the plot’s central premise.

The player controls a novelist known as Alan Wake. He is an award-winning author with an impressive catalog of books that essentially turned him into a pseudo-celebrity. Unfortunately, Alan is soon faced with an immense case of writer’s block that effectively kept him from writing a single word for years.

Concerned, Alan’s wife, a photographer named Alice, decides to take Wake on vacation in the idyllic town of Bright Falls, a small mining town located in Washington. However, as luck would have it, Bright Falls has been the host of many strange occurrences that even go into the supernatural.

Naturally, Alan Wake becomes involved in one of these incidents. His wife mysteriously disappears, and he also finds pages of a manuscript for a thriller that he penned. Strangely, Alan doesn’t seem to recall writing any part of this novel. With all this in mind, Alan Wake sets out to fight against the forces of darkness to not only find Alice but also to find the truth behind the novel he supposedly wrote called “Departure.”

Alan Wake’s story is filled with many twists and turns alongside riveting character moments in which we learn more about Bright Falls and the Dark Presence that haunts it. The game is made with suspense in mind, and the way the plot is integrated into the gameplay is very clever, in my opinion.

As the player progresses through the game, they’ll find several pages of Alan Wake’s manuscript. These pages often tell events that will happen or provide additional context as to what other characters felt at the moment off-screen. This is ingenious as the main plot can focus on Alan Wake and his story while leaving the additional context and side character plot points to supplementary material narrated by Alan himself.

Of course, some people would say that this method of storytelling would spoil the ending of the game and such. However, I believe that this is more of a “Journey over Destination” type of thing where the more important part isn’t exactly the twist but rather how the players get there (or if it shows up at all onscreen). 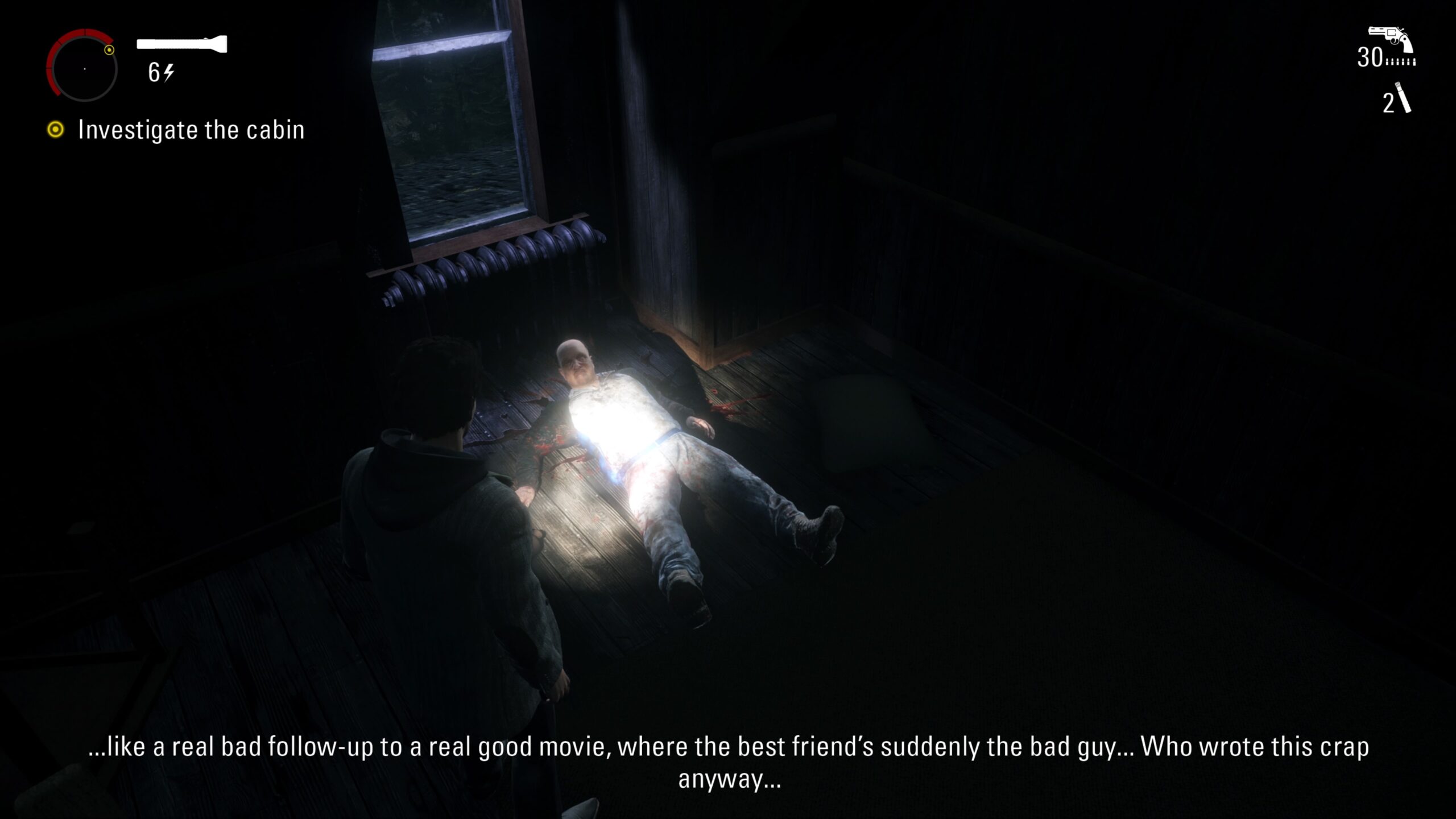 Alan Wake Remastered uses the third-person over-the-shoulder camera that was pretty common in shooter games of its time. Players can find several weapons to defend themselves against the forces of darkness. However, an essential tool in Alan’s arsenal is his flashlight.

That’s because the Dark Presence is pretty much intangible unless you render it vulnerable through the power of your flashlight. By training the flashlight on the enemy and pressing L2, you’ll be able to focus the light from the flashlight onto the enemies, eventually making them vulnerable and allowing you to finish them off with a few shots from your other weapons.

The weapons themselves range from a revolver, a shotgun, a hunting rifle, and some special weapons which can end up being a massive help against hordes of enemies. The enemies themselves are aggressive but not exactly bright. Their attacks are telegraphed enough to allow you to dodge them quickly, and by themselves, they don’t pose much of a threat.

However, the game will swarm Alan with hordes of enemies, flocks of birds, and even throwing environmental objects such as barrels at him. It’s pretty easy to get overwhelmed by the enormous number of enemies and hazards. Since Alan Wake himself is frailer than a twig, don’t be surprised if you end up dying a few times because you got hit by five enemies at once.

Of course, you will have access to some pretty cool crowd control weaponry for things like this. In this case, we have the special weapons I mentioned earlier: the Flares, Flashbangs, and the coveted Flare Gun. Each of these weapons can pretty much deal with entire crowds of enemies in seconds while giving you some room to breathe and prepare for the next assault.

“Well, there has to be a limited ammo system for these weapons, right?” See, that’s the thing with Alan Wake. Did you notice how I didn’t mention that the guns run on ammo or that the flashlight runs on batteries? Well, that’s because the game gives you way too many resources to fight against the enemies themselves.

If you have a slight sense of exploration in you (and you’d pretty much need to if you want to get this game’s collectibles which range from pages of the manuscript, coffee thermos, and more), you’ll end up finding caches that are packed to the brim with Flare Gun rounds, flashbangs, and ammunition for your guns.

I never really found myself running dry with any of my weapons in the Normal difficulty. I’d say play the game on Nightmare if you want a more challenging experience, but you need to complete the game first to unlock it, so we have to stick to Normal. However, since I’ve beaten the game on Nightmare difficulty on its Steam release, I can tell you that even then, the game’s way too generous with its resource drops.

The same logic applies to the flashlight’s batteries. You can carry up to 20 of these. Still, you really will almost invariably find yourself capped because the game gives you plenty of them, and energy does replenish over time when the flashlight isn’t being focused on the enemy. 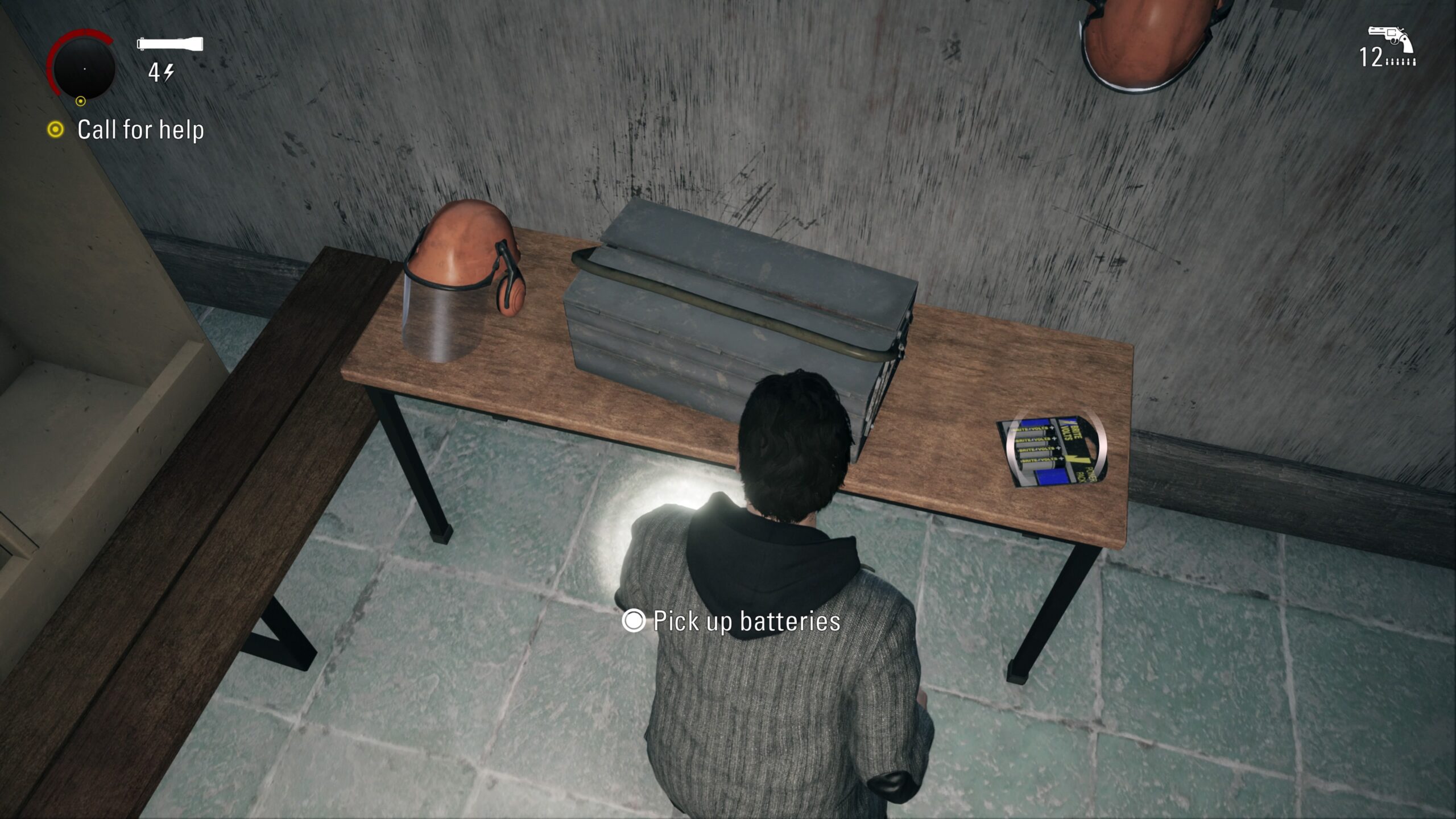 The real challenge of Alan Wake Remastered comes from your tolerance to pain. Not pain inflicted to you by the enemies, but the pain brought by the game’s janky mechanics. This is both a positive and a negative, by the way. Sometimes, the enemies are clumsy enough to walk into a power fence and electrocute themselves to death. Sometimes you find yourself hit by multiple enemies at once and dying because you are constantly locked in inescapable hitstun.

None of my readers should be surprised when I say that I both love and hate this game’s jank. It made for some comedic moments in my playthroughs. However, I believe that some players might find those occasions where the jank works against them to be infuriating. It’s weird because I expected Remedy to work on this aspect the most while remastering the game.

The game is also filled to the brim with collectibles. Many of which require you to stray from the main path to find them. You can also stumble upon some neat bits that expand on the game’s universe, like radios which play some radio shows, or TVs that play my favorite “I wish this were an actual TV show” show, Night Springs.

Do I think the collectibles are excessive? I’d say they are harmless. But to be frank, some players will want to get through the story rather than collecting some knick-knacks. I guess at that point, that’s up to the player. 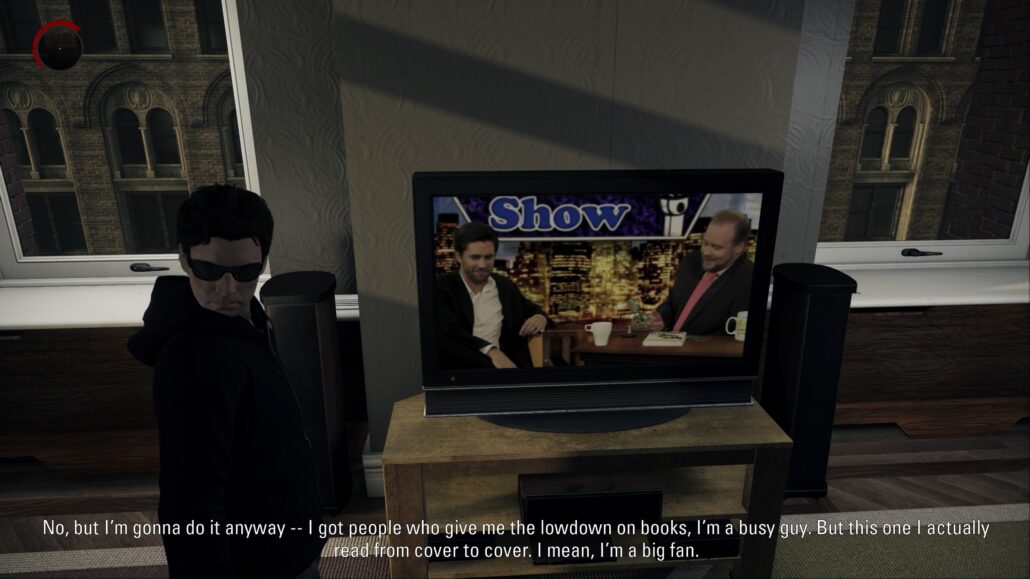 Alan Wake Remastered runs at a smooth 60FPS. I had the experience play without some stutter throughout. So, you should feel safe playing the game and experiencing the jank that comes with it. When it comes to the cutscenes, however, it’s a different story. The gameplay below will show what I’m talking about, but the cutscenes run at 30FPS (sometimes even lower for some reason).

I don’t exactly understand why that is the case, but my theory is that the development team took the cutscenes from the original game and brought them here instead of redoing them with the current graphics. At the end of the day, it’s much easier to get a video file of the previous cutscenes rather than making the scene again altogether from scratch.

Alan Wake: Remastered doesn’t support Ray Tracing; that’s one of the most significant points of contention in this version of the game. Do I think it would have been necessary? Well, for a game that’s all about using lights against your enemies, I’d say yes. You want to have the most detail on the flashlight and light sources, after all.

I also have a few issues with some of the newly implemented textures. Some of the characters look a bit “Plasticky” for my liking. It’s weird because I’m pretty confident that these issues weren’t always present in the Steam release. 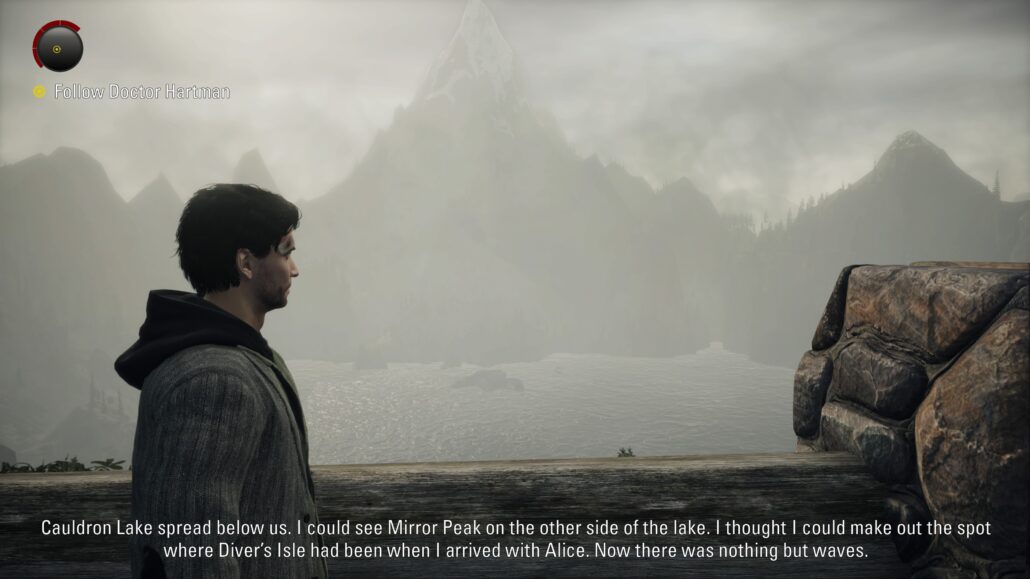 So, where does that leave us with Alan Wake Remastered? Well, I still think that the game is worth experiencing for players looking for a mysterious thriller/horror game experience to play. However, when it comes to the remaster itself, I’d say it focuses more on the “Graphical updates” than bringing other things like QoL out of the way.

The game’s still as I remember, and I love the beautiful scenarios that this game brought by itself. Please make no mistake; Alan Wake’s been a beautiful game since the day it was released. I believe that PlayStation users will end up agreeing with me in that sentiment once they have their hands in this game.

Will returning players be happy with the few changes made? Well, I have been neglecting to say it, but there are a few more additions that returning players will be pleased to find. Remember those QR Codes plastered in some places in the original version? I’m just going to say that they were changed in some way.

I won’t say anymore regarding this, but there have been very subtle (but impactful) changes like this made throughout the game’s entirety. Most of which warrant a new playthrough by the old fans of the game. But if you want to have a sincere opinion, I’m telling players to buy the game for what it is rather than for what the remaster brings.

As a remaster, it’s pretty lackluster. But the game itself is fantastic, with janky faults and all.

Reviewed on PlayStation 5 (code provided by the publisher).

Alan Wake Remastered is the perfect way for PlayStation 5 users to experience the story of Alan Wake. However, players looking for a refreshing experience might find themselves with a bit too much of the same thing that’s been seen in previous versions of the game. At the end of the day, I am recommending this game for what it is over what the remaster offers.