Good Doggo! These Are the Most Pettable Pups in Video Games 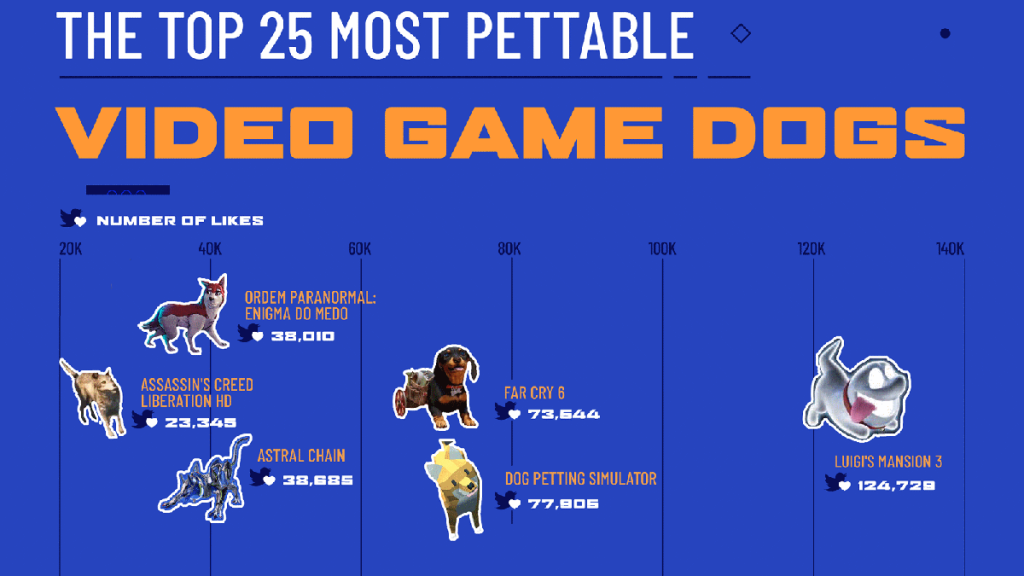 Dogs became uber-popular during the pandemic. Everyone stuck at home needed someone to snuggle, and since people are gross and disease-ridden, there was a run on the pounds and shelters of America as puppies were adopted en masse. Which worked out great until this summer, when a lot of people went back to work. This is why we don’t deserve nice things.

But what if you could have an all-digital pet for petting? That’s a bit of the impetus for the research in these infographics provided to us by Protect My Paws, a website that helps people find pet insurance plans. It wanted to know which virtual canine found in video games—and there are a lot—would be the favorite. How do you determine such a thing? You go to the Twitter account @CanYouPetTheDog, which catalogs pettable pooches found in games across all platforms. In June, Protect My Paws checked a bunch of posts to added up the number of favorable mentions for each game-dog and came up with some interesting lists.

The top grouping shows the 25 most-pettable dogs across all the platforms. The top favorite is the earless Polterpup from Luigi’s Mansion 3 on the Nintendo Switch. He’s definitely scoring high for cuteness, even though the pettableness of a ghost dog is suspect. Any dog found in the free PC game Dog Petting Simulator is a runner-up—all are designed with petting in mind, so that’s no surprise. Other game dogs come from Far Cry 6 (Chorizo), Monster Hunter Rise (Palamute), and Overland (a game in which you can earn a badge for petting a dog).

If you want to know the dogs to pet by platform, the organization provided individual lists of digital dogs for PC games, PlayStation, Nintendo Switch, and Xbox.

Of course, not all canines are cuddly. Protect My Paws also listed the video game dogs that gamers absolutely can’t pet, usually because such dogs are antagonists in their games. The top dogs you shouldn’t touch in a video game include hellhounds from Doom Eternal and Shadow of the Colossus, as well as the rabid creatures found in Bloodborne.

Ultimately, neither you nor I will ever really pet any of these game canines (well, until we get some Ready Player One–Ready Player One–style haptic feedback when encountering VR dogs with Pixar-level hair). Until then, practice up on your real-world petting. You may have been doing it wrong your whole life.