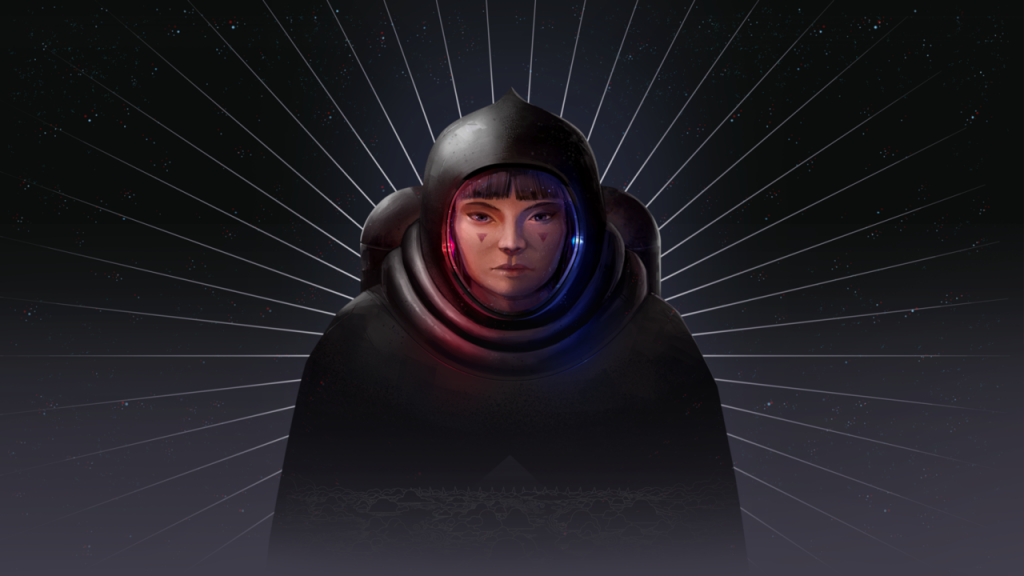 There’s a plan to work and it’s time to work that plan. That’s all I can think of as I’m skimming over the ocean, piloting a jett (a type of jet aircraft) towards a destination in the opening minutes of Jett: The Far Shore. Protagonist Mei and her copilot clearly know the plan, but I–the player–do not. Mei has just left home, a secluded village that speaks highly of her for being chosen as the anchorite that will be a part of a scouting party for a space expedition heading to a place called “the far shore.” I continue towards the far-off waypoint without really knowing why I’m racing towards it, taking my copilot’s advice to practice maneuvers ahead of reaching the giant spaceship that will take us across the universe.

The fact that Mei’s people are planning an exodus from their planet–one that appears full of pollution and harmful industrialization–to a distant destination in what I can only presume is an attempt to escape a dying world is already an intriguing premise, but the one-off comment that Mei is important for this journey solely because of her role as a religious recluse pushes me to quickly get through Jett’s prologue. There isn’t a mystery here, not in the literal sense, but I’m still left wondering what’s going on, as no one is needlessly expositing information–a plan has been in place for years now and I’m just now stepping in to control Mei as she sees it through. And I want to see that plan through, if only in hopes of the process uncovering the reasoning for that plan.

It’s an intriguing start to Jett, a cinematic action adventure game that sees you pilot a scouting ship across multiple islands located in the ocean of an alien planet. It’s a pretty game–and its visual display is enhanced via a stellar soundtrack composed of soft melodies, setting an oftentimes somber tone for your journey over the world’s stylish landscape–but the story falters on delivering a compelling narrative payoff and the gameplay is too restrictive when you’re not soaring through the air. I saw the plan through and I discovered the reasoning for the plan, but my satisfaction in that moment was largely dulled by the journey I took to get there.

Most of Jett is spent flying your jett, your primary means of navigating the in-game world and interacting with its fauna and flora. The ship glides above the ground, satisfyingly responding to your inputs as you surge forward, and there are various maneuvers that you can attempt to give your flying a bit of flourish, such as popping your boosters to leap over obstacles or reversing your thrust to drift around corners. Push your machine too far and you may crash and damage your shield or overheat and stall your engine–consequences that can leave you at the mercy of the world’s harsher environmental elements or dangerous predators. But pulling off these tricks can reward you with a wonderful boost of speed or send you soaring over danger.

When flying over the open sea or across the valleys and mountains of the islands, controlling your jett is a wonderful sensation. It was always exciting to be given a new flight destination and see that it was far away, knowing I was being given another chance to push Mei’s jett to the limit and race through the air, taking in the sights and sounds as I went. Rarely do waypoints encourage you to race against the clock (on rare occasions, a chasing creature or an approaching dangerous phenomenon will task you with racing ahead) as Jett is largely a casual journey, but it’s fun to cut loose every once and a while and push yourself. It’s exhilarating to pull off a maneuver you struggled with before–your growing experience rewarding you with the know-how to pull off increasingly thrilling stunts in pursuit of your next destination.

Too often, this freedom to soar is taken from you, though. Mei is regularly tasked with interacting with new environments once she reaches them. This usually involves scouting an area and recording simple observations to your jett’s “findings.” Doing this is easy: You just pull out your jett’s scanner to observe an animal or plant and learn more about how they react to different stimuli. An electric eel-like shock serpent will pursue Mei the second her jett takes off, while a frog-like brute will fearfully hop away from any source of light, for example.

Gathering these observations is key to Jett’s story–Mei is a scout after all–but they also bring the game to a sudden halt. Turning off your jett’s propulsion to slowly hover around a space and scan everything in the vicinity isn’t very fun. Like flying, scanning is a mechanically simple process. But unlike flying–which encourages you to improve and become a better pilot–scanning is simple to the point of being boring. You point your ship at what you want to scan and press a single button to gather data. You don’t even need to figure out what in the environment is important enough to scan–pull out your scanner and the game will immediately highlight what around you can be interacted with. There’s no skill involved in the process, so there’s no feeling of success when you discover something new.

The game will occasionally test your knowledge of the information you glean in the form of small puzzles, but these tests are also unrewarding as your copilot or another member of your scouting troupe will immediately gift you the answer before you have a chance to come up with the solution on your own. It might have been cool to figure out that I could use my jett’s engines to attract and lead the shock serpent to an infested plant bed that could be cleared with an electric charge, or that turning on my jett’s headlamps could scare a brute into hopping towards and eating a group of chirping insects that were waking up the creature I was trying to sneak up on. But Jett never gave me the chance–whenever an obstacle presented itself, a waypoint would pinpoint on my map where I had to go in order to find the plant or animal I needed to circumnavigate an obstacle, and then one of my allies would tell me the best method for taking advantage of said plant or animal. There’s no challenge and thus no sense of accomplishment to Jett’s puzzles.

It certainly doesn’t help that Mei’s jett moves at a glacial pace when it’s hovering and not flying. So if a puzzle involves hovering or quieting your engines, you’re also solving said puzzle at an excruciatingly slow pace–you usually get more story for your efforts, but the task is too tedious for the prize to be regularly rewarding.

Throughout all of this, people are usually talking to Mei to convey information–sometimes in relation to what you’re trying to do and sometimes to provide context for the story. The problem with this stems from the fact that developer Superbrothers designed a fictional language for Jett, so even though people are audibly speaking and you can hear their voices and words, it’s all gibberish and you can only understand what’s being said by reading the subtitles. Here’s the thing: Regardless of whether you’re trying to slowly solve a puzzle or quickly fly, maneuvering a vehicle while trying to read subtitles is not easy (which should be obvious; there’s a very clear reason folks in the real world aren’t allowed to read text messages while driving). So often, you’ll find yourself needing to stop doing whatever you’re doing and sit there while waiting for everyone to stop talking, or choose to continue what you’re doing and possibly miss important story details (and sometimes it’s not even a choice–remaining still while something is chasing you isn’t a great strategy for survival). And languishing in your jett isn’t very fun, even if you’re learning story details while doing so–moving through the world at top speed is when the game excels.

You also get more story when Mei leaves the cockpit–the game sees her occasionally leave her jett to walk around a makeshift campsite or her squad’s main base. In both instances, you have the option of talking with other characters, learning more about the mission at hand, how people are feeling, and what might be in store. In these moments, Jett tells a story about a group of explorers desperate to carve out a foothold on an alien world. As you work the plan, you come to better understand what that plan actually is and why Mei’s presence in the scouting party is so important. The information is intelligently imparted to the player–no one is explaining concepts or plans to Mei that she doesn’t already know or understand. Instead, hints to bits and pieces of Mei’s culture and her society’s plan for the far shore are sprinkled amidst conversations. The game rewards you for paying attention, finding details about the plan and Mei’s role in it via how people talk about it.

Mei is uncomfortably removed from the narrative though. Her role as a person of faith is incredibly relevant to what transpires over the course of Jett, and yet she’s also the only character in the game to almost never speak, so you never get a strong sense of who she is, what she wants, and how she feels about what’s happening to her and her comrades. Her entire characterization is that everyone is happy that she’s there and that she’s proven to be perhaps the most skilled pilot among the group.

As a result, Jett’s final moments fall a bit flat. Those around Mei begin to question their society’s role in this new world they’re preparing to inhabit–should they carve away at an untouched piece of nature to make a home for themselves or endeavor to remain near the bottom of the food chain and try to never cause harm to any plant or animal? The game starts asking interesting questions about second chances and what it means for humans to live alongside nature, but apart from one moment, Mei doesn’t get a chance to express how she feels. And so her story is left in an unfulfilling place, with several ideas raised around her that she seemingly has no conclusions for. A plan was made and she worked that plan–heck, she saved that plan. And though I finished Jett realizing why others asked her to join the mission and be a part of that plan, I’m still not sure what her motivations were for joining the mission and why she chose to fight so hard to ensure it would succeed.

Jett: The Far Shore is at its best when you’re speeding through the air and provided with the agency to figure out how to reach your destination, not slowly hovering around a space and having someone hold your hand through every step of a puzzle. Regular occurrences of the latter drag down the whole experience, and the overall narrative–though intriguingly set-up–ultimately ends in an unfulfilling way, with protagonist Mei feeling too detached from the story and the themes it’s trying to explore.