Oxenfree 2: Lost Signals Doesn’t Seem To Radically Evolve Upon Its Predecessor, But Its Story Looks Promising 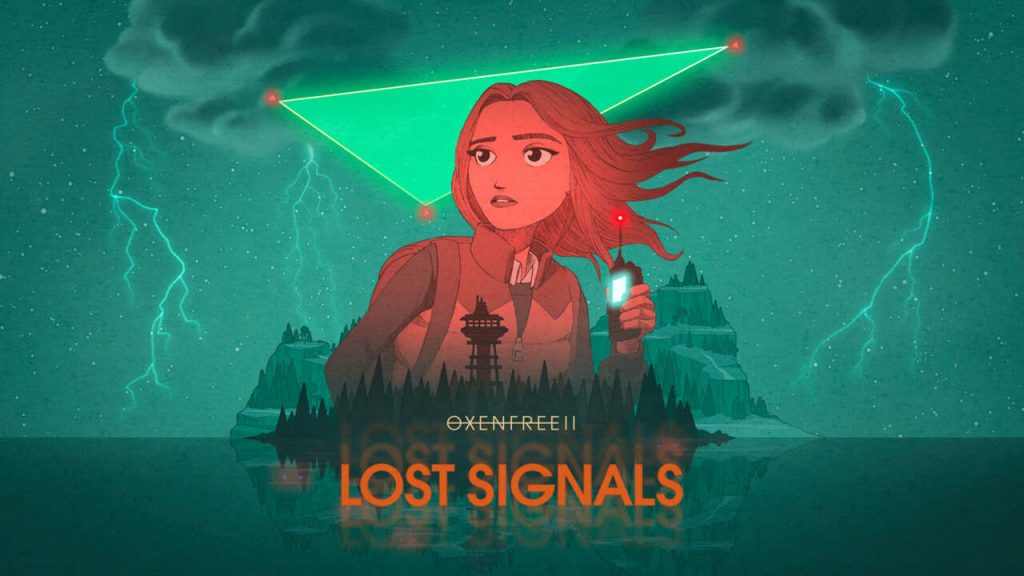 Oxenfree II: Lost Signals continues building upon the world of developer Night School Studio’s debut game, Oxenfree. At an hour-long preview event for Oxenfree II, I got to see how the game plays, and my initial thoughts are that it looks a whole lot like the first. Oxenfree II doesn’t seem to radically evolve upon the core formula Night School used for games like Oxenfree and Afterparty. If you want more of the first game, it looks like that’s what you’re going to get.

Without actually going hands-on with the game, I can’t tell if that causes Oxenfree II to feel a bit same-y in comparison to what Night School has released before. It looks like it could–just as in Oxenfree, in Oxenfree II, you’re walking around and solving fairly elementary environmental puzzles while taking care to skillfully navigate through conversations. When deciding how a conversation will go, determining what to say is just as important as figuring out when to say it, as you can sometimes get different responses depending on whether you interrupt someone or wait to speak.

Want us to remember this setting for all your devices?

Please use a html5 video capable browser to watch videos.

This video has an invalid file format.

Please enter your date of birth to view this video

By clicking ‘enter’, you agree to GameSpot’s

With the gameplay looking so similar, seemingly the biggest difference between Oxenfree II and Oxenfree is their respective stories, most noticeably how their protagonists are in two very different stages of life. While Oxenfree’s Alex is a 17-year-old high school girl struggling to overcome her immediate past, Oxenfree II’s Riley is a 32-year-old woman trying to prepare for the hardships of her immediate future. And it’s in this difference where Oxenfree II most intrigues me–I want to see how a “coming of age” story centered around adult characters plays out.

Taking place five years after the events of Oxenfree, Oxenfree II sees you play as Riley Poverly, who returns to her hometown of Camena to take an entry-level job as an environmental researcher. Riley is responsible for planting radio transmitters around Camena to help a research group gather data about the unnatural electromagnetic waves that have been interfering with equipment around the coastal town. Not everything is as it appears however, and soon Riley finds herself in conflict with Parentage, a mysterious collective that seems to be manipulating the same strange anomaly that Alex first discovered in Oxenfree.

“[Riley] is having her coming of age moment at 32, and she’s on the precipice of a bunch of things that are going to change her life forever,” Night School Studio co-founder and studio director Sean Krankel told me.

“I feel like everyone can relate to the very basic bare bones version of the themes that are in Oxenfree II and 1,” Night School Studio co-founder and creative director Adam Hines added. “In both games, every character is going through some sort of [life experience] where life is throwing them something and they have to make a choice of what they want to do with that. With Oxenfree 1, that cast is very small–they were all graduating high school. But in Oxenfree II, we have a much wider range of ages and life experiences and jobs and what they want to do and what they are unable to do, and filter all that through this big crazy event in one night.”

He continued: “And all of their particular issues bounce off each other within the buckets of a couple of different themes. Some of the themes are important to playing the game and experiencing as they come out, but a big one is just the idea that you are an adult. Now that you have made some choices, you’ve started on your path, and you’re maybe now deciding whether this is the right or wrong path that you set out on–with its time loops and time tears, the game really encourages both the players and the characters to really take stock and look back and forth [at your options] and just see where you want to go. So yes, this is another ‘coming of age’ game. The characters are older–they’re fully adult–but they’re still trying to define who they are, just as we all are every day.”

Riley is portrayed by actor Elizabeth Saydah–who, within the span of minutes, made me fall deeply in love with the general characterization for Riley. She provides Riley with a soft maturity that is oftentimes undercut by jovial sarcasm. In the gameplay I saw, Riley tried to give off carefree vibes–almost like she wanted people to view her as aloof and still very cool–but small snippets of dialogue betray she’s deeply knowledgeable about the world and possesses a caring disposition towards others. Saydah has previously worked with Night School on its last released game, Next Stop Nowhere, as the voice of Serra, though you may also know her as The Evil Within 2‘s Myra Castellanos.

“In much the same way that Alex in [Oxenfree] is Alex and there isn’t like a massive Mass Effect-style range to her character–like, ‘Will you kick someone out of a building or give them a kiss?’–there’s a narrower range for Riley,” Hines said. “It’s important to us that [Riley] feels like a fully-realized character that has a past that you can relate to and has surprising parts to her–even her future might surprise the people that are picking and choosing what she’s saying.”

He continued: “We hope people take her history and the knowledge of how characters have known her from her past and talk about her to then look at those moments as signposts to say, ‘Okay, this is who Riley is–who do I want her to be by the end of the game?’ Players can take Riley on that journey and say, ‘Okay, she started out here, but I think she made some wrong choices to end up who she is. So I’m going to try and turn her into this instead, next time.'”

And to that end, Oxenfree II is being designed with replayability in mind, a departure from the intended structure for the original Oxenfree. It doesn’t look like players will likely find much incentive in replaying puzzles they’ve already solved (they seem to be very simple), but the story for Oxenfree II can play out in different ways and the setting for the game is large enough that players won’t actually be able to do everything in a single playthrough. Much like being an adult in real life, you’ll have to prioritize between Riley’s job, her relationships with other people (I asked, and sadly there’s no romance options for Riley), and her personal curiosities and passions.

“In Oxenfree II, the map is about twice the size of the first one,” Krankel said. “And once the first act concludes, things start to open up quite a bit in terms of where you can go and how you make your way through the story. So you might be heading up on the west side of the map to place a transmitter, and because of that, there’s other things happening in the middle or the east side of the map that are also happening that you’re missing. For Oxenfree II, we really wanted to lean into this idea that just because you’re the hero of the game, it doesn’t mean that the world won’t move on without you–you’re going to miss a lot of stuff. There’s no possible way to make it through one playthrough and see everything or meet everybody–the game is designed to ensure that your choices forcibly cut off other choices.”

I only saw a snippet of Oxenfree II during the preview event, so I can’t comment on just how much content you’re missing out on with each playthrough, nor whether replaying the game to get more of that story is worth it. But with Oxenfree II scheduled to launch sometime in early 2022, it’s possible we won’t have to wait too much longer to find out.

Oxenfree II: Lost Signals is set to release for PS5, PS4, Switch, and PC. Playing on PS5 may be the way to go–though Krankel said that Night School and Sony haven’t finalized the feature set yet, Oxenfree II will incorporate the DualSense in some capacity. “We’ve been thinking about how using the radio on that controller could be cool, and maybe how to include an idea for the color bar,” he said. “I don’t know if there’s a lot that can be done, so we haven’t finalized it yet, but yes, [Oxenfree II] will definitely take some of those things.”