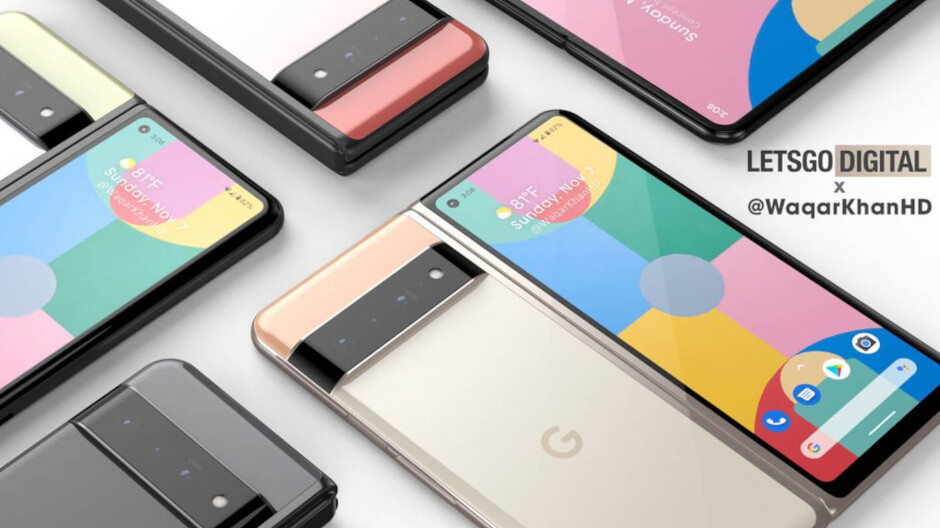 Google has already started promoting the Pixel 6 series with billboards and videos. But there is another Pixel model that Google is rumored to release this year called the

Pixel Fold. As you might have assumed, this is a foldable device that folds inwards.

When fully open, a Samsung sourced 7.6-inch Ultra Thin Glass display is outed. The screen is expected to feature a 120Hz refresh rate with an LTPO backplane allowing the refresh rate to be variable based on the content being viewed. Mobile games, scrolling, transitions on the display would update 120 times per second while static content, such as emails and texts, would refresh at a slower rate.
LetsGo Digital teamed up with graphic designer Waqar Khan to create renders of the Pixel Fold based on existing rumors about the device which bears a resemblance to the Samsung Galaxy Z Fold 3. It will feature an external display with a punch-hole selfie camera. Among the latest rumored specs, the foldable is expected to be powered by Google’s new homegrown Tensor SoC.

While the cameras on the back look similar to the configuration seen on renders of the Pixel 6 series, it isn’t clear at the moment exactly what the array consists of. The Pixel Fold might be equipped with an under-display camera. Back in May, Google was awarded a patent for a camera located under the screen. While we’ve been calling the device the Pixel Fold thanks to its resemblance to the Galaxy Fold 3, there is no guarantee that Google will give this name to a foldable Pixel.

While the codename being used for the foldable is “Passport,” Google is reportedly working on another foldable Pixel model with the codename “Jumbojack.” Regardless, we would expect the company to release only one model before the end of this year and if there is a second variant, it might not see the light of day until 2022. This is a mystery that we might be able to get to the bottom of by next year.

Render of the Google Pixel Fold

LetsGo Digital also reports about a patent awarded to Google on September 23rd by the U.S. Patent and Trademark Office (USPTO). The title of the patent is “Multi-axis soft hinge mechanism and foldable device having same” and it is designed to be used with an inward folding phone. With this hinge, when the phone is folded, only a small seam is created.

The patent adds that the hinge mechanism prevents damage to the display caused by “excessive compression and/or tension exerted on components of the foldable display portion in response to folding and unfolding of the foldable device.”

So it sounds as though this new hinge will not only help to protect the screen from damage caused by the opening and closing of the device, but helps the display curve when the phone is closed, and stay flat when the handset is open.

And yet another render of the foldable Pixel Fold

The Pixel Fold could be released with Android 12.1 pre-installed. This build of Android is expected to include useful interface tools designed to work with foldable phones and tablets. This would include a taskbar showing the icons of frequently used and recently used apps and allow the user to quickly select two apps to be used with a split-screen mode. The taskbar would show five icons at one time.