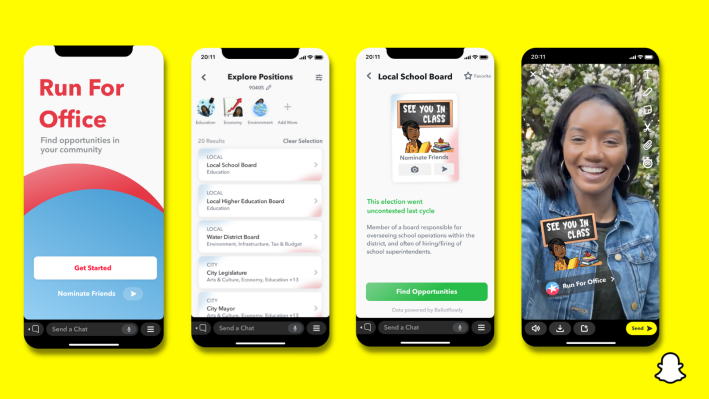 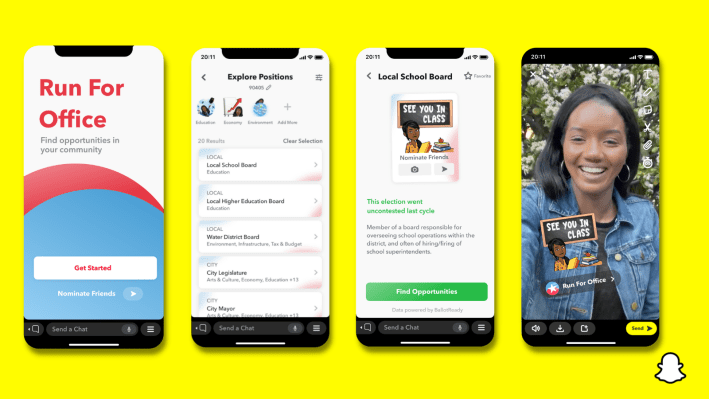 Snapchat is rolling out a new ‘Run for Office’ in-app tool to encourage young adults to run for local office. The company says the new Run for Office tool is designed to help younger users engage with democracy in an easy way. The goal of the tool is to tackle common barriers that young people face when determining whether they want to get involved in local politics.

“Powered with information from BallotReady, this simple tool will help Snapchatters explore hundreds of opportunities to run for local office based on the issues they care most about — from City Neighborhood Board and Township Council to School Board and State Representative,” the company said in a statement.

The tool includes a centralized portal that curates over 75,000 upcoming elections on the federal, state and local levels that users may be eligible to take part in. Users will also be asked to identify issues that they are passionate about so that the tool can surface roles that they may be interested in. The new tool also provides access to candidate recruitment organizations and training programs such as Emerge America, Women’s Public Leadership Network, LGBTQ Victory, Vote Run Lead and more.

Snapchat users will also be able to nominate their friends to run for office through the tool. Users will be able to share stickers through the tool to start campaigning on Snapchat with their friends. Further, the tool includes a personalized campaign hub that shows users the steps they need to take to get on the ballot. The hub also provides information about filing deadlines and signature requirements.

“We know this next generation is the most diverse, yet currently only 6 percent of state legislators are under the age of 35. We hope our Run for Office initiative will help shape a more equitable, and reflective, democracy that includes all Americans, including young people,” the company said.

Snap says its app reaches 90 percent of 13-24 year olds in the U.S. and that this gives it an opportunity to encourage young users to become engaged citizens. Any Snapchat user in the U.S. can now access Run for Office by swiping down on the app’s camera screen or by searching for the tool within Snapchat.

The new tool isn’t the first time Snapchat has tried to get users involved in politics. During the U.S. election last year, the company launched a voter-focused initiative aimed at getting users registered to vote. The initiative featured a handful of celebrities including Snoop Dogg, Arnold Schwarzenegger and former President Barack Obama. Snapchat also rolled out a tool that prompted users to make a plan to vote with friends and request a mail-in ballot.