Why Squid Game is as Brilliantly Subversive as Black Mirror 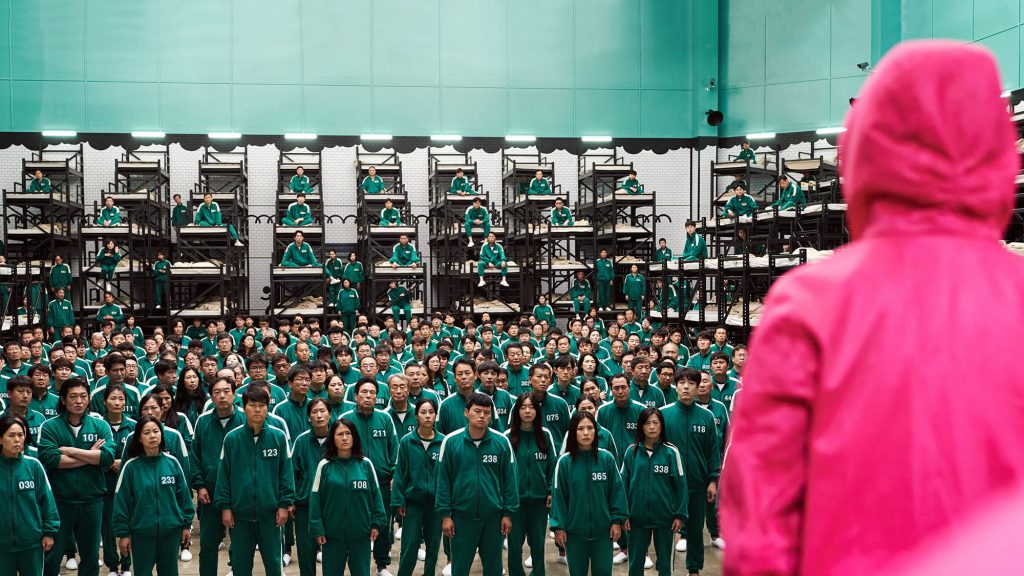 Squid Game, the latest massively popular series on Netflix, seemingly came out of nowhere. The Korean series, offered in North America with English dubbing and the option for subtitles or closed captioning, is on track to become the streaming service’s most popular non-English-language show to date — potentially even Netflix’s biggest show, period.

Like Battle Royale, Hunger Games, and recent Japanese series Alice in Borderland, Squid Game follows a group of people forced to participate in a series of life-or-death games. And although it has a lot in common with those projects, it also shares plenty of thematic elements with the equally shocking and mind-bending psychological anthology series Black Mirror, which explored class inequality, capitalism run amuck, and the power that comes with privilege, among other complicated subjects.

In fact, the two series — Squid Game and Black Mirror — both offer some of the most potent examinations of these topics you’ll find on TV.

The similarities between Squid Game and Battle Royale or Alice in Borderland are obvious, but the comparison to Black Mirror is more subtle. At the heart of both shows, though, is thought-provoking commentary on social issues.

Black Mirror focuses its lens on technology, our reliance on it, and the devastating effects of taking our obsessions to terrifying new heights (or, some might argue, even continuing on their current paths). Squid Game, meanwhile, shifts the commentary to an examination of economic inequality. And unlike in Battle Royale or Alice in Borderland, the people who participate in the thoroughly disturbing and cruel human torture games in Squid Game are technically — and shockingly — doing so of their own freewill.

For the characters risking their lives in Squid Game, they choose to play the deadly games because the alternative is to return to a world where they are disregarded, face seemingly insurmountable troubles at every turn, and have amassed more debt than they could possibly pay off in their lifetimes.

In Black Mirror, however, what occurs is often a by-product of societal trends and cultural shifts, even if characters choose to adopt and rely on the technologies and systems that lead them down a path with devastating consequences. In the episode “Be Right Back,” for example, a woman chooses to use artificial intelligence (A.I.) to “bring back” her dead boyfriend, even though she knows deep down it isn’t really him and will take a deep, emotional toll on her.

Both series put their focus on characters who choose a dangerous path because they feel like they have no other option, whether due to economics or technology.

Slaves to the system

In both Squid Game and Black Mirror, the featured characters are often products of societal inequality, punished for being victims of circumstance, and forced to resort to desperate measures for the purpose of self-preservation.

While the Squid Game organizers prey on vulnerable individuals, viewing them as dispensable, Black Mirror presents a world in which humans have effectively become blind followers to whatever dystopian future is presented – mere cogs in the wheel and followers of whatever technology god they have chosen to bow down to. The very systems that surround you and support those around you are used against you in both shows.

Helicopter parents can block their children from viewing questionable imagery in real life in the Black Mirror episode “Arkangel,” while the episode “USS Callister” explores how those who are ostracized can enter a virtual game and take revenge on those who have ignored them in the real world. The “players” in Black Mirror aren’t playing a terrifying game of Red Light, Green Light like the ones in Squid Game, but they’re also slaves to social norms (“15 Million Merits,” “Nosedive”), hurtful social media comments (“Hated in the Nation”), or even their own crimes (“White Bear”).

Another way the two shows fall in line with one another is in their shared focus on patriarchal, capitalist societies and the way those in power can control, manipulate, and use others for their own personal gain, and even entertainment.

The choices players make in Squid Game also point, in large part, to themes of power, greed, and wealth disparity. People resigned to a life of crime and violence in the real world are encouraged to use their power and confidence to weed out the “weak ones” in the games. Those who lie, manipulate, cheat, and steal in real life concoct plans to leverage these “skills” in the various games and deliberately take out their opponents.

Similarly, one of the most striking episodes of Black Mirror, “Men Against Fire,” features a highly skilled soldier equipped with special glasses to target and kill feral mutant enemies. He eventually discovers — much to his horror — that the goggles actually had him killing poor, defenseless immigrants for the government without any remorse. In a way, he’s held hostage in his own, personal Squid Game for the benefit of those in power.

It’s no wonder fans have dubbed Squid Game a mix of “Battle Royale meets Black Mirror.” At its heart, it’s a show about people who are down on their luck and desperate, with nothing to lose — but there’s far more brewing beneath the surface. What got them to that point is a society that favors the strong and disregards the weak. And like each episode of Black Mirror, Squid Game keeps you guessing right up to the end how things will turn out.

Sure, Squid Game is more violent than every episode of Black Mirror combined, but it’s just as disturbing, subversive, and thought-provoking, too. And maybe most importantly, both series have something to say about the human condition and the societal norms that can — and do — have dangerous, life-altering, and even life-ending consequences.

All episodes of Squid Game are currently available on Netflix.