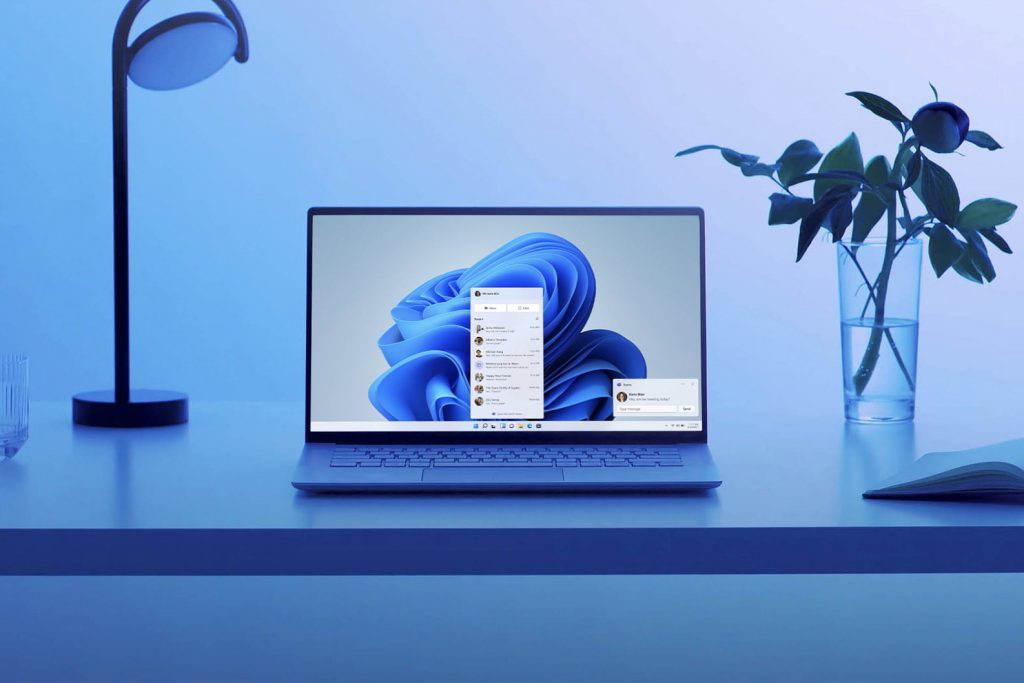 After several months of beta testing, Windows 11 has officially arrived. It is now officially available on new PCs and will begin a very slow rollout over the coming months.

There’s a lot that’s new in Windows 11, from fancy visuals to productivity features, and even enhancements to gaming. Yet, there are also compatibility changes, which have caused a fair share of controversy.

Here’s everything about Windows 11, all in one convenient guide.

Windows 11 releases on October 5, 2021. That doesn’t mean, however, that your PC will be able to update anywhere close to day one.

October 5 is the day you’ll be able to buy new laptops and PCs that come preloaded with Windows 11. These include the new Surface Laptop Studio, Surface Pro 8, new laptops from Acer, and many more.

Microsoft has not yet indicated whether or not retail versions of the operating system will be available starting October 5, for manually upgrading from Windows 10 to Windows 11.

When will the Windows 11 update roll out?

Microsoft has officially stated that the Windows 11 rollout begins on October 5, but has not indicated which devices (or how many) will be receiving the updae on the first day. Windows 11 will be rolling out in a phased approach, focusing first on Surface devices and newer PCs.

Microsoft says it hopes to have all PCs on Windows 11 by mid-2022. It’s using intelligence models like hardware eligibility, reliability metrics, age of the device, and other factors to determine when PCs will get Windows 11, with older PCs getting the update later.

Yes, that means you might not see the update roll through for up to eight months.

Just as you usually check for security or driver updates, you can head to Settings > Windows Update > Check for updates to see if Windows 11 is ready for you. There will be messaging on the Windows Update page to let you know if your PC is compatible with Windows 11. If you’re not seeing the messaging, you can try using Microsoft’s Windows 11 PC Health Check tool to cross-check your PC for compatibility.

Windows Update is the best way to get Windows 11, but Microsoft is rolling out Windows 11 via Installation Assistant, too. This tool is for supported hardware and will allow you to upgrade to the release version of Windows 11 without depending on Windows Update. Keep in mind, though, that this could mean that you’ll end up experiencing bugs, as it hasn’t verified that your system is tested for Windows 11.

Meanwhile, if your system is incompatible and you don’t meet the requirements, then you’ll have to use the Media Creation Tool to install Windows 11. But this comes with the risk of not getting critical security updates.

If all else fails, and you really want Windows 11 and you’re not seeing it on your PC via Windows Update, you can install Windows 11 by enrolling in the beta channel of the Windows Insider program. Just keep in mind that you might experience bugs, compared to if you wait it out.

What are the Windows 11 requirements?

Unlike Windows 10, Windows 11 has some strict requirements on its website. The requirements include a PC with a TPM (Trusted Platform Module) 2.0 chip: Either Intel 8th generation or AMD Ryzen 2000 or newer processor.

Your PC also needs to have 4GB of RAM and 64GB of storage or more. The display, meanwhile, is required to be at least 720 pixels and larger than 9 inches diagonally with at least 8 bits per color channel. As for graphics, it needs to be compatible with DirectX12 with the latest WDDM 2.0 driver.

Your PC will also need to support secure boot. You can cross-check if your PC will work with Windows 11 by downloading the PC Health Check app directly from Microsoft’s Windows 11 product page.

These requirements should not be an issue if you’ve purchased a new PC within the last five years. However, some people who have custom-made laptops or desktops might not be able to upgrade to Windows 11 since system motherboards do not always have TPM 2.0 built-in.

If that’s you, and your PC doesn’t meet the Windows 11 requirements, then Microsoft will grant you an exception. You can use the Windows 11 Media Creation tool to force install Windows 11. But, even if you do, you run the risk of running Windows in an unsupported state. You also won’t be getting critical security updates or driver updates, so you might want to stay on Windows 10.

How does Windows 11 look?

The biggest change in Windows 11 is with the visuals. Windows 11 brings more rounded corners, as well as a new look for the Start Menu and Taskbar. There’s also a new Quick Settings area. Microsoft says that all these changes are aimed at being “fresh, clean, and beautiful, for a sense of calm and ease.”

The Start Menu has been moved to the middle of the screen. Live Tiles have been removed and icons are static and smaller to only represent the name of the app itself. You’ll also see a search bar up top, as well as a list of your most recent files on the bottom, to help you get working more quickly.

As for the Taskbar, it’s also now in the middle of the screen. This is similar to MacOS, and Chrome OS. Microsoft intends for this change to help save time as your icons are now always in your line of sight in the middle of your display.

Finally, with Quick Settings, you’ll see the settings that matter most for you in a single hub. This includes Wi-Fi, battery, and sound. There are even sliders for sound and brightness. Compared to Windows 10, this helps save space in the Taskbar so that you’re not bombarded with icons. Everything you need is upfront.

Compared to Windows 10, edges are less squared and flat in Windows 11. Things are more rounded and lively, and there are lots of glasslike aero and see-through effects where your wallpaper might show up behind what you’re working on. You will notice these in context menus, as well as the File Explorer.

What are the productivity features in Windows 11?

Along with the visual updates, Windows 11 also brings some productivity-first features. This includes Snap Layouts, Snap Groups, and Desktops. There’s also an integration with Microsoft Teams, a new Microsoft Store, and a new Widgets feature.

Snap Layouts and Snap Groups let you stay in your workflow. You can use the features to ensure you get the most work done. Hover your mouse over the maximize button and group any of your open windows together. That group you create then gets saved to the Taskbar in a “Snap Group,” so you can get back to them very easily with a single click.

Note that Microsoft also tweaked the docking system in Windows 11. Now when you unplug, then plug your PC into a monitor, Windows will remember how you left it. You’ll no longer need to move your windows around.

With Desktops, Microsoft is allowing you to change the wallpaper on select virtual desktops to better distinguish between them. You even can drag your virtual desktops around in the preview section.

As for Teams and Widgets, there’s now a “Chat” app in the Taskbar. This is the personal version of Teams, letting you keep in touch with your family and friends without downloading an extra app. Widgets, meanwhile, occupy a separate space in Windows 11 where you can peek at the weather, news, traffic, and other information at quick glance.

Finally, the new Microsoft Store has been redesigned from the bottom up. The new store makes it easier to download the content you love and update apps you already have. Microsoft supports three types of apps in the store: UWP apps, PWA apps, and Win32 apps. Heavy hitters include PWAs from Instagram and Twitter, Win32 apps like Opera and Adobe Reader, and UWP apps like Microsoft Journal.

What are the tablet features in Windows 11?

If you’re using Windows 11 on a 2-in-1 device like the Surface Pro 8 or Surface Laptop Studio, then Windows 11 will be perfect for you. There are a lot of new Windows 11 features catered to just touch experiences. These include a new touch keyboard experience and new inking features.

Thanks to the improved tablet mode in Windows 11, when you detach your keyboard, or when you flip your device over, Windows will adapt. Icons in the taskbar will space out, and you’ll have more room to touch. Microsoft also worked on the touch keyboard to make it similar to Swiftkey on iOS and Android. As an example, you can use the spacebar trackpad to swipe between words or change the keyboard theme.

If you’re using a stylus or pen, Windows will show you a menu with available inking apps. On the Surface Pro 8 and Surface Laptop Studio, Windows 11 even supports haptics, so that when you slide the Surface Slim Pen 2 on the screen, it will replicate the pen-to-paper feel.

What are the gaming updates in Windows 11?

If you’re a gamer downloading Windows 11, then we have good news. There are a lot of great features for you. Microsoft is rolling out support for rectX12 Ultimate, DirectStorage, and Auto HDR with the new operating system. This should make your games perform better, and also look good on high-end hardware. Microsoft even bundles the new Xbox app on Windows 11, which, when paired with Xbox Game Pass Subscription, can get you access to more than 100 high-quality PC games.

Should you upgrade from Windows 10?

We talk about the differences between Windows 10 and Windows 11 in our separate post, but, for most people, it might be worth upgrading to Windows 11 when it becomes available. Windows 11 is the newest operating system from Microsoft, so it will get the latest and greatest abilities — like support for running Android apps (which was not ready for release.)

Microsoft will also fade out Windows 10 in 2025. So, by adopting Windows 11 sooner rather than later, you’ll be up to date with the latest.