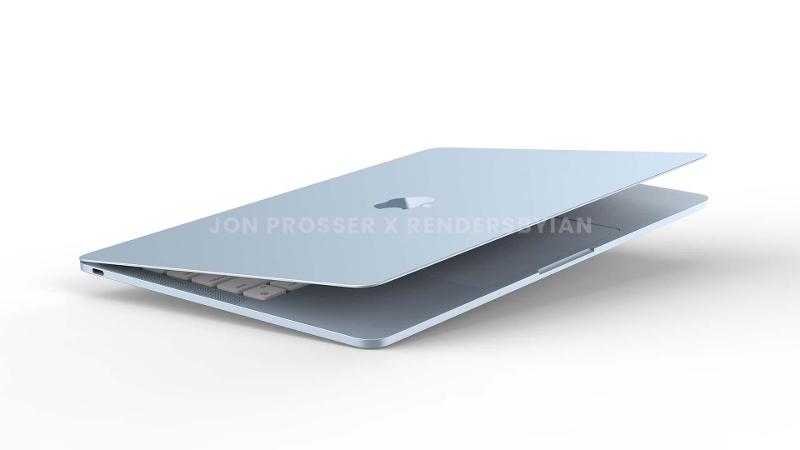 We were impressed with the MacBook Air Apple introduced in March 2020, and then Apple blew that out of the water with the M1 MacBook Air in November 2020. With two MacBook Air launches in 2020 you’d be forgiven in thinking that there would be no big MacBook Air news on the horizon, but apparently there is a new look MacBook Air in the works and Apple is planing a colourful redesign to boot.

According to Bloomberg’s Mark Gurman (who seems to have access to some pretty good sources) Apple is developing a “thinner and lighter version of the MacBook Air“. This new MacBook Air will apparently no longer have the tapered design it is famous for.

Plus a leak from Jon Prosser suggests that this new MacBook Air will come in a variety of colours – just like the 24in iMac. Prosser has managed to get some images mocked up of what that might look like. More on the new design of the MacBook Air below.

Also analyst Ming-Chi Kuo, in August 2021, claimed Apple intends to introduce a number of new colour choices for the MacBook Air in 2022.

In this article we’ll investigate what’s in store for the new MacBook Air, we’ll evaluate whether a new MacBook Air will launch in 2021 or 2022, and we’ll take a look at the anticipated features and improvements.

It’s worth noting that these rumours could point to a new MacBook Air or the reincarnation of the MacBook. Prosser notes that the information he has received from his source suggests that this is not a MacBook Pro.

If you are hoping to see the new MacBook Air before the end of 2021 prepare to be disappointed. Back in January 2021 Mark Gurman wrote in Bloomberg that the new MacBook Air could arrive in the second half of 2021, but he allowed that the launch could be pushed back to 2022.

Similarly, Jon Prosser’s source has indicated that the new MacBook Air could arrive at the end of 2021 at the absolute earliest.

Now that we are nearing the end of 2021 it is looking very unlikely that we will see a new MacBook Air until 2022. When in 2022 will we see the new MacBook Air?

Twitter account Dylandkt wrote in July 2021 that he believes that a new MacBook Air with M2 chip will arrive in the first half of 2022.

Just wanted to share some details on when to expect the next generation M2 (not the M1X which is reserved for the Pro Mac devices). This processor is on track to release in the first half of 2022 alongside the upcoming colorful Macbook (Air).

Analyst Ming-Chi Kuo has been saying for some time that Apple will launch a new, more “affordable” ‌MacBook Air‌ in 2022. He reiterated this 2022 launch prediction in a note to investors published back in March 2021. At that time he suggested that Apple will launch a new model of MacBook Air with mini-LED in 2022 and that it would be the first entry-level Mac to feature mini-LED display technology.

We had thought that a March 2022 launch would be likely because it would correspond to the early-2020 MacBook Air update. However, if Kuo is correct, and production isn’t likely to begin until the summer, we could be waiting until June or even October 2022 for the new MacBook Air.

Whether the launch is pushed back even more could depend on what happens with regards to the global chip shortages that are affecting Apple and other manufacturers.

If you don’t want to wait to buy a new MacBook Air you can find the best deals right now here: Best MacBook Air deals.

According to the Bloomberg report this new laptop will be positioned as a higher-end version of the current MacBook Air with the current models remaining on sale.

The current MacBook Air is priced as follows.

Should the new model come in at the top of the range we would expect Apple to drop the price of the current models, which could mean that the entry-level MacBook Air sees a price drop to £899/$899 while the new model, with its new design, comes in at £1,349/$1,349.

The lower starting price complements Kuo’s suggestion that the MacBook Air will see a price drop. It’s just not clear if the price drop will be on an older model, rather than an update.

Jon Prosser’s source – who just happens to be the same person who revealed that Apple was going to launch iMacs in different colours – has indicated that new MacBook Air in a variety of colours, and with an all new design is coming. Read: A colourful MacBook launch is coming.

Prosser had RendersbyIan create images based on the information his source provided about the new MacBook Air. He claims that they had quite a lot of information to work with.

Prosser was able to confirm that the bezels and keys on the keyboard are white, for example.

Prosser also revealed that the tapered look that the MacBook Air is famed for will be no more. Instead it will have a flat design and the case will be only fractionally thicker than a USB-C socket, of which Prosser indicates there are two.

As for colours, Prosser claims that there will be blue and green options and he suggests that they will be “very close, if not identical” to the 24in iMac.

Read more about the information used by Prosser to create the images here: First look at colourful MacBook Air.

It’s not only Prosser who has information about the new MacBook Air. Both analyst Ming-Chi Kuo and Bloomberg’s Mark Gurman expect the company to launch colourful MacBook Air models in 2022.

In a Bloomberg article from January 2021 Gurman describes how the upcoming MacBook Air will be thinner and lighter while maintaining the current 13in screen size. In order to achieve this Apple will reduce the size of the bezels around the screen.

The closest we can get to a prediction of how much smaller the MacBook Air could be while maintaining the same screen size is to look at the 16in MacBook Pro compared to the 15in model. When Apple updated the design of its larger MacBook Pro it increased the size of the screen partly by reducing the bezel size and partly by increasing the size of the Mac itself.

But this time the plan appears to be to keep the screen size the same while shaving a little off the edges. On that basis we’d expect Apple to shave off at least a centimetre from the over all dimensions. So we could be looking at around 29.5cm x 20cm.

There’s once thing that could stop the laptop getting any smaller. The optimum keyboard size. Apple’s Magic Keyboard is 27.9cm wide so it’s unlikely that the new MacBook Air would be any smaller than that – reducing the size further would mean that the keys were too close together.

Other clues come from the past: back in 2016 Apple discontinued the 11in MacBook Air. You might be thinking that would have been tiny, but the measurements were 30cm x 19.2cm.

According to the Bloomberg report mentioned above, Apple actually considered making a 15in version of the MacBook Air, but scrapped that idea.

Analyst Ming-Chi Kuo believes that the first MacBook Air with a mini-LED screen will launch in the middle of 2022. He outlined his expectations for this in notes to investors in August and July.

Mini-LED is a screen backlighting tech that provides better colour reproduction, blacker blacks, higher contrast and greater dynamic range. The technology is already used for the iPad Pro and is expected to come to the MacBook Pro in 2021.

Apple is expected to move much of its Mac (and iPad) range to mini-LED displays, although there have been delays due to supply constraints. Mini-LED displays bring the following improvements:

If this new MacBook Air is to be thinner and lighter than currently what does this mean for the components on the inside?

Right now the Air can be limited by the fact that it lacks space for cooling and heat dissipation – the current model doesn’t even have a fan. Without a means of cooling itself Apple has to stop the MacBook Air from getting too hot – which generally means slowing it down when the going gets tough.

With that in mind we shouldn’t expect the 2021 MacBook Air to be much more powerful than it is currently, and certainly not as powerful as the MacBook Pro, but we can expect some improvements.

As mentioned above, Twitter account Dylandkt believes that a new MacBook Air with M2 chip will arrive in 2022. He indicates that the M1X will be reserved for pro devices. We therefore don’t expect to see the new MacBook Air until after the M1X equipped MacBook Pro launches.

Just wanted to share some details on when to expect the next generation M2 (not the M1X which is reserved for the Pro Mac devices). This processor is on track to release in the first half of 2022 alongside the upcoming colorful Macbook (Air).

That Bloomberg report we mentioned able suggests that the MagSafe charging port may be returning to the Mac, so we may well see that return to the MacBook Air.

We also sincerely hope that Apple adds a better webcam. The current 720p FaceTime camera is terrible, we’d hope for a HD (1080p) webcam. Even better if it also offers Face ID. Read about Face ID on the Mac?