The Best Lenovo Laptops for 2021 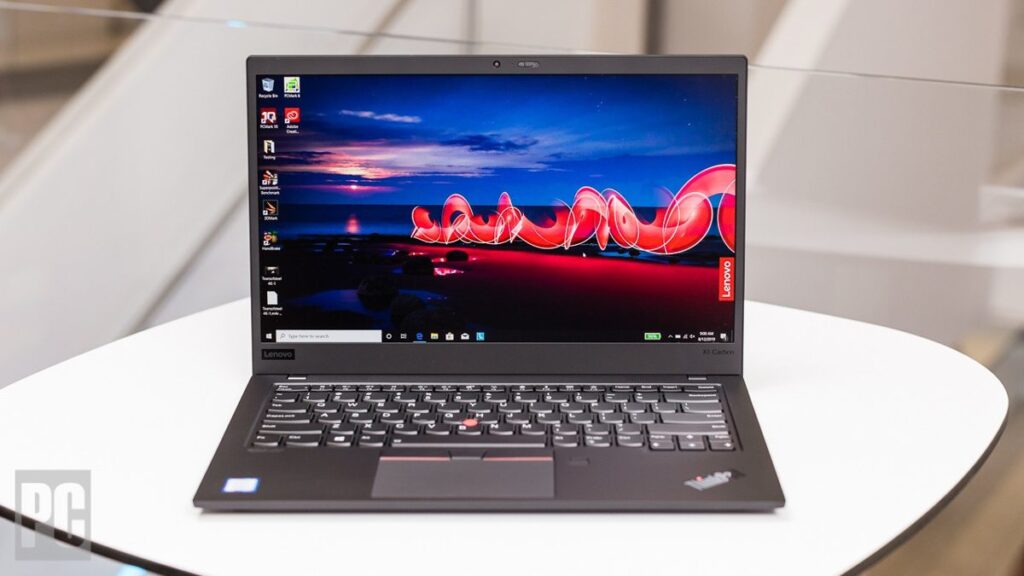 It’s been more than 15 years since IBM stopped making ThinkPad laptops, yet you’re still likely to see them in the halls of industry, virtual or actual. That’s thanks to Lenovo.

The company formerly known as Legend Computers of Beijing, China, still produces the well-regarded laptop line, with its beloved AccuType keyboard. And indeed, a big part of the ThinkPad’s longevity has to do with those rugged, inimitable keyboards. But Lenovo machines nowadays range well beyond the classic black ThinkPad slabs. (For one thing, you can get some of them in silver.)

Rather, year after year, Lenovo continues to innovate with radical designs. Take the rotating-screen Yoga family, which influenced other major PC manufacturers like Dell, HP, and Acer to adopt its basic mechanism in their own 2-in-1 convertible laptop designs. Lenovo’s high-concept devices also include the first foldable-screen PC, a ThinkPad.

Lenovo’s conventional Windows laptops include ThinkPads, ThinkBooks, and IdeaPads. (Gaming machines and 2-in-1 hybrids are another matter; more on them in a bit.)

The Classics: The ThinkPads (and Now the ThinkBooks)

These machines tend to offer more in the way of IT-friendly features for monitoring, management, and business-oriented wired and wireless connectivity. To help position certain models within the larger laptop market, Lenovo divides its ThinkPads into a host of sub-classes indicated by a letter. These include the ultraportable ThinkPad X and top-of-the-line X1 lines, the entry-level ThinkPad L family, and the ThinkPad P mobile workstations. The 14-inch X1 Carbon is the company’s executive flagship, joined in 2021 by the 13-inch X1 Nano, the lightest ThinkPad at 1.99 pounds. 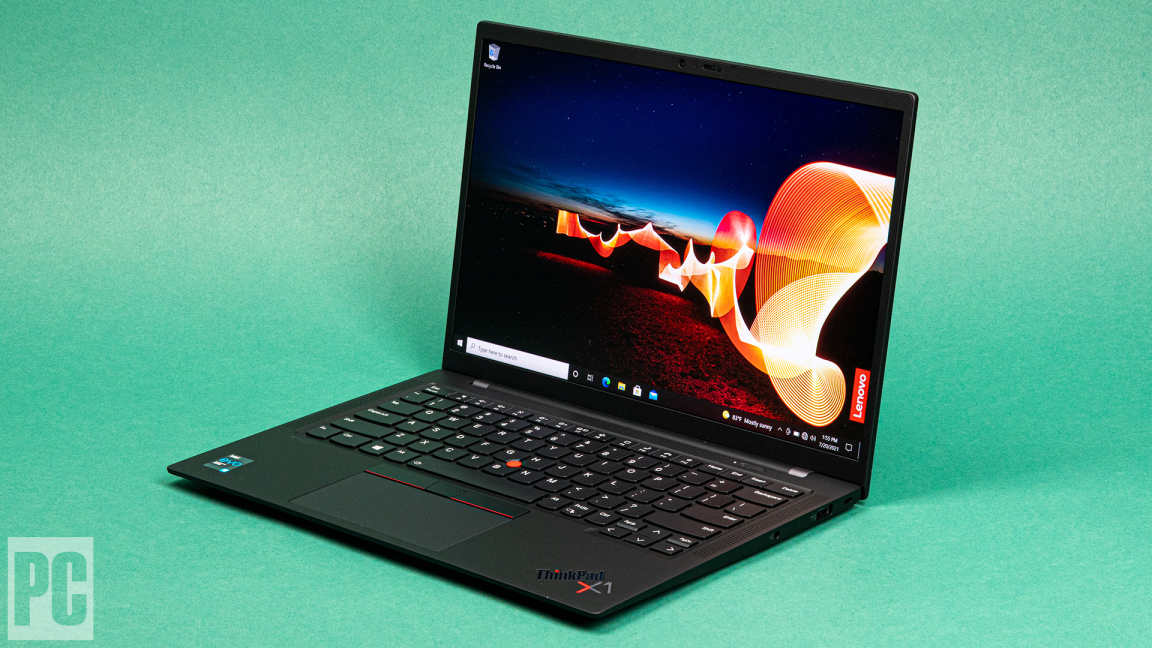 The bread-and-butter ThinkPads, though, are the T series, widely deployed business laptops that deliver a good balance of cost, durability, and feature set, along with the famous ThinkPad keyboard. Current T-series models include 14- and 15.6-inch notebooks, some with an “s” suffix after their model numbers to indicate a slimmer and lighter system. You may also see models with a small “g” at the end (indicating a discrete Nvidia graphics chip) or a “p” for “professional,” an upper-echelon model with better specs.

Beyond L, P, T, and X, Lenovo has also pushed another, newer line: E. The E series is more of a hodgepodge than most, resolutely budget-minded, with CPUs from both Intel and AMD and models in both 14- and 15.6-inch screen sizes. Meanwhile, Lenovo ThinkBooks are a distinct line from ThinkPads. They serve small and medium business (SMB) customers and also lean toward the value end of the spectrum. (See our picks for the best business laptops overall.) The ThinkBook line has grown in 2021, now coming in 13-, 14-, and 15-inch versions in slim and normal-thickness variants.

You’ll need a quick decoder to ThinkPad model numbers, whose logic changes every few years according to the moods of Lenovo’s marketing braintrust. Until recently, the company used three-digit numbers with the first digit signifying screen size: Models that start with “3” have 13.3-inch, “4” have 14-inch, and “5” have 15.6-inch displays. Model numbers ending in “5” are based on AMD processors; “0” at the end indicates Intel. That scheme still holds for some older models still in the line.

More recent models, however, carry a series letter such as E, T, or X plus two digits marking the screen size. So a ThinkPad E15 is a budget-minded model with a 15.6-inch screen, while the ThinkPad T14 is the classic business fleet machine with a 14-inch panel. The premium ThinkPad X1 models don’t indicate a screen size in their model names. ThinkBooks simply use two digits in the name, for the screen size, with an “s” at the end if it’s a slim variety.

The IdeaPad Line: The Consumer Clamshells

Lenovo IdeaPads, on the other hand, are aimed mainly at consumers, though design-forward business users and entrepreneurs may gravitate toward using an IdeaPad as a primary PC. You’ll find some preloaded apps on many IdeaPad systems, particularly those bought from big-box stores. Look for IdeaPad models prepped by the Microsoft Store (“Microsoft Signature” versions) if you’re dead-set on avoiding preinstalled bloatware. 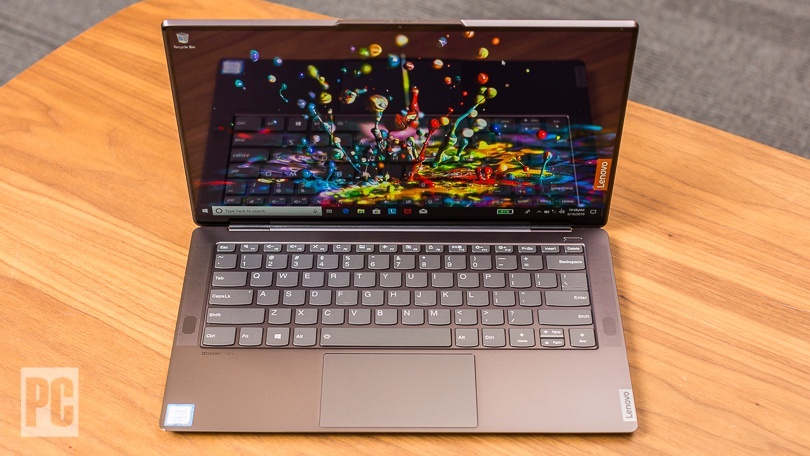 Note that the screen-size and 0-for-Intel, 5-for-AMD numbering scheme of the ThinkPads does not apply to the IdeaPads. The line is divided into 100, 300, 500, 700, and 900 series, with higher numbers for more premium designs with fancier features (and higher price tags). Most current models carry only one digit, such as IdeaPad 5 or Slim 7. Screen size isn’t specified; for example, you can find IdeaPad 5 models with both 14- and 15.6-inch displays.

Lenovo also offers a host of IdeaPad Chromebooks, which are popular choices for buyers on a budget. Google’s Chrome OS is simple to manage and use, since it centers on the Chrome Web browser and related apps. Lenovo’s Chromebook lineup includes inexpensive IdeaPad consumer models, as well as more rugged ThinkPad-branded Chromebooks for businesses and schools. (See our picks for our best overall Chromebooks.)

Under the larger ThinkPad and IdeaPad umbrellas fall most of Lenovo’s wide range of touch-screen hybrids, which can function as both laptops and tablets: the Yoga and Flex laptops. Introduced in 2012, the first Yoga pioneered the 2-in-1 convertible laptop concept. Yoga laptops’ 360-degree screen hinges let you flip and fold the system into four positions: a conventional laptop mode, an easel-like stand mode for presentations, an A-frame or tent mode for viewing videos or using touch apps on an airline tray table, and a tablet mode for reading or for scribbling and sketching with a stylus.

In addition to high-end consumer systems called simply Lenovo Yogas, you’ll find ThinkPad Yogas and ThinkBook Yogas that target a business audience. They follow the naming and numbering schemes for the lines they fit into, such as the ThinkPad X1 series. There’s even a ThinkPad C13 Yoga Chromebook. 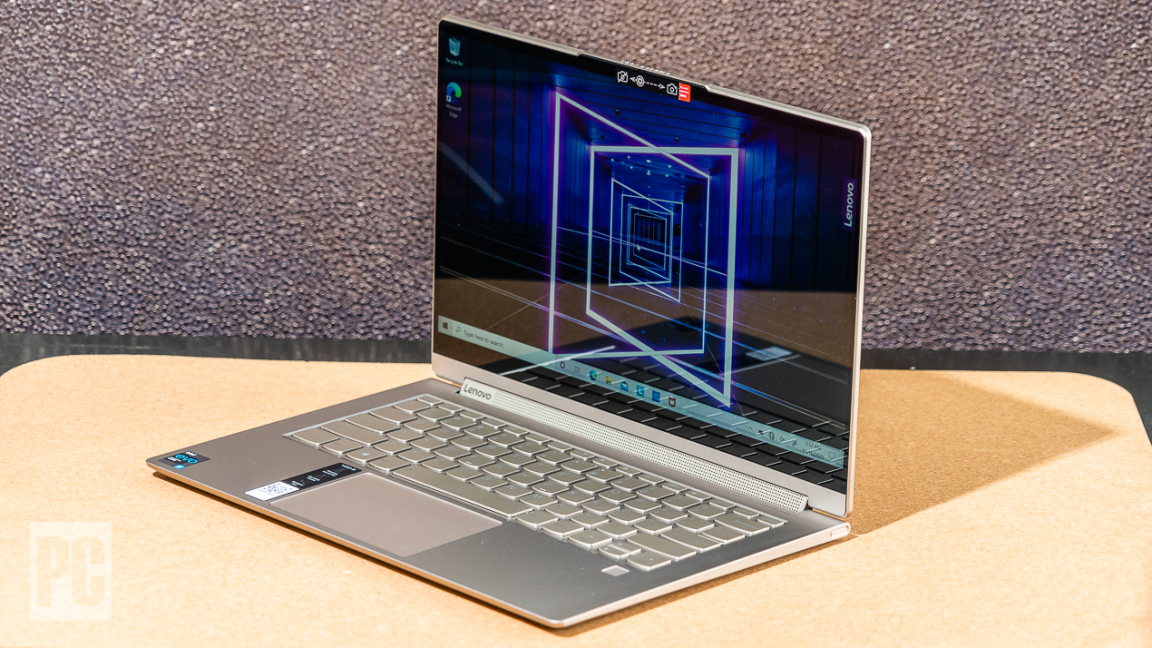 The Flex models, meanwhile, are broadly similar but tend to be cheaper than Yogas. At various times, the Flexes have been their own brand, though at this writing they’re marketed under the IdeaPad banner. The latest Yogas and Flexes follow the single-digit naming scheme of the IdeaPads, using just 7 and 9, though one Yoga 6 model throws a curveball into the works…just because. 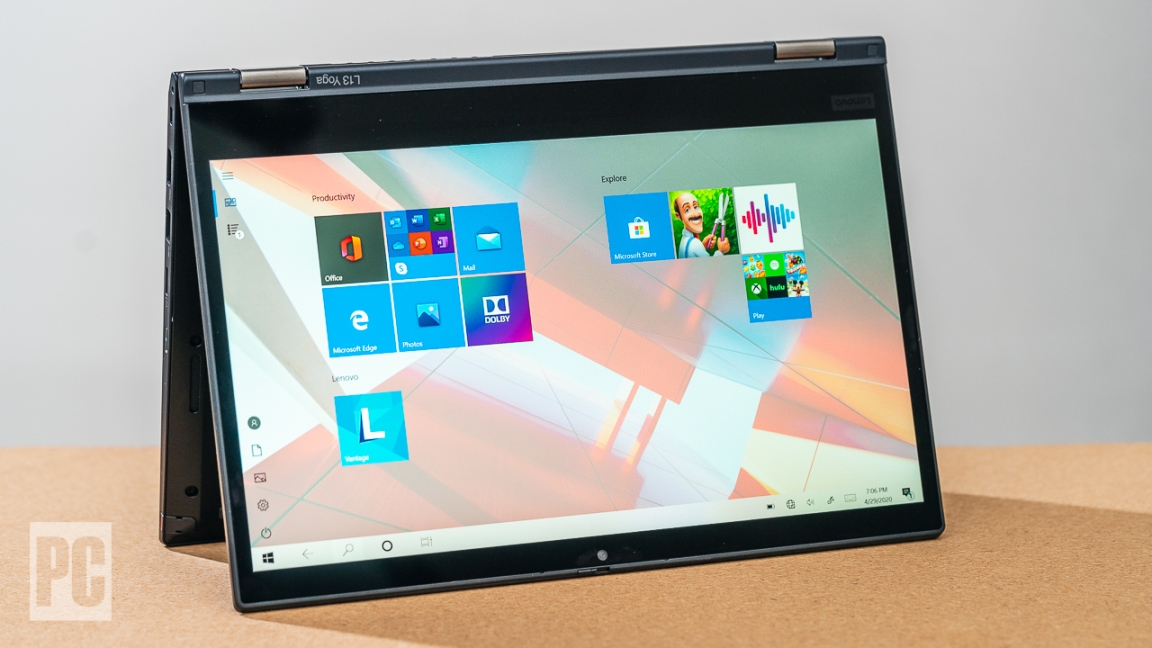 With these machines, the screen stays attached to the keyboard, meaning they’re 2-in-1 convertibles as opposed to detachables—Windows 10 tablets with removable keyboards akin to Microsoft’s Surface Pro slates. For some years, Lenovo offered a ThinkPad X1 Tablet, a business device with one of the best detachable keyboards on the market. It’s just re-emerged as the ThinkPad X12 Detachable. The other prominent detachable 2-in-1 we’ve seen of late from Lenovo is the company’s low-cost, consumer-minded Chromebook Duet for students and budget browsers.

Finally, to keep up with the growing popularity of PC gaming, Lenovo launched an all-new laptop line, the Legion family, in 2017. It did this to differentiate its gaming systems from the main IdeaPad line, where the gaming rigs were known as “IdeaPad Y” models. (Even today, Legion laptops have a Y-shaped insignia on their lids.) The Legion brand includes both gaming laptops and desktops. That said, in 2020, Lenovo did reintroduce some IdeaPad Gaming models for players on tight budgets. 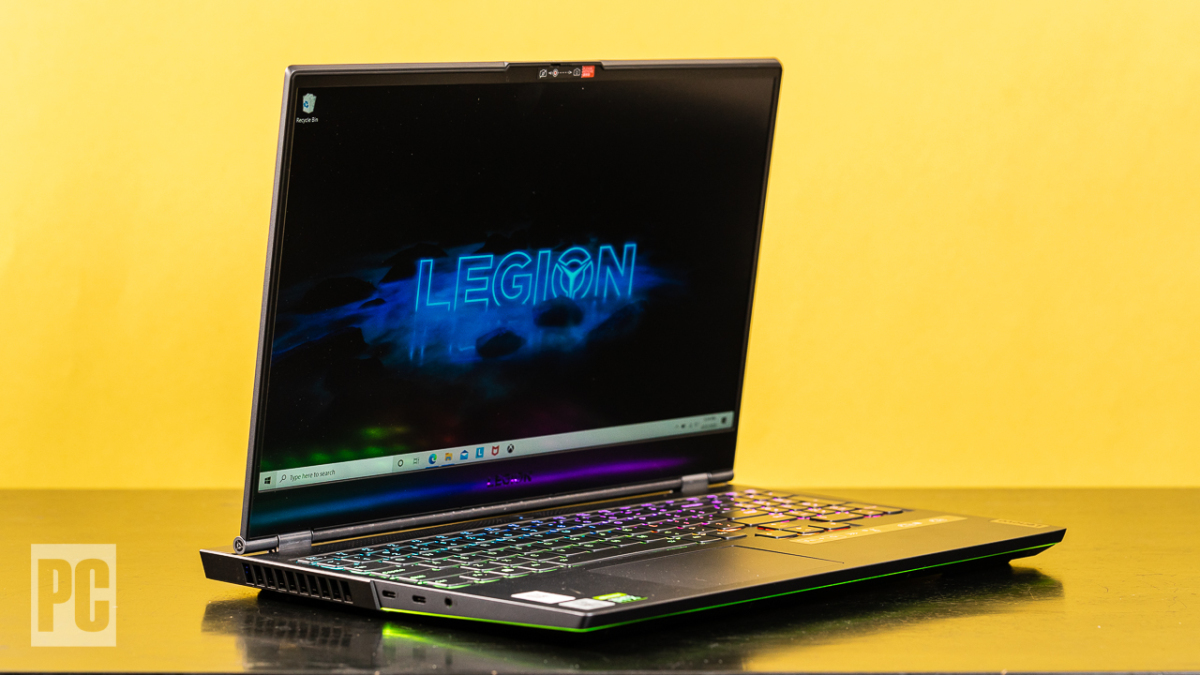 While at this writing an older Legion Y540 is still available, current models bear single digits, either a “5” or a “7” for mainstream and flagship gamers respectively. Legions with an “i” suffix use Intel Core processors, while others rely on AMD Ryzen power. The Legion family’s pricing, given the models’ specs and feature sets, has been attractive. You’ll see Legion laptops in not only the familiar 15.6- and 17.3-inch screen sizes, but 16 inches (in the case of the Legion 5 Pro), and in a mix of distinctive designs, with more features specifically aimed at a gaming audience than the IdeaPad Gaming models ever had.

So, Which Lenovo Laptop Should I Buy?

For more of our favorite machines (that is, ones outside the Lenovo-sphere), check out our 10 favorite laptops overall, as well as our guides to the best cheap laptops and business laptops. But for our current, ever-evolving list of Lenovo favorites, scroll on down.