Apple finally lets you rate its apps on the App Store 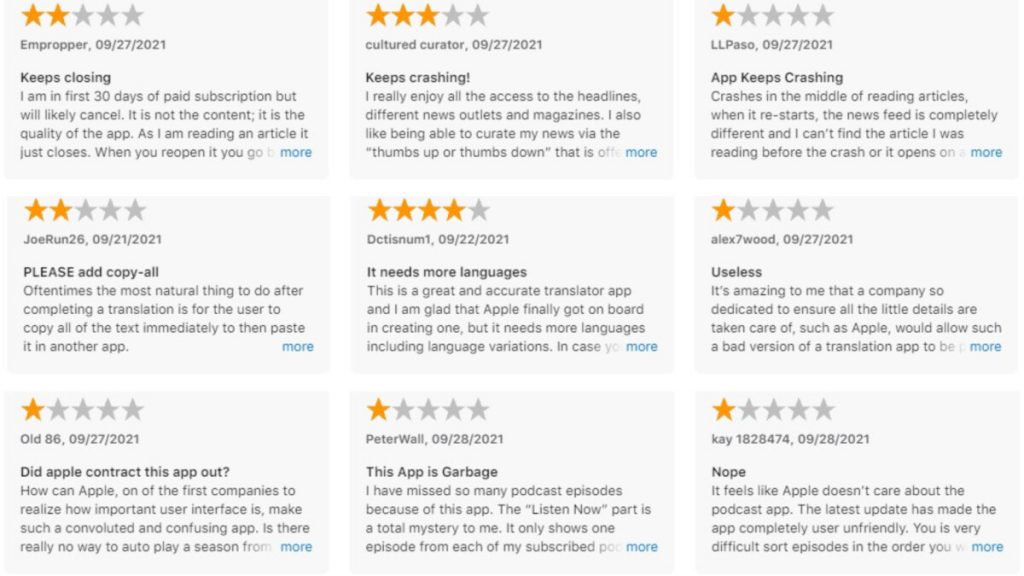 Apple’s stock apps on the App Store have long been exempt from getting user reviews and ratings, unlike all the third-party applications. It seems as though those times are finally over since said apps have now been opened to criticism, and people are not holding back on it.

To specify, you can now rate and review any Apple app that can be deleted and reinstalled through the App Store. That includes apps like Apple Music, Stocks, Calculator, and excludes others like Phone or Messages since they are not in the store but rather come baked into the software itself.

Apple has not come out with any official statement or announcement regarding this change.

How are the Apple apps faring?

Now, since the ability to rate them is still quite new, the number of ratings currently varies anywhere from 20 to 300. Nevertheless, these early reviews are already proving to be very revealing of what users think of Apple’s stock apps.

For example, one of the more popular ones, the Podcasts app, is doing noticeably worse than all others. As of writing this article, it has 156 reviews, and it only manages to get a 2.0 rating with people complaining that the app’s interface is not intuitive and user-unfriendly.

Next in line comes the Translate app, which manages to get a 2.2 rating out of 99 reviews. Here, the biggest issue users are having is with the changes that came in with iOS 15. Another common criticism is that you cannot copy and paste the translations you get.

Apple News has a score that is slightly better than those already mentioned, averaging a 2.3 rating out of 140 reviews. However, it seems that the app is suffering from a major crashing issue, as users are reporting it closing on them while reading articles.

In general, none of the Apple stock apps is getting a lot of love from the community, with the best performing one being Voice Memos, which currently stands at a 4.1 out of 29 reviews. Others like Stocks are also doing decently well, with 3.8 out of 39. Apple Music, on the other hand, is getting a lot of criticism for being laggy, having bad design, and some functions not working properly.It seems Apple has its work cut out for it, that is of course, if it intends on putting out this fire that has risen. If anything, now users who actually like these stock apps but have issues with them and want them improved can pressure the tech giant into taking some action.