Lenovo’s Legion 9000K series is expected to support PCIe 5.0 and DDR5 memory. It is also speculated that it will ship with the Intel Z690 motherboard. The Intel Z690 “will carry the LGA 1700 socket which is designed around Alder Lake and future generation CPUs. It also looks like only the flagship Z690 motherboards will be able to support DDR5 memory with native speeds of up to 4800 MHz whereas cheaper motherboards based on mainstream & budget-tier chipsets (H670, B650, H610) will retain DDR4-3200 support.” 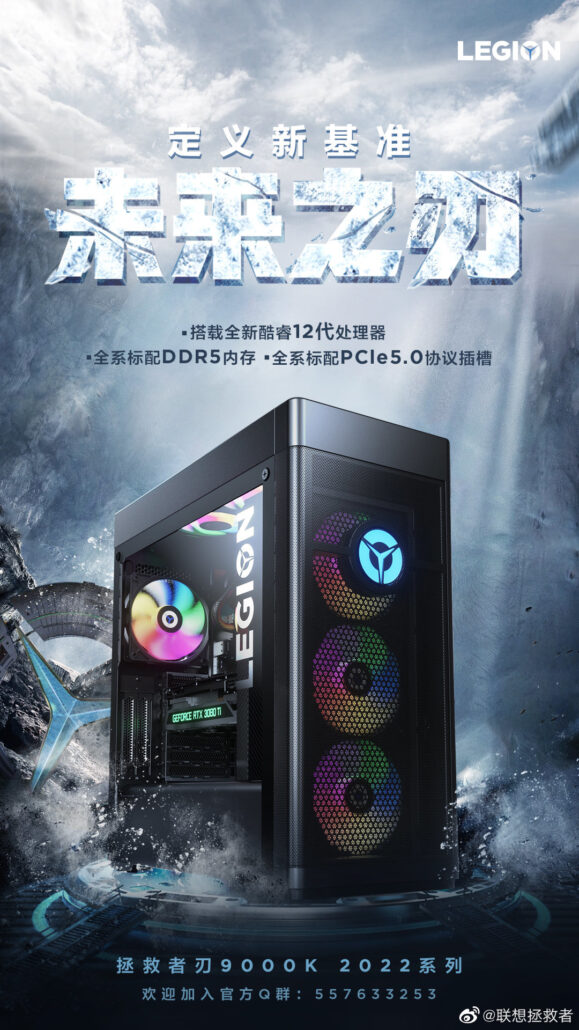 The graphics card in the advertisement appears to be the NVIDIA GeForce RTX 3080 Ti. NVIDIA’s GeForce RTX 3080 Ti showcases “the PG132-SKU18 PCB design and the GA102-225-KD-A1 graphics core.” The GA102-225 GPU features “10240 CUDA cores within a total of 80 SM units. The GPU features a clock speed of 1365 MHz base and 1665 MHz boost, both of which are slower than the existing GA102 GeForce RTX GPUs.” With the manufacturer showcasing the NVIDIA GeForce RTX 3080 Ti edition in their advertisement, it is clearly sending a message to consumers and the media that the newest gaming desktop PC will not be utilizing PCIe 5.0 technology.

Website ITHome has recently reported that Lenovo’s newest Legion 9000K series gaming PC will release towards the end of October, and has speculated that the company will possibly offer preorders for the product. The October 29th date coincides with Intel’s release of their Alder Lake-S processors that are also expected to drop on preorder the same day.

Intel’s Alder Lake-S CPU is expected to launch on November 4, 2021, as well as ship the same day to consumers.

The Intel Alder Lake-S Desktop CPU lineup will include the 12th Gen Core processors. Intel will kick off its lineup with the introductory ‘K’ and ‘Non-K’ chips which will be followed by more mainstream variants in the following weeks. Our sources have confirmed that the Intel 12th Gen Core processor lineup along with the Z690 motherboards will be readily available on 19th November. Intel will also hold a pre-launch announcement where they would disclose the prices, specifications, and general performance numbers of their next-gen family during 27th & 28th October during the ‘Innovation’ event.