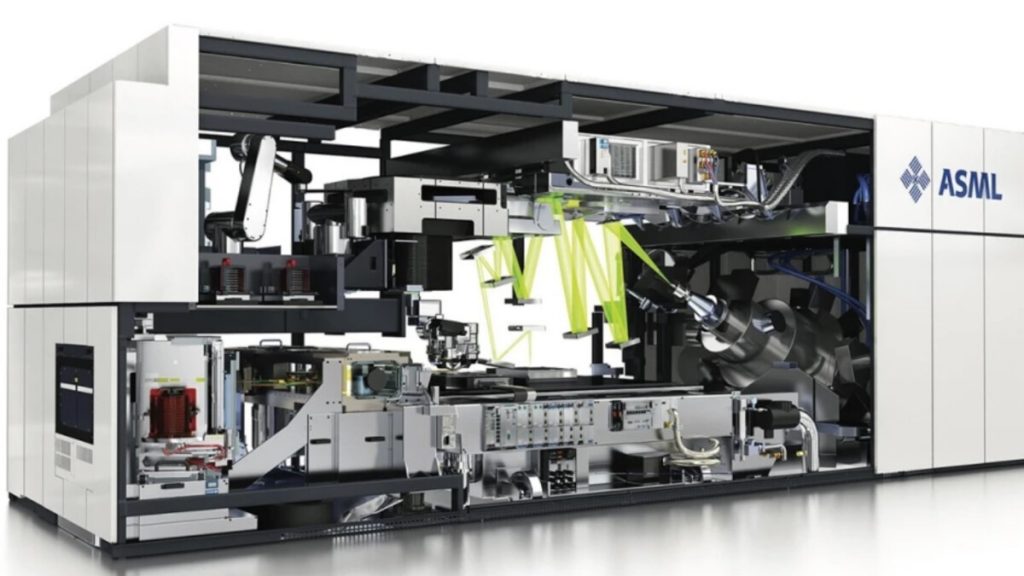 The latest EUV machine is expected to be released in 2023

The latest chipset designed by Apple for the iPhone 13 series is the A15 Bionic built by TSMC using its enhanced 5nm process node. This chip carries 15 billion transistors and has a transistor density of 135.14 million per square mm. To produce these chips, foundries like TSMC have to etch the features of each chip on silicon wafers that get cut into individual chips.

But as process nodes and transistor sizes continue to drop, how can foundries mark up wafers with lines thin enough to show smaller and smaller features? This was solved with the launch in 2017 of the extreme ultraviolet lithography (EUV) machine. The industry leader is a Dutch outfit named ASML; the latter says that it has developed the next generation of EUV machines that can help keep Moore’s Law alive as we continue to see more powerful and energy-efficient chipsets powering more powerful phones.

ASML says that its next-generation EUV machine could extend the life of Moore’s Law for another decade. These EUV machines are not cheap; each one costs around $150 million and we don’t believe that ASML offers coupons on Honey. This is a complex machine, too, with over 100,000 parts and 1 1/4 miles of cable packed into each unit. The pricing and complexity of these machines lead TechSpot to point out that most EUVs are sold to top foundries like TSMC, Samsung, and Intel.
The U.S., trying to keep China from becoming self-sufficient when it comes to the production of chips, has blocked the export of these machines to China which has made it difficult for that country’s top foundry, SMIC, to compete with TSMC and Samsung.
Last month we told you about the next-generation EUV machine being developed by ASML and now we have some more information. Just yesterday ASML held its annual Investor Day event and announced that Samsung’s new 16Gb LPDDR5 DRAM component will be the first memory chip produced using EUV. The next-generation EUV machine will be launched in 2023 and ASML notes that by taking the numerical aperture (which measures the amount of light that can be collected and focused by the machine) from .33 NA to .55NA, foundries will be able to build chips with process nodes beyond the 2nm that roadmaps currently end at.

Next year’s iPhone is expected to use a 4nm chipset

Extending the life of Moore’s Law is very important to the future of smartphones. To show you how far we’ve come, in 2010 the Apple iPhone 4 was powered by the A4 chip built by Samsung using the 45nm process node. The aforementioned A15 Bionic, as we already pointed out, was made using TSMC’s enhanced 5nm process node. Next year, TSMC was supposed to start using the 3nm process for the A16 Bionic but the world’s largest foundry has been forced to delay 3nm production due to the complexity of using that process node.

As a result, TSMC plans on using a 4nm process node for Apple’s 2022 A-series chipset. As a result, the iPhone 14 line might not be as powerful or energy-efficient as originally thought. Samsung is expected to produce the next-gen Snapdragon 898 SoC also using the 4nm process. That means that we might have to wait until 2023’s iPhone 15 line to see an iPhone contain a 3nm chipset.

Thanks to the next-generation EUV machine, we could see faster iPhone and Android handsets sucking out less battery life up until 2033. And that buys all of those geniuses working at the top foundries some time to find the next big thing that will keep Moore’s Law alive.