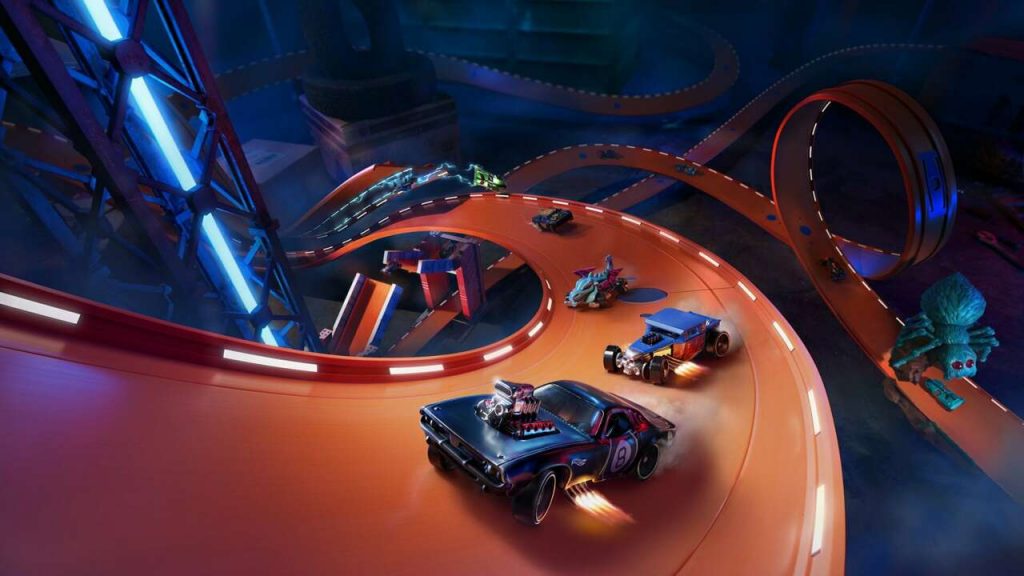 Combining fast arcade racing with nostalgic plastic, Hot Wheels Unleashed aims to give players the white-knuckle toy car racing experience the brand’s commercials always promised. Complete with a mixture of real cars, licensed vehicles like the DeLorean from Back to the Future, and iconic Hot Wheels originals like the Bone Shaker, Hot Wheels Unleashed embraces the brand, letting you speed through creatively constructed plastic raceways in diminutive toy cars. Guiding these plastic vehicles through vibrantly colored race tracks housed in oversized rooms very effectively evokes the memory of setting up the original toys in my own living room when I was a kid, and that, along with stellar driving mechanics and feel, makes Hot Wheels Unleashed a joy to play.

Hot Wheels Unleashed’s City Rumble mode takes the place of a single-player campaign, offering up an overview map filled with quick races, time trials, secrets, and five boss battles that can be selected. Completing an event allows you to advance further down a particular progression path, either making your way towards the next boss battle or finding an extra reward in the city. Each mission offers up rewards in the form of upgrade materials, coins, and unlockables that are either new tracks for the quick play mode or new items to decorate the basement environment. All of this keeps the single-player mode relatively simple, limiting the barriers between you and the next action-packed race.

The driving in Hot Wheels Unleashed hits the sweet spot of arcade-style racing, offering simple controls that still offer enough depth to feel rewarding. The game features only a gas pedal, a brake pedal, and a boost button. The brake can be used to drift, and that’s as complicated as the racing gets. However, with each car having different handling and speed, mastering corner drifts and boost-timing is a challenging and rewarding experience. Learning the best timing for using boost on a loop or when to lay off the speed coming into a tight corner changes from vehicle to vehicle, delivering the necessary depth to give the game some longevity. Heavier vehicles like food trucks don’t have as much speed but control more easily while racing and drifting, while lighter vehicles move faster, but can be more difficult to control. Lighter vehicles also have a higher chance of flipping over if you take a turn too hard or if another car boosts into you, so there are strategic considerations to be made, too.

The race tracks, meanwhile, come in the classic Hot Wheels orange or a few alternate colors. All races are either three laps or a single point-to-point race which is disappointing, since Hot Wheels feels uniquely suited to include more unique event types, like a knockout race or stunt challenges. Each map does feature a combination of boosts, loops, jumps, and obstacles to create unique experiences. The obstacles in the game come in the form of set-pieces, like giant spiders that hang over the track and shoot out webs that stop cars in their tracks, or simpler obstructions like fans that blow against cars.

There are other set-pieces that aren’t obstacles, like the T-Rex mouth starting pad and the parking garage, which add extra personality to the tracks. The biggest issue with the set-pieces is that there are a limited number of them and they are used sparingly. The massive Hot Wheels set-pieces are an essential part of the real-world toy and serve to provide more visual personality to tracks that otherwise all look very similar, even if they are uniquely designed. The set-pieces in-game are impressive when they are used and provide variety, but there just aren’t enough of them. And this feeds into Hot Wheels Unleashed’s biggest issue, which is the lack of visual variety. All of the tracks begin to blur together, especially when multiple tracks in the same environment are played back-to-back. All of the tracks have names and unique designs, but they never feel truly memorable. Even the five boss battles, all featuring a different obstacle set piece, don’t quite feel memorable in the end. Hot Wheels Unleashed certainly has plenty of prebuilt tracks and the option to download player-made ones, so it isn’t a lack of variety in the road, just visual stimuli.

While each prebuilt race track has different layouts and obstacles, all of the races take place in one of five environments: the basement, garage, skatepark, skyscraper, or college campus. Unfortunately, these environments become stale over time, even when the track itself still feels fresh. The basement can be customized, but the options are slim and some are locked behind coins. These coins are also used to unlock new cars, so spending them on decorations feels like a waste.

The set-pieces in-game are impressive when they are used and provide variety, but there just aren’t enough of them, and this feeds into Hot Wheels Unleashed’s biggest issue, which is the lack of visual variety

As for earning new vehicles, Hot Wheels Unleashed dishes out new cars freely. Cars are obtained from either blind boxes, limited-time deals in the shop, or as rewards for exploring the side path in City Rumble. Neither blind boxes nor limited-time deals can be purchased with real money, instead coming from earning coins in-game. Missions regularly reward coins and occasionally offer blind boxes, so you frequently unlock new cars, letting you switch up how the driving feels. Unfortunately, if you are hoping to get a specific licensed vehicle like the DeLorean, Batmobile, or Teenage Mutant Ninja Turtles Party Wagon, you will need to get lucky with a blind box or one of the rotating shop items. These rarer cars also come with maxed-out stats, so pulling one earlier on in the campaign can make for an easier time, though it does discourage the use of other cars until you have the materials to upgrade them.

Each vehicle has different stats and rarity levels, but all cars can be upgraded, which means any car can be a viable contender with some work done to it. Blind boxes do frequently give out duplicate vehicles, especially of the common rated cars, but the extra cars can be traded in for either upgrade materials or coins. The upgrade materials are earned much slower than the coins, so trading in unwanted cars is a welcome way to speed up the grind.

The music follows suit, with a limited number of vocal-less electronic tracks in the game, all of which feel too similar. The music definitely matches the high-energy arcade vibe of Hot Wheels Unleashed, but a lack of variety means it becomes repetitive after a while.

The racing does hold up over the few dozen races it takes to unlock and beat all five bosses throughout the city, and continues to be engaging as you do a few dozen more races to complete all the events. For extra content, there are a limited number of secret panels across the map, all of which can be unlocked by completing secret missions. Although a couple of secret missions are used to block progress towards the bosses, panels spell out the task that needs to be completed pretty clearly. These missions require you to beat a specific boss or ask you to complete an event with a certain car. In my case, the car I needed to advance the story was one given out as a side path reward that I had already completed, so there was no need to grind out blind boxes to advance.

For those looking to build tracks, editor tools in Hot Wheels Unleashed offer tons of options in pieces to work with and shape the track. The game also allows a pretty high number of pieces (placements are governed by an overall points value, with each object carrying a specific cost) to be placed down, so you can make some marathon-length tracks. The menus and controls for the track editor are clunky on a controller, but not enough to prevent you from putting together a good track. The tools for sharing the tracks with other players are poor. You can upload any track you built to your “shared list” and players can download it by looking at your profile, but there is no way to search through maps other players have uploaded without going directly to their profile. Outside of the single-player campaign, you can play quick races or time trials on any of the tracks you have unlocked or built.

Online multiplayer, meanwhile, offers both private rooms and random matchmaking. While there isn’t any ranking or reward system outside of placements on individual races, the online multiplayer offers up the chance to see different community-made maps. Each new race course is voted for between five options: three prebuilt tracks and two custom tracks. This system results in a good mix of the more intense and wackier community maps and the more focused pre-built maps.

Hot Wheels Unleashed captures the magic of plastic cars with fast and smooth racing, but the toy box is a little shallow. There are numerous maps and cars, but the limited amount of environments, music, and set-pieces make for an experience that starts to get old quickly. As a result, Hot Wheels Unleashed rides the high of its racing, which feels like butter when drifting around corners and speeding through loop-the-loops, using whichever food truck or licensed car you pull out of the blind box, but doesn’t bring enough of the license’s personality over.