Perseverance Rover Is Tiny Speck in Mars Image From Orbit 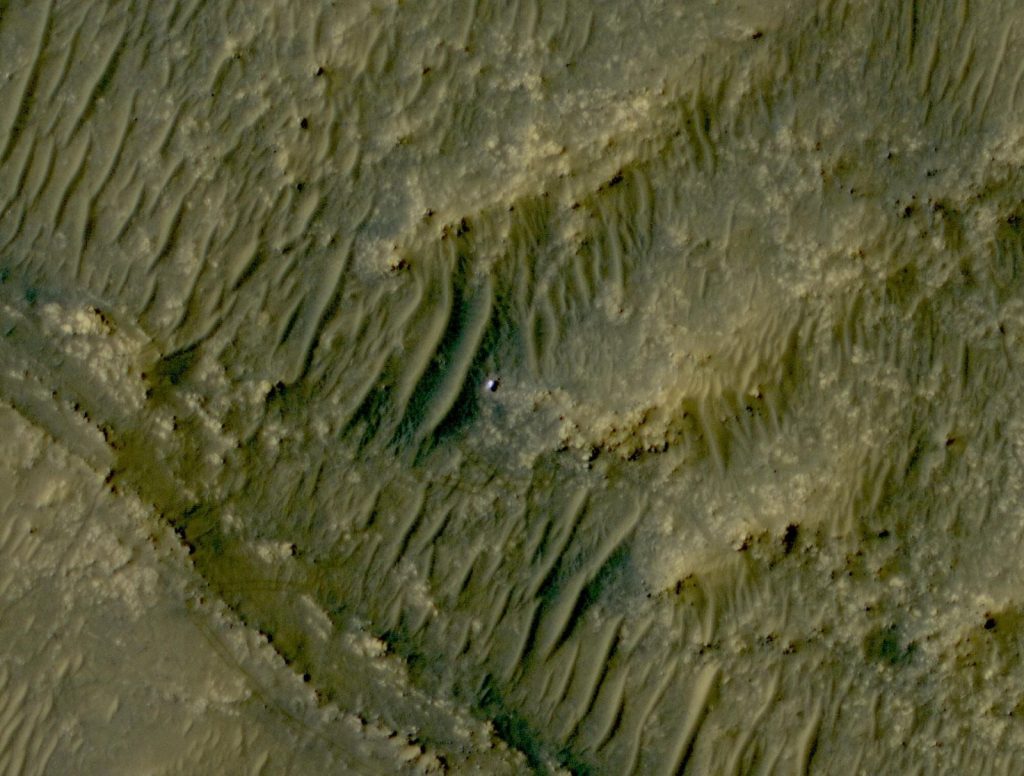 You can see NASA’s Perseverance rover as spotted from the Martian skies in this image, captured by the High-Resolution Imaging Science Experiment (HiRISE) camera on board the Mars Reconnaissance Orbiter. The Mars Reconnaissance Orbiter observes Mars from orbit to study its geology and climate, and HiRISE is specifically designed to take high-resolution images of the planet’s surface. That makes it the perfect tool for spotting the rover from high above.

The Perseverance rover is currently exploring the South Séítah region of the Jezero Crater, where it is wending between sand dunes, boulders, and rocky outcrops.

From today, October 2, we’ll be entering a quiet period for NASA’s Mars explorers including the Perseverance and Curiosity rovers, the InSight lander, and orbiters like Odyssey, MAVEN, and the Mars Reconnaissance Orbiter.

For the next two weeks, Earth and Mars will be on the opposite sides of the sun from each other — called a Mars solar conjunction — making it difficult to communicate between the two planets. This is because the sun throws out hot ionized gas which reaches out into space, and which can disrupt any radio signals that are sent through it.

NASA will be cutting communications with its Mars explorers during this period to make sure that it doesn’t send any signals which could get garbled and cause disruptions to the missions.

However, the Mars missions won’t be sitting idle. Perseverance, for example, will use this quiet time to take measurements of the Martian weather using its Mars Environmental Dynamics Analyzer, or MEDA, instrument. MEDA can measure factors like wind speed and air temperature to get a better understanding of local weather conditions — and in addition, its cameras will be looking out for dust devils.