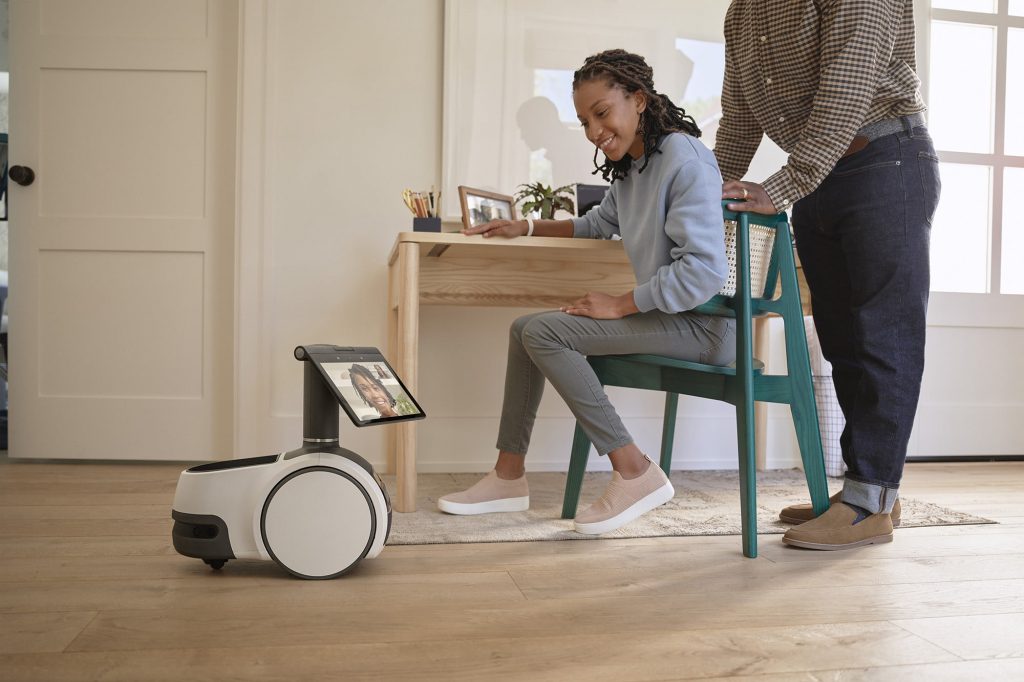 The recent emergence of the Amazon Astro has renewed discussion about the utility of household robots. For some people, the Astro may have been the first home robot they had heard of, but it’s not even close to the only option. There are numerous “home” robots on the market, but they don’t all have the same functionality as Astro. On the other hand, a lot of these robots are significantly less expensive than Astro.

Whether it’s to keep an eye out on your pets while you’re away, or a robot that will help with teaching kids, you don’t have to wait to for the Amazon Astro to be released to have a useful home robot.

The Miko 2 is described as an “advanced personal robot for kids.” It has a decidedly friendly look to it, with an animated face and upright body. The Miko 2 features a wide-angle IPS display, a built-in camera, and a variety of proximity sensors to keep it from crashing into things. Two speakers on its sides play music and sounds. Like Astro, the Miko 2 uses computer vision to identify and remember not only faces, but also objects and surroundings.

Your child can speak directly to the robot and Miko 2 will respond. It also uses A.I. algorithms and natural cues to match how your child is feeling. For example, an upset child won’t be greeted by an overly cheery robot — instead, it might express concern. These same algorithms are put into use for Miko 2 to learn your child’s preferences and become their friend.

You can also select from a multitude of different topics for Miko 2 to teach your child. These lessons aren’t delivered in a traditional way, but are instead brought up in conversation to encourage questions and curiosity. The Miko 2 retails for $400 and includes free shipping worldwide, as well as a onme-year manufacturer’s warranty in case anything goes wrong.

The Miko 2 is aimed at kids, while the Rocki Robot is just for your pets. Think of it as a way to stay connected with your pets, even while you’re away. Rocki has it all: Automatic feeding, swappable toy attachments, and a camera for keeping an eye on your pet when you aren’t at home. It’s not an all-around home robot, but rather one with a very specific focus.

The automatic feeder isn’t really for feeding, but for snacks. It can hold up to 15 servings of treats that you can disperse on command. You can do this to help train your pet while you’re away; for example, you can ask your new puppy to get off the couch. If they listen, they get a treat. It can also be a good way to soothe a pet that might have separation anxiety. The camera (combined with the Rocki App) lets you peek in on your animals, talk to them, and even record video or take a snapshot if they’re doing something funny.

The robot toy arm lets you play with your pet while you’re out. By default, the toy is a laser pointer, but you can put different types of toys on the arm. The Rocki can operate for several days or a week without a recharge, and its wheels allow it to move across carpets and other surfaces with ease. It can turn quickly and even follow your pets around the home. The Rocki retails for $250.

The Vector Robot by Anki is probably the most like Astro of any robot on this list, at least in terms of functionality. The robot is tiny, coming in at less than three inches tall, so it definitely won’t be able to transport cargo — however, it can hang out and provide Alexa on the go.

Vector is voice-activated and can do everything from taking photos to setting timers. It can perform these features without Alexa; however, activating its Alexa functionality only makes it more useful. Vector does include powerful navigation features that allow it to dodge obstacles and recognize people. When low on power, Vector will automatically make its way back to a charging station.

Updates are applied automatically over Wi-Fi. Vector is built with a lot of personality. The robot is designed to be something of a little companion with functionality, but its size limits how useful it can really be. There are also a few Alexa features Vector can’t perform, like playing music — but if you start up a song on a different speaker, you can ask Vector to dance. The robot is available through Amazon for $465.

The Enabot Ebo Pro is an adorable home robot with a focus on home security. It uses powerful A.I. to track facial recognition, but not just of humans. The Ebo Pro can also recognize your pets’ faces. This lets it follow your pet around the home to interact with and monitor it. The Ebo Pro can even record video clips independently of any command from you, before sending the video materials to your phone.

The Ebo Pro features two-way audio that allows you to communicate with both pets and family members. The 1080p video stream gives you a wide-angle view into your home so that you can check on loved ones and monitor your house while you’re away. The Ebo Pro can move autonomously and rotate, roll, and turn almost silently thanks to its brushless motor.

The Ebo Pro has 32GB of onboard memory and can connect to both the 2.4 and 5.8 Wi-Fi frequencies. It moves through the home at a maximum speed of around 1.6 meters per second. Again, like the Vector, the Ebo Pro isn’t a large robot — but it’s small size makes it the perfect way to interact with pets and keep a somewhat subtle eye on your home.

The Samsung Jet Bot AI+ is a robot vacuum that does more than clean. It can patrol your home and keep an eye out for trouble thanks to its built-in camera, which allows the Jet Bot AI+ to stream through the SmartThings app as it cleans. With its tread-like wheels, this thing is more akin to a robot tank than a vacuum. While it’s certainly attention-grabbing, it doesn’t look like it has a camera inside it. In a way, this makes it one of the most ideal home security devices on the market. A thief likely wouldn’t suspect they’re on camera.

You can set up no-go zones to keep the Jet Bot AI+ out of specific areas. If you need to check on something in your home, you can ask it to clean any room in your house. You can label individual rooms through the Smart Map. While it’s not the most convenient way to go investigate a specific area — after all, it will be vacuuming the entire time — it does add a layer of integration to this robot that more smart home devices need.

The Astro is nothing new. While it has many powerful and interesting features, it’s building on the shoulders of existing models. However, each iteration of smart home robot is one step closer to a truly powerful, efficient robot. It might not be long before everyone has their own Rosey the Robot to help them clean.