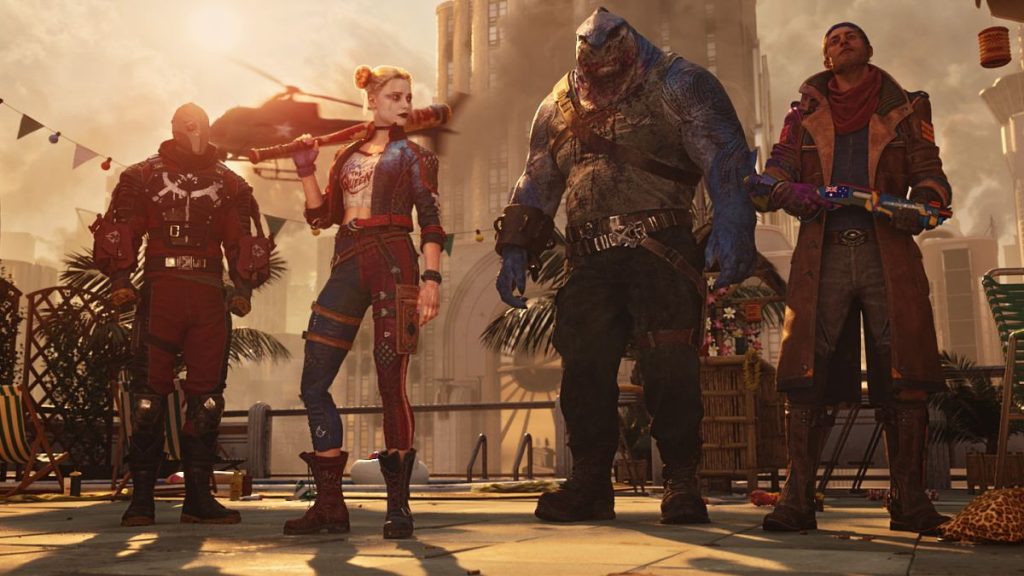 Hungry for details on Suicide Squad: Kill the Justice League, Rocksteady’s next triple-A outing? Then you’ve come to the right place.

Since its announcement at the DC FanDome presentation in 2020, we’ve learned that the game is set in the Arkham-verse Metropolis and will give players the choice between playing solo or with up to four players via online co-op. There’ll be four playable characters to choose from, each with their own “unique moveset” and “enhanced traversal abilities”: Harley Quinn (Dr. Harleen Quinzel), Deadshot (Floyd Lawton), King Shark (Nanaue), and Captain Boomerang (George “Digger” Harkness).

We’re expecting to learn more about the game during 2021’s DC FanDome in October but in the meantime we’ve gathered together all the latest news and rumors about Suicide Squad: Kill the Justice League below.

The announcement of Suicide Squad: Kill the Justice League was confirmed on August 7, 2020 via the game’s official Twitter account.

An image of Superman facing away with a target locked upon his head revealing the games’ title confirmed its existence before pointing fans to DC FanDome, a virtual online convention due to take place later that month – where Rocksteady officially unveiled the Suicide Squad game’s 2022 release window and first trailer.

Outside of a 2022 release window, Rocksteady and Warner Bros. have yet to give a specific release date for Suicide Squad: Kill the Justice League.

Historically the developer has launched games between May and October, giving us a slight indication of what date the Suicide Squad game could land on.

As part of DC FanDome on August 22, 2020, Rocksteady premiered the first trailer of Suicide Squad: Kill the Justice League. It opens with a look at what seems to be supervillain Brainiac’s lair, before confirming the game’s location as Metropolis. Panning down we get the reveal of Harley Quinn, followed by her fellow Task Force X members: Captain Boomerang, Deadshot, and King Shark.

Suicide Squad instigator Amanda Waller speaks to Quinn through comms telling them to make their way to the Metropolis Grand Hotel as “alpha target” is now in the open and needs engaging. After a montage where the group takes on hordes of Brainiac’s army – to OutKast’s B.O.B – Bombs Over Baghdad – they reconverge on a roof. Quinn then tries to remember who they should be on the lookout for, until being suddenly interrupted by a helicopter explosive.

As the smoke clears, it appears that Superman has saved the helicopter pilot – only to decimate the human moments later via heat vision, while seemingly under the control of Brainiac. The group quickly realize that the Man of Steel is their “alpha target”, and the trailer ends as a boomerang comically hits Superman’s head, with Captain Boomerang uttering: “You shouldn’t have done that, shark”.

Check it out below:

Ahead of Suicide Squad: Kill the Justice League’s next big reveal at DC FanDome on October 16, some new key art has been released. The Artwork gives us a fresh look at the game’s four main playable characters: Harley Quinn, Deadshot, Captain Boomerang and King Shark. We don’t know when exactly during DC FanDome the game will make an appearance but we can be sure it’ll be present in some capacity during the show.

It looks like Suicide Squad: Kill the Justice League won’t be expanding its roster of playable characters beyond the four that have already been confirmed. As reported by PCGamesN, a recent press release for the game states that “The game’s original narrative follows the four Suicide Squad members as they take on an impossible mission to save Earth and kill the World’s Greatest DC Super Heroes,” which strongly suggests no more will be added. This definitely casts doubt on previous rumors that the game will be an evolving live service title in the style of Marvel’s Avengers.

DC FanDome returns and Suicide Squad: Kill the Justice League is on the lineup

DC has confirmed that its online event DC FanDome will be making a return in 2021, specifically on October 16 and a recent trailer has Suicide Squad: Kill the Justice League on the lineup. What exactly we’ll learn about the game remains unclear but we do at least now know we can expect to see it in some capacity during the show.

A new trailer for DC Fandome 2021 has been released. pic.twitter.com/Cpyi4ZBCAfAugust 31, 2021

It was during the 2020 iteration of the show that Suicide Squad: Kill the Justice League was first revealed to the world so this is a perfect time for an update, especially as the game didn’t make an appearance during E3 2021. Alongside Gotham Knights (which will also be present) it’s one of the major superhero games that DC has in the works.

Gotham Knights, the DC game announced alongside Suicide Squad: Kill the Justice League has recently been delayed, its release date moving from sometime in 2021 to sometime in 2022. This means that both games are set to launch in the same year, making 2022 a big one for DC fans.

At the moment, there’s no indication that Suicide Squad: Kill the Justice League will be delayed like its more heroic counterpart, as Suicide Squad was already slated for a 2022 release and is in development with a separate studio.

According to a recently spotted advert for an internship (via IGN), Warner Bros Interactive Entertainment’s upcoming projects are going to have a “heavy focus on live service”.

There’s a section of the advert which states that “WBIE is currently involved in a variety of new projects, ranging from casual games to core games featuring our well-known franchises on all platforms (console, digital, mobile) with a heavy focus on live service. “

Generally, live service elements in a game will see it being updated by its developer after release with things like new features or storylines. It’s not uncommon in games these days and can be effective when done right but it can also be controversial when a game doesn’t get off to a strong start eg. Marvel’s Avengers.

Gotham Knights developer WB Games Montreal has told IGN that that its co-op and single-player game won’t involve games-as-a-service elements, which means that there’s no guarantee every game published by Warner Bros Interactive Entertainment is going to be subject to this. Certainly, we haven’t seen any clear evidence that Suicide Squad will include live service elements and as result, we’re going to need to wait for official confirmation from Rocksteady before we can be sure.

“Fool had it coming. There’s only one Deadshot.” pic.twitter.com/pYWT3gjKbTDecember 8, 2020

“Where is Waller? Tell her I do not belong here.” pic.twitter.com/RUJQzl8qdxDecember 1, 2020

Kill the Justice League is a game that will appeal to those who like single-player and co-op gameplay as its main campaign supports both.

Rocksteady revealed at DC FanDome that players who opt for solo play will be able to switch between other members of the squad as they please, with the uncontrolled team members being handled by AI to play alongside you.

If you want friends to join you, they can jump into the shoes of the squad members you don’t want, with up to four players able to play at once. According to Rocksteady, this is going to be a seamless gameplay experience and the co-op will be drop-in, drop-out, so you can have friends playing with you one minute and go solo the next without it impacting your game.

Story
Details of the campaign are limited for the time being, except that we know that it is an “original narrative” set in the DC universe and a continuation of the Batman: Arkham-verse. Implanted with lethal explosives in their heads, the story follows the Suicide Squad as they look to save Earth and kill the world’s greatest DC superheroes, The Justice League.

Superman is the only member to have been shown off so far but we’re pretty confident in saying the likes of Wonder Woman, Aquaman, the Flash, Batman and so forth, will appear in throughout. The latter of which will be an interesting conundrum, considering how Batman: Arkham Knight ended. Several rumors suggest The Dark Knight might work alongside the Suicide Squad in their attempts to thwart the mind-controlled Justice League.

During the DC FanDome panel, Rocksteady creative director Sefton Hill spoke about the narrative links that will continue on from the Arkham series, stating that: “a lot of through threads and storylines you’re gonna see come to fruition in this game”.

Open-world
Metropolis itself will serve as the open-world in Rocksteady’s Suicide Squad. The city is best known as the home of Superman, takes inspiration from the likes of Toronto and New York, while also being neighbors with Gotham. Hill described Metropolis as the game’s “fifth character” and hopes it will serve as a “love letter to DC fans”.

Voice actors
So far, two out of the four Suicide Squad members have been confirmed, with long-time Harley Quinn veteran voice actor Tara Strong resuming the role once more. King Shark, on the other hand, will be voiced by WWE wrestler Nuufolau Joel Seanoa a.k.a. Samoa Joe.

While no official word on the voice of Captain Boomerang, it’s heavily rumored that Chris Parson has been given the role. He previously voiced Junkrat in Overwatch and there is a huge resemblance when listening to the two.

Deadshot is a little harder to pin down. Chris Cox previously voiced the one-shot wonder in Arkham City and Arkham Origins, both of which are set in the same universe. This Deadshot has been confirmed to be the Floyd Lawton interpretation of the character too, however, there’s a huge gaping flaw why it doesn’t seem to be Cox that’s returning.

For one, the audio clip sounds nothing like his version, and two – the most damming – this Deadshot is black, as opposed to the white version Cox portrayed. Therefore, without an established voice immediately jumping out at people, many believe it may be an up-and-comer. However, King Shark was killed in the direct-to-video Assault on Arkham, so the question of what is actually ‘canon’ is very much up in the air.

The last unconfirmed role we hear in the trailer (Superman doesn’t speak) is Amanda Wallace. CCH Pounder has voiced the Suicide Squad boss in Arkham Origins, Arkham Origins Blackgate, and Assault on Arkham, therefore, it’s not out of the realms of possibility that she will return once again/

Lego Batman star Will Arnett (who hosted the DC Fandome panel) also asked if he could appear in the game as an NPC, to which Hill replied that: “I think we can maybe make something work”. Something that would certainly make for a cool easter egg.

TechRadar reached out to Warner Bros. for confirmation of the voice actors, however, the company refused to comment at this time.