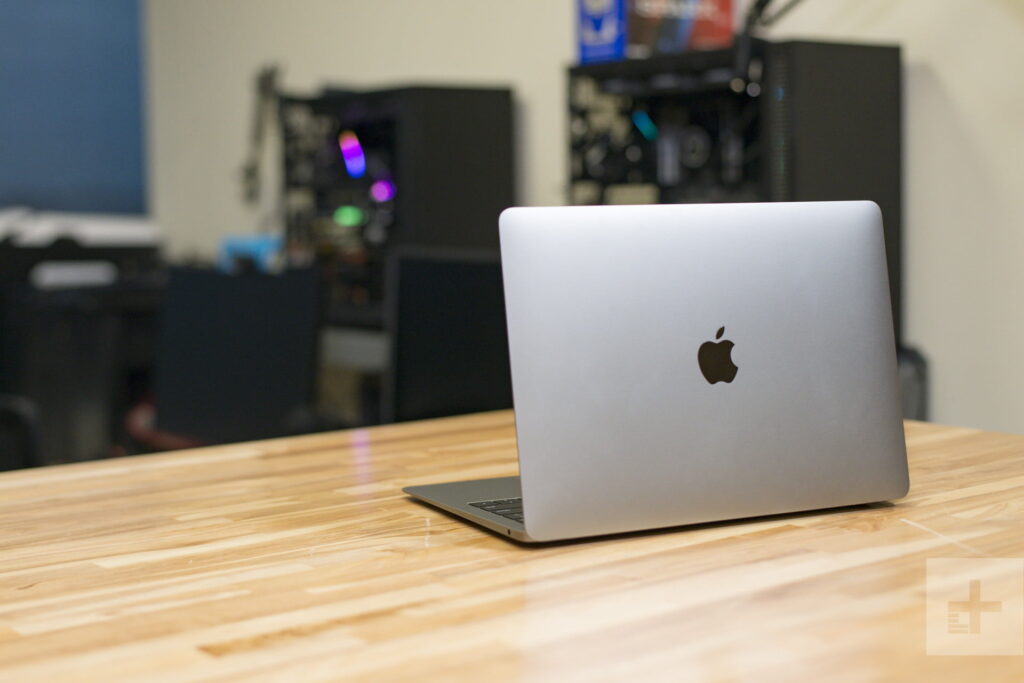 Everybody knows Apple for its excellent mobile devices (the company pretty much invented smartphones and tablets as we know them), but those of us who lived through the early days of personal computers will always remember the iconic Mac computers when we think of this brand. And while the rainbow-colored Apple logo may sadly be a thing of the past, the Mac line is still going strong, with the MacBook being far and away the most popular member of the family. MacBooks aren’t as cheap as most Chromebooks and Windows laptops, though — but this roundup of the week’s best MacBook deals and sales is a sure way to keep some money in your pocket.

If you love everything with an Apple logo and you’re hungry for more savings, then also check out these iPhone deals and iPad deals.


Released in late 2020, the new Apple M1 MacBook Air has better battery life and performance and is more secure than the older MacBook Air models with Intel processors.


Students and teachers with a valid .edu email address can enjoy exclusive pricing on the MacBook Air and MacBook Pro directly from the Apple Store.


Packing the latest M1 CPU, this 13-inch MacBook Pro is an incredibly capable machine that will handle your work and daily needs for years to come.


It doesn’t have the biggest screen, but it more than makes up for it with a spacious SSD storage and solid specs. With 11 hours of battery life, you’ll have plenty of time to work or play.


Looking for an entry-level MacBook? This MacBook Air is the ideal starting point, with its fantastic build quality and top-notch ease of use. Its thin and light design is great for traveling, too.


Score one of the latest and greatest 13-inch MacBook Pro laptops with a Touch Bar and great modern hardware for a nice discount. With specs like these, this MacBook will last you for years to come.


The 12-inch MacBook was recently discontinued, and this might be your last chance to score one for this cheap before it’s gone for good.


Need a ton of storage in a portable package? Look at this 13-inch MacBook Pro: You’ll get all the space you need with a 1TB SSD and a solid workhorse of a quad-core, eighth-gen, Core i5 processor.


With top-notch ease of use, this MacBook Air is ideal as a starter Mac. Its thin and light design is great for traveling, too.


The latest MacBook Pro is usually the priciest laptop in Apple’s stable, but this 2017 model won’t feel too long in the tooth in 2021 (and this refurbished deal lets you score it for much less).


If you don’t mind using a pre-owned Apple product, then you can snag this Apple MacBook Air for a steal, and it should work and look like new.


Treat yourself to a MacBook Pro with a brilliant 16-inch Retina display and a powerhouse of a processor which happens to be a six-core, ninth-generation Intel Core i7.


Frequent video conferences? The Apple 15″ MacBook Pro comes with a built-in FaceTime HD camera and omnidirectional mic to enhance the quality of your virtual meetings.


If your work has an emphasis on graphics (like game developing or film-making) then you can’t go wrong with this 16-inch MacBook Pro. It features AMD Radeon Pro 5500M graphics for quicker rendering.


The new MacBook Pro is pricey to be sure, but buying this mint condition Renewed unit from Amazon is a great way to stack up the savings on Apple’s premium 16-inch laptop.

In July 2019, Apple stopped selling the 12-inch MacBook on its website and in its stores, but you can still get it from third-party resellers. There are plenty of reasons to opt for it, too. Compared to the Air, not only is the MacBook’s screen smaller, but the device is also extremely thin and light. It hasn’t been updated since 2017, but it has the modern Mac look, including the large trackpad, butterfly-style keyboard, Retina display, and simplified port selection. Aside from a headphone jack, the laptop comes with just a single Thunderbolt 3 USB-C port. That means you can’t plug in a wired mouse and power at the same time, for example, unless you have an adapter.

The most recent version from 2017 received a bump to dual-core, seventh-generation Kaby Lake Intel processors. Like the MacBook Air, we found it to be fast enough to get through a normal day of productivity and web browsing. We’d recommend one of the newer MacBook Airs to most people, but for those who want the absolute smallest, most portable MacBook, this is your best option.

Amazon is currently selling the professionally Renewed and warranty-backed 2017 12-inch MacBook for as low as $514, which gets you an Intel Core m3 processor, 8GB of RAM and a 256GB SSD.

Before 2018, the MacBook Air hadn’t received a serious update for many years. The iconic silver look may have been revolutionary in 2012, but its thick bezels and lower-resolution screen had become outdated over the years. There have thankfully been a couple of revisions since then, but we can still recommend this reasonably recent 2017 model to people who have basic everyday needs and don’t want to shell out for a Pro. Its Intel Core processor and 8GB RAM will ensure it won’t feel too long in the tooth in 2020, even if it isn’t sporting the upgrades of the newer units. It’s also the cheapest way into the MacBook ecosystem, and that alone makes it worth your consideration.

If you’re in the market for a slightly older model and are willing to buy refurbished (in nearly like-new condition and backed by a warranty since it’s Amazon Renewed) so you can save some cash, the 2017 MacBook Air below is going for around $410 including delivery at the moment — a steal at this price.

In the middle of 2019, Apple gave the MacBook Air a complete makeover, bringing it up to speed with the rest of its MacBooks. These  2019 and 2020 revisions have a new look — thinner bezels, a smaller chassis, higher-resolution display, USB-C, as well as new color options like gold and space gray. The new MacBook Air also has some of the mainstays of modern Apple laptops such as the low-travel keyboard, oversized trackpad, and Touch ID fingerprint scanner.

The Air saw some hardware updates in 2020 too, including the addition of the newer 10th-gen Intel Core CPUs as well as the introduction of Apple’s own new M1 processor. We found it more than capable of handling day-to-day tasks, just don’t expect to be editing 4K video on it. That said, that MI CPU is pretty amazing and punches well above its weight. It has the best battery life of all the MacBooks, and also comes with the lowest starting price of around $1,000 right now.

If you’re in the market for a new M1 MacBook Air, then you can currently can enjoy a welcome discount off the usual price that knocks it down to $850. This deal gets you the superb new M1 processor, 8GB of RAM, and a 256GB SSD — perfect specs for an everyday laptop.

It had been rumored for months, but there was still a sense of excitement when Apple finally unveiled the 16-inch MacBook Pro in mid-November 2019. Many of the rumored features — the higher-resolution display, the new keyboard, and the Navi graphics — proved to be correct.

That means this is the biggest upgrade to the MacBook Pro line since it was redesigned in 2016. It takes features that had become standard in the MacBook Pro 15, like the Touch Bar and USB-C ports, and adds all-new features. For example, you can give it an 8TB SSD, the largest SSD available in any laptop, or if you need a huge amount of memory, there’s a 64GB RAM option. If you’re a pro and need power, the 16-inch MacBook Pro is the one to get.

Apple has now added the Touch Bar to all of its recent MacBook Pro models. The Touch Bar is a slim OLED touchscreen that takes the place of the function keys and is purpose-built for navigating MacOS and its software — but it’s admittedly not for everyone, so if you’d prefer a MacBook Pro without it, then you’ll have to opt for a last-gen model from 2017 or earlier.

Right now, you can score has this refurbished 13-inch non-Touch Bar MacBook Pro in renewed condition from 2017. For $500, you get an Intel Core i5 processor, 8GB of memory, a 128GB SSD (the 256GB model is also on sale if you need a little more storage), and two Thunderbolt 3 ports. It’s a great deal if you want to save yourself some cash by going without the Touch Bar.

Apple updated the 13-inch MacBook Pro in 2019 to come with the latest-generation Intel processors, with slight speed bumps to both the base clock and Turbo Boost speeds. With the MacBook Pro 16 on the market now, prices of last-gen and smaller-sized MacBook Pro models have been slashed.

You can now save hundreds on the 13-inch MacBook Pro complete with Touch Bar from early 2020 by buying this nicely specced unit at a discount that brings its price down to $950. That gives you a quad-core Intel i5 processor, 8GB of RAM, and a 256B SSD. The new 2020 MacBook Pro with M1 chips were recently released and we’ll be posting any worthy discounts for those as they appear, but if you want a deal, then buying this still-excellent Intel Core model is the surest way to save right now.

The 13-inch MacBook Pro was given a couple refreshes for 2020. Although innovative, Apple isn’t exactly a company known for re-inventing the wheel — it typically sticks to a good design once it’s found it — and the first 2020 13-inch MacBook Pro update wasn’t an exception to this rule, featuring a very similar overall aesthetic to previous models (outdated bezels and all) with some modest hardware updates under the hood. One major noteworthy upgrade is the new Magic Keyboard, which is fantastic. It’s comfortable, it’s quiet, and it even has a proper escape key this time around. The second update, however, added Apple’s fantastic new M1 CPU to the lineup.

This model packs that eight-core M1 CPU along with 8GB of RAM and a snappy 256GB SSD, pairing what are pretty much ideal specs for an everyday laptop with the sort of quality you’d typically associate with the Pro line. You can grab the new 2020 13-inch MacBook Pro for $1,150, which is one of the better prices we’ve seen for this new model.