The Best Motherboards for Gaming in 2021 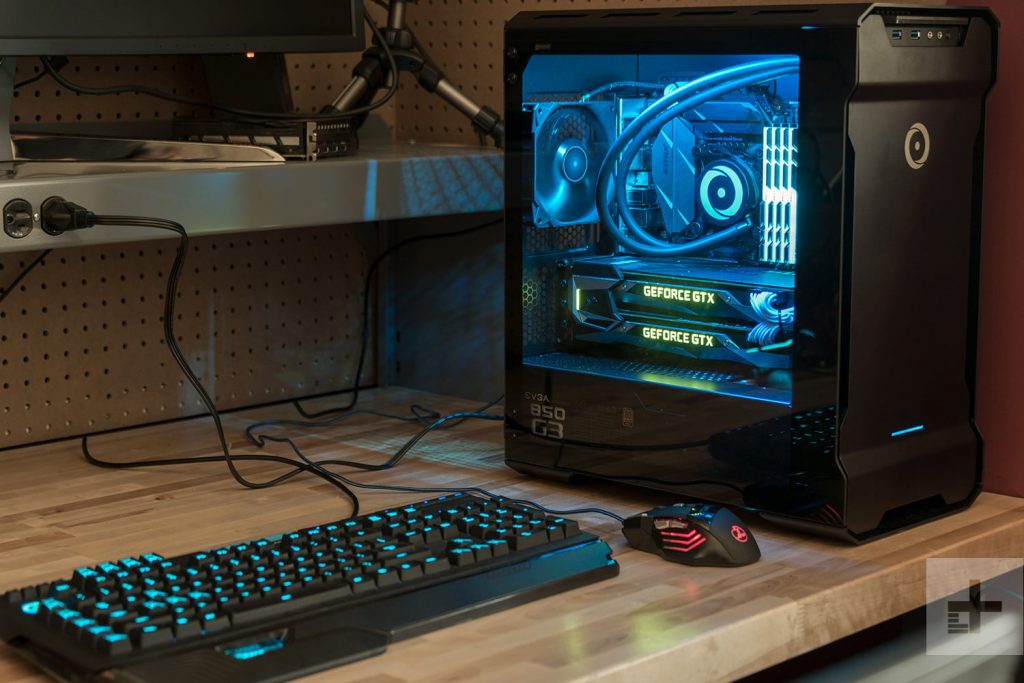 When building a powerful computer, it’s important to pair a powerful CPU with a powerful graphics card. When it comes to motherboards, they won’t do much for your frame rates, but if you want features, a higher-end motherboard can deliver what a lower-end model can’t. ATX or Micro ATX, AMD or Intel — there are plenty of great motherboard options.

A good gaming motherboard may not boost your frame rates in games, but it will ensure that your parts stay functional for many gaming sessions to come. No matter if you’re looking for an X570 motherboard or a Z590 motherboard, we have an option for you.

Instead of comparing AMD versus Intel, we selected motherboards for both CPU makers at various price points.

Best motherboard for gaming under $100

You can still get most of the features of the flagship chipsets from AMD and Intel with their budget chipsets, though there are a few notable exclusions. This price bracket is best for gamers on a budget who don’t need a lot of expandability and don’t care about overclocking too much.

One of the biggest money savers is simply buying a smaller board, however. Both our Intel and AMD pick come in the Micro ATX size, which is usually a good rule to follow. There are plenty of expensive Micro ATX boards, but there are plenty of cheap ones, too. You’ll usually find a Micro ATX version of a full ATX board for anywhere from $20 to $40 cheaper.

The best AMD motherboard for gaming under $100: Gigabyte B550M DS3H

The Gigabyte B550M DS3H is the more straightforward of the two. The B550 chipset has nearly all the features of the higher-end X570 chipset, including support for overclocking. Despite stepping down, the Gigabyte board we selected still supports PCIe 4.0, though it can only handle PCIe 4.0 on a single slot. Similarly, it can only use PCIe 4.0 on a single M.2 slot (X570 boards can support two slots). The remaining connections use PCIe 3.0, which shouldn’t make a difference for many years, especially at this price.

Despite the small form factor, this Gigabyte motherboard is still packed with connectivity options, including a full four RAM slots that can take up to 128GB at 4,600MHz (with XMP enabled). The 5 + 3 phase VRM design is a step down from the boards around $200, though should still provide clean, stable power for moderate overclocks.

The best Intel motherboard for gaming under $100: ASRock B560M-HDV

For Intel, we selected an ASRock B560M-HDV, which is an excellent board given the chipset. Intel, unlike AMD, restricts overclocking to its high-end chipset (Z590 for the current generation). That includes CPU overclocking. Unlike the previous generation chip, this B560 board supports RAM overclocking up to 5,000MHz with XMP enabled.

Overclocking is a big feature to give up, but that’s been the case with Intel’s budget-focused chipsets for a while. Even without overclocking, the ASRock B560M-HDV comes packed with other features, including support for PCIe 4.0 on one of the slots, and Gigabit Ethernet. It only has a six-phase VRM design, but that doesn’t matter too much without overclocking support.

Best motherboard for gaming under $200

Unless you have a very specific need, there isn’t much of a reason to spend more than $200 on a gaming motherboard. At this price, you’re able to buy the best and latest chipset from AMD or Intel, and you have access to premium features like front panel USB-C, better VRM power design, overclocking support, and high-speed memory support.

The best Intel motherboard for gaming under $200: MSI Z590-A Pro

The MSI Z590-A Pro features the LGA 1200 socket for 10th-gen and 11th-gen Intel processors, along with a swath of USB and storage connectivity. It comes with an 8+4-pin CPU connector, which helps deliver power smoothly through a 15-phase VRM. Unlike the Intel board above, this one supports overclocking for K-series Intel processors.

It also comes with PCIe 4.0 slots, unlike last gen’s chipset. That gives you the full bandwidth of PCIe on consumer motherboards so you can use high-end storage devices and graphics cards. The only downside to this board is that it doesn’t include any wireless networking. You’ll need to pick up Wi-Fi and Bluetooth adapters if you want that functionality.

AMD’s latest X570 chipset supports PCIe 4.0, and the Asus TUF Gaming board we selected includes an extra slot compared to the MSI one (two PCIe x16, three PCIe x1). It, too, comes with a range of USB options, and comes with eight SATA 3 slots — two more than most other ATX boards.

Coming from Asus’ TUF line, the TUF Gaming x570 is built for durability and reliability, and reviews show that the board is, indeed, both durable and reliable. The board supports Ryzen 2000-, 3000-, and 5000-series processors, though you may need to update your BIOS for the older processors (you can request a bootkit from AMD).

Most powerful motherboards for gaming

Expensive, overblown, and unnecessary — but undeniably cool — the top-tier gaming motherboards are all that and more, and we love them for it. RGB lighting, masses of ports, upgraded cooling, high-end overclocking capabilities, and all sorts of extras make these boards the envy of every gamer the world over. Few can and should pay this much for a motherboard, but if you want the most extreme performance out of your gaming system, these boards can deliver.

Both of these boards represent the pinnacle of gaming motherboards for their respective platforms, and it shows in their extensive specifications and feature sets. The Asus ROG Maximus board for Intel CPUs can support exceedingly fast memory, multiple graphics cards, and huge storage arrays, and it has tons of USB ports for connecting all of your various devices. It also features stylized shielding across the board itself, making for an attractive and functional high-end motherboard.

The Maximus series has always been known for exceptional VRM quality, and the Maximum XIII Hero is no different with its 14 + 2 phase design. It also supports multiple network connections right out of the box, including high-speed Wi-Fi and Bluetooth, and its RGB lighting is fantastic, giving you full control over how the interior of your PC looks.

Coming in at an exceedingly higher price, the Gigabyte X570 Aorus Extreme board has plenty to offer AMD users who are all in with AMD’s new-gen CPUs. It, too, is a very capable gaming board with plenty of storage options and more USB ports than almost anyone could need. It supports the same high-speed memory and has an excellent audio chip.

It also features native support for Wi-Fi 6 and 10 Gigabit Ethernet for lightning-speed networking capabilities. This is also an X570 motherboard that remains cool no matter what, so much so that its chipset doesn’t even require a fan. Its VRM has loads of conductive metal on the surface, too, keeping the 16-phase setup cool for advanced overclocking and incredible system stability.

These boards also feature total support for many different graphics cards for both Nvidia RTX and AMD RX GPU users. Their PCIe slots are “armored,” signifying that they are strengthened to counteract drooping with high-end and heavy graphics cards.

The truth is these boards are more than most people will ever really need, but if you’re looking for a top-notch motherboard that will pair well with your other high-quality components, we can assure you you’ll be satisfied with these ones.

What exactly are the benefits of a nicer motherboard?

The biggest benefit is VRM design, though. The VRM regulates power to your processor, and more expensive motherboards usually have more VRM phases. That’s an indicator that the board can handle increased power to the CPU, making nicer motherboards ideal for overclocking. As is the case with all PC components, though, individual reviews are a must.

Will any motherboard fit in any case?

No. You will need to make sure that your motherboard can fit inside the case you want. There are three main motherboard standards: ATX (full size), Micro ATX (mATX), and Mini ITX (often just ITX). Before buying a motherboard, make sure your case supports the size. Most cases that support ATX motherboards support Micro ATX and Mini ITX boards, too.

Although uncommon, you may find an Extended ATX motherboard (eATX). These boards are wider than standard ATX ones, and they won’t fit in a good chunk of ATX cases. Make sure to double-check compatibility before picking up any parts.

Which motherboard is best for an Intel i9 processor?

The best motherboard for an Intel i9 processor depends on the processor’s generation (noted by the first number after the i9 tag). The most recent processor is the 11th-gen Core i9-11900K, which uses the LGA1200 socket. The absolute best LGA1200 motherboard right now is the Asus ROG Maximus XIII Hero, but it’s almost $500.

If you want a more reasonable option, check out the MSI Z590-A Pro. It comes with a solid list of features and the latest flagship chipset from Intel. It supports overclocking, too, though you may not be able to push as much power through the board as you can on the Maximus XIII Hero.

Which motherboard is best for gaming?

There isn’t a best motherboard for gaming. It depends on the processor you’re using. For Intel, make sure to pick up a board with the Z590 or newer chipset. The cheaper B-series chipset doesn’t support overclocking, which is important if you want to game. AMD supports overclocking on its B550 and X570 chipsets, so either works.

Outside of the chipset, double-check that your processor fits in the socket on the motherboard. Intel’s latest socket is LGA1200 and AMD’s is AM4. For most people using the latest processors from AMD and Intel, we recommend the MSI Z590-A Pro for Intel and Asus TUF Gaming X570-Plus (Wi-Fi) for AMD.