Indie space exploration games have had a bit of a moment in recent years, with everything from No Man’s Sky to Outer Wilds letting players tackle that final frontier. That said, most of these games are still rather fanciful, not really showing how challenging and intimidating venturing to new worlds would really be. Enter Jett: The Far Shore, a more down-to-earth (er, so to speak) take on planetary exploration that’s more about the basics like shelter and survival than uncovering the secrets of the cosmos.

Developed by Canadian studios Superbrothers and Pine Scented Software, Jett: The Far Shore is certainly stylish, but is it the next great sci-fi indie everyone will be chattering about? Or is this a shore you’d best stay away from? Don’t look to the skies for the answers, just scroll on… 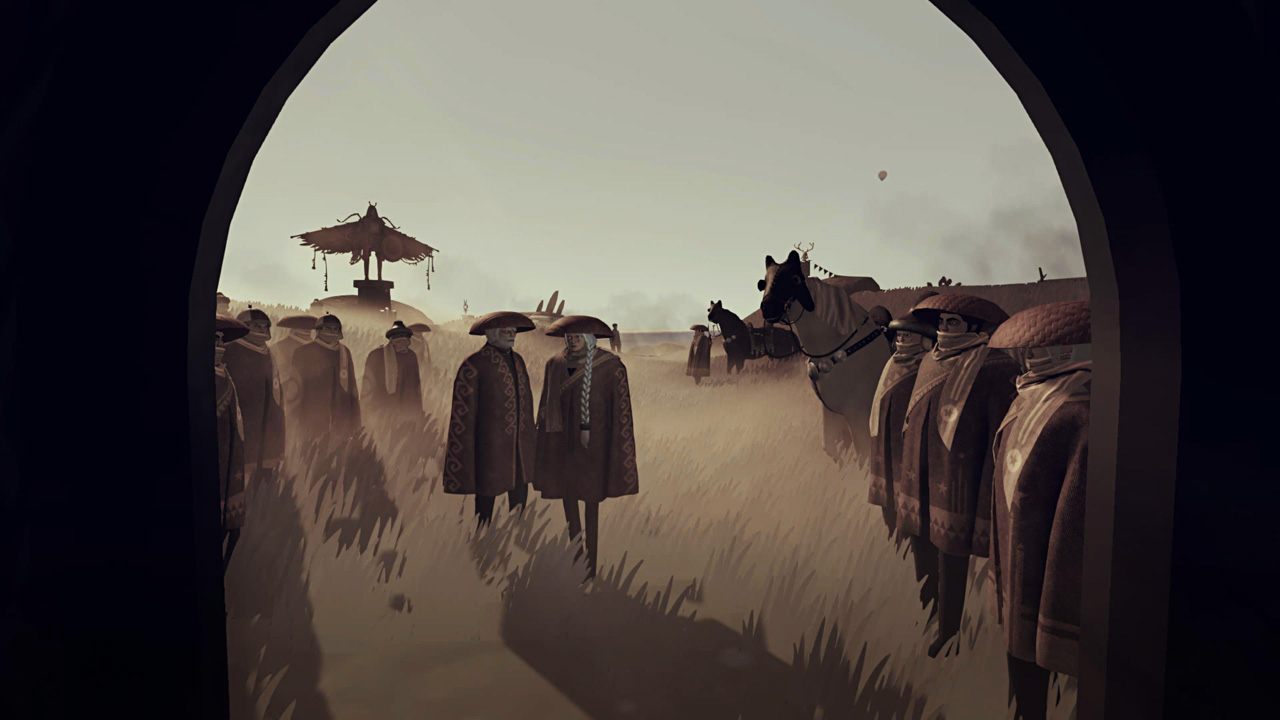 Jett: The Far Shore presents an interesting new take on a fairly well-worn sci-fi setup. Having destroyed their own home, a race of people takes to the stars in hopes of colonizing a new planet, but they’re not guided by science. At least, not the typical kind. The people of Jett: The Far Shore — seemingly somewhat inspired by Inuit and other Indigenous peoples, with bits of other cultures are mixed in as well — are guided by the teachings of a prophet who received a message, called the Hymnwave, telling of a new inhabitable planet across the stars. After over 1000 years in torpor, the “Mother Structure” carrying this civilization arrives at said planet, with players taking control of a member of the scouting team (named Mei) tasked with making sure the new digs are actually inhabitable.

While the new world initially seems promising (a few rowdy alien creatures aside) it soon becomes clear something more is going on there. A giant imposing pyramid dominates the skyline and emits damaging beams of energy, and once our scout party gets inside, they encounter an intelligent entity known as the Wyld, which inhabits members of the scout crew and imparts strange, sometimes unsettling, visions. As minds begin to unravel, the planet’s various storms and other dangerous phenomena increase in intensity and its alien creatures become more aggressive. It feels like the planet itself is conspiring against you. 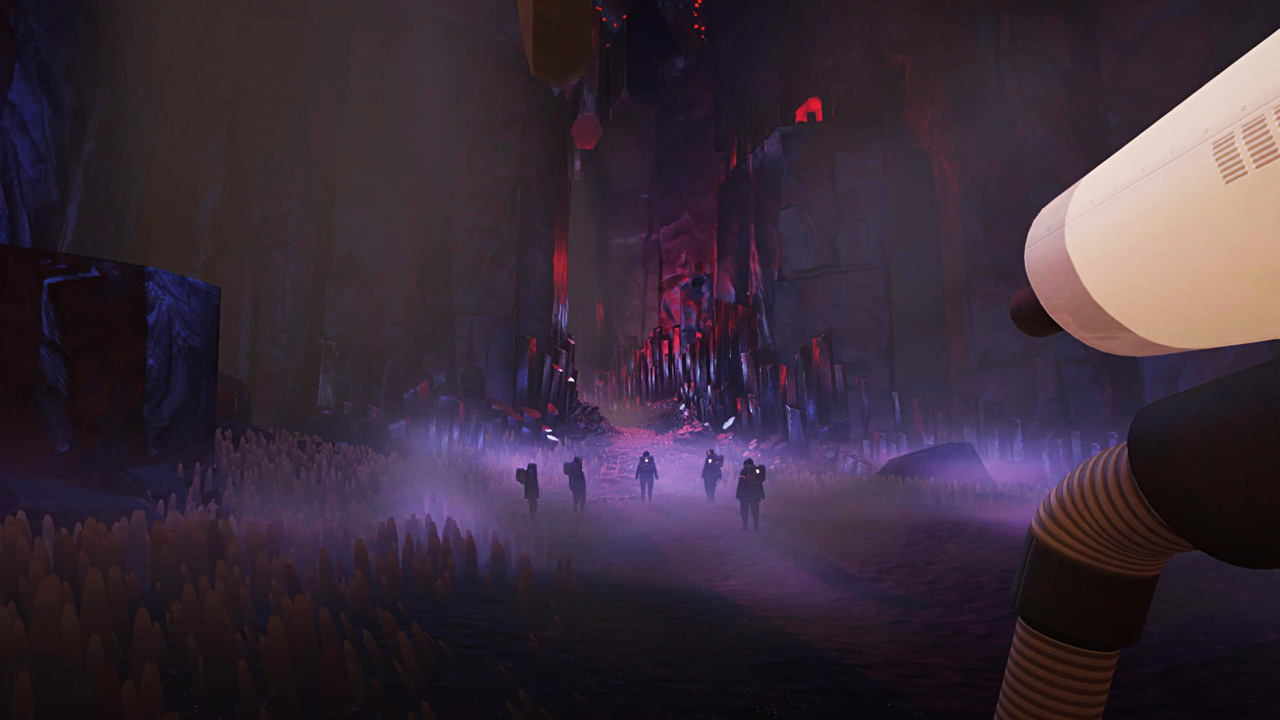 This may sound like the setup to the horror movie, but while there are certainly ominous moments in Jett: The Far Shore, don’t expect any chest-bursting aliens. Again, this is more grounded sci-fi, with the game mainly focusing on the day-to-day concerns of the scout crew – setting up ground control, seeking shelter, establishing communications – with the mind-bendy alien stuff merely providing a backdrop. Even though it doesn’t hit you over the head with too many overt horror moments, there’s no escaping Jett’s heavy atmosphere. The game’s world feels truly alien and an aura of impending doom hangs over everything. Despite that, most of the game’s characters remain relatively upbeat, doggedly sticking to their tasks. Jett walks a delicate line between optimism and hopelessness while contemplating big subjects like religion, environmentalism, and colonization in subtle, open-ended ways. This is real, thought-provoking sci-fi, the likes of which you rarely see in the realm of video games. 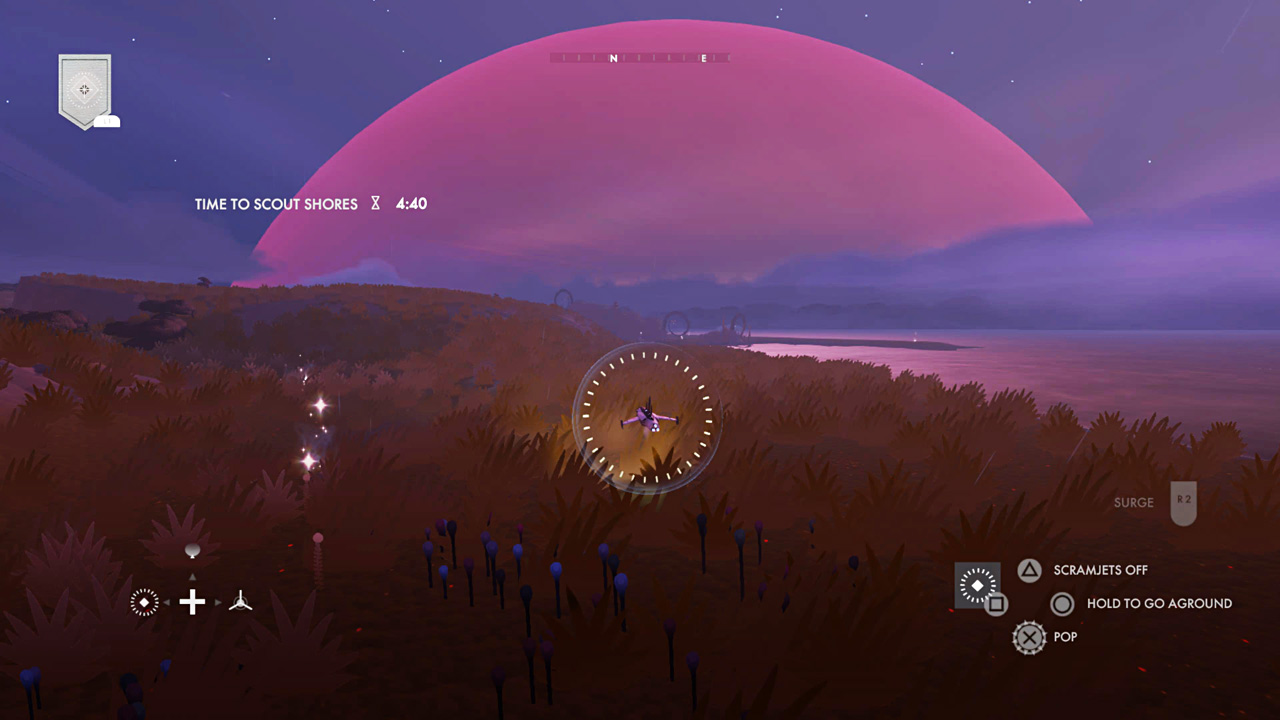 Jett’s fascinating world and storytelling is bolstered by beautifully stylized visuals. The game’s planet is appropriately otherworldly, serving up vast frothing seas, strangely-colored fields and forests, and imposing landmarks seemingly shaped by some alien hand. These strange sights are further enhanced with some great lighting and weather effects. Admittedly, the game does suffer from some slowdown and occasional stuttering on the PS5, but it doesn’t detract too much overall.

Jett: The Far Shore is a genuine work of art or at least its world and narrative are, but it’s still a video game, so… how does it play? Well, that’s where this voyage gets a little rocky. Your titular Jett moves in a unique way, not flying so much as skimming across the surface of the planet, although you can perform small hops and glide. You can scan the planet’s flora and fauna and pick up objects with a grappling hook, but aside from being able to vent some of the fuel that powers your jets to get belligerent aliens off your tail, you have no offensive capabilities. At certain designated spots, you can land and get out of your ship, at which point the game shifts to a first-person perspective. Control during these FPS bits is sluggish, but it isn’t a huge deal, as you’ll mostly just be talking to other characters and performing other basic tasks. 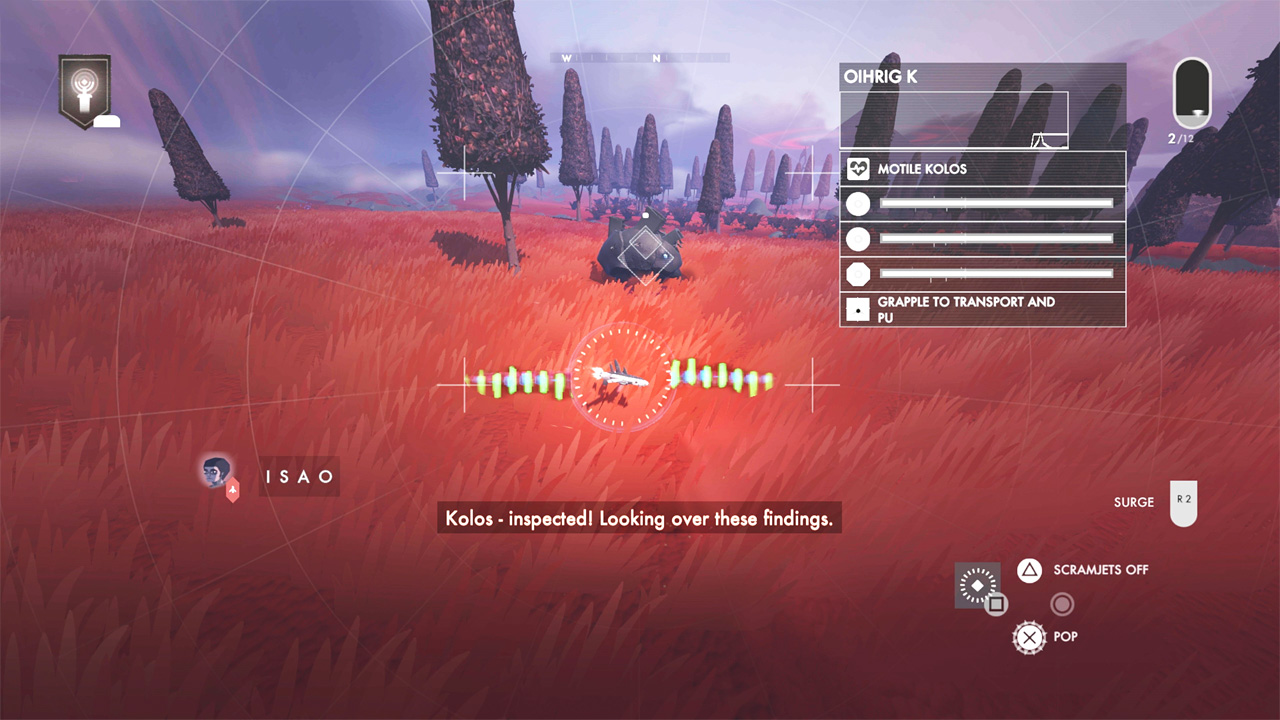 When simply gliding over the ocean or casually exploring open fields, controlling your Jett feels satisfying, but frustration sets in when you have to do anything more demanding. Your Jett is outfitted with scramjets for cruising, but if you want to do anything more delicate, you have to shut them off, rendering your ship slow and awkward. As an irritating extra touch, a number of things – collisions, attacks from certain enemies, etc. – automatically shut off your scramjets. Navigation is also a pain – your map is almost useless and while you can bring up a view that marks important landmarks in your vicinity, there are often so many of them the feature is more confusing than helpful. Many of the game’s objectives also involve following various “resonances,” which basically means flying around in circles for a bit until the appropriate color appears around your ship then flying blindly toward wherever the game wants you to go. It works, I suppose, but it feels simplistic and unfulfilling. 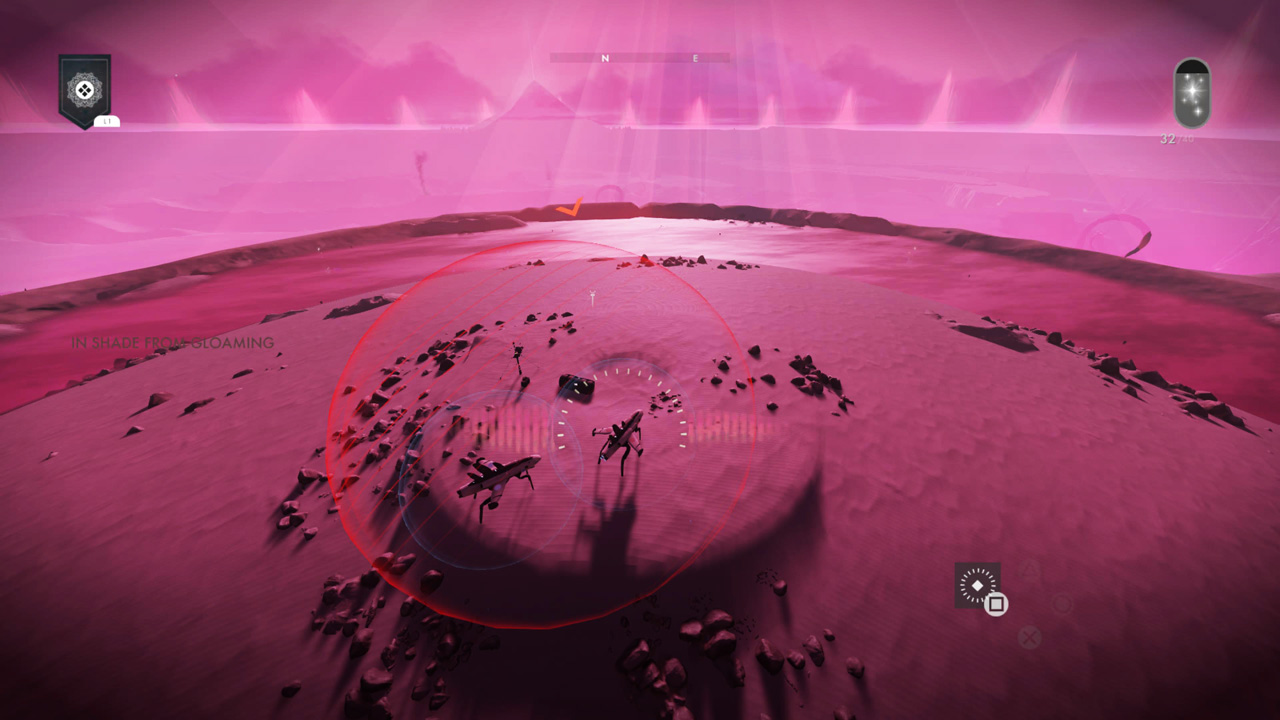 As iffy as some of Jett’s mechanics are, it still works when it leaves the player to figure things out at their own pace. Unfortunately, the game isn’t always so laid back, often throwing strings of complex, sometimes rather daunting objectives at you. An extra layer of confusion is added by the invented language all the characters speak, which is a nice wordbuilding touch, but not so appreciated in the heat of a tough challenge. Most missions change objectives several times on the fly, and since you can’t understand what your AI teammates are saying, you have to keep an eye on the screen for the translation if you are to know what the hell you’re supposed to be doing. If you’re the type who can’t keep up with movie subtitles, this game is going to drive you nuts. Heck, I watch tons of non-English movies, and even I often missed key instructions when beset with persistent enemies and other threats.

And no, you can’t really intuit what to do without the instructions of your teammates, as many of Jett’s missions depend on you exploiting the inscrutable ways the planet’s plants and creatures interact. Things get particularly convoluted toward the end of the game – for example, in order to defeat one enemy, you have to collect a specific explosive resin, dip it in a chemical pool to activate it, and use it to blow up a rock formation in order to free a small black hole you must then lure the baddie into. This all has to be done under a fairly strict time limit while facing all sorts of other threats. I get that non-violence is an important theme of this game, but man, there were moments when I really wished I could just blast some shit. 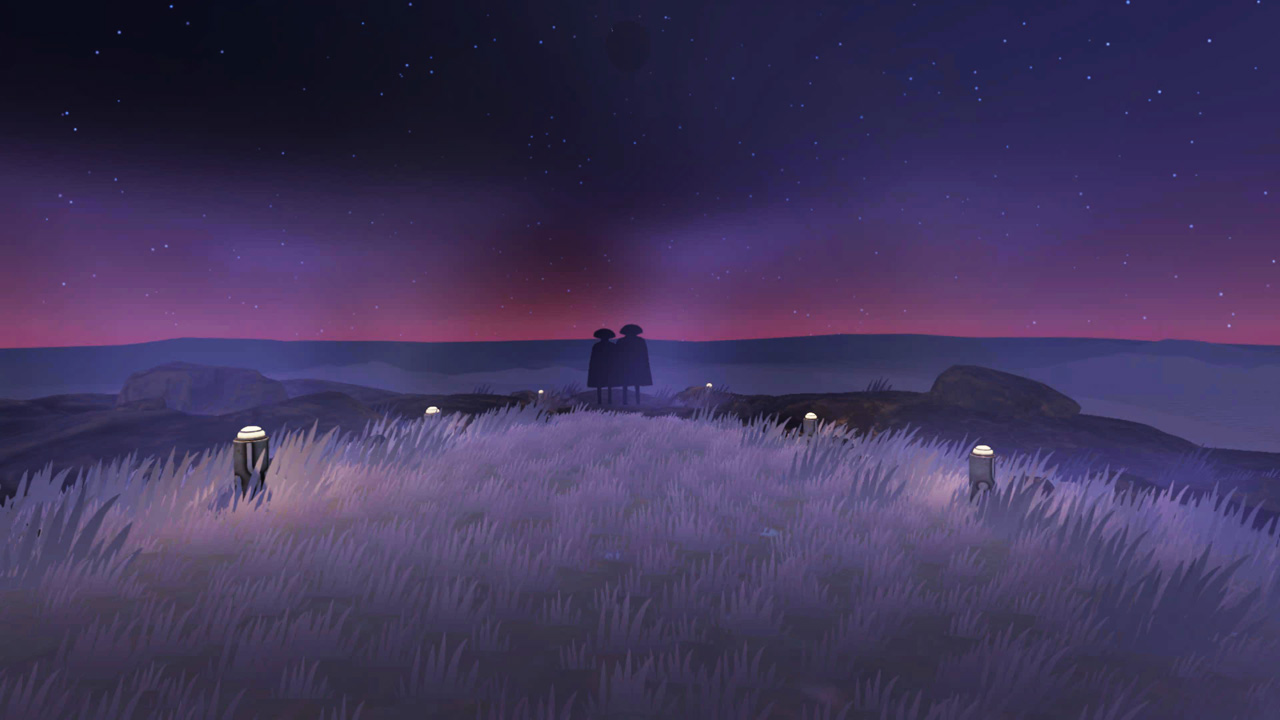 As frustrating as Jett: The Far Shore can be, I still found it engrossing in the moments when I didn’t want to throw my controller, and its 10-hour-or-so story felt like it sailed past quickly. Once you’ve hit the credits you can return to the world to explore freely, and without the pressures of the campaign to worry about, I think I’ll definitely be returning to these shores from time to time.

This review was based on a PS5 copy of Jett: The Far Shore provided by publisher Superbrothers. You can grab the game at a discount here.

The links above are affiliate links. As an Amazon Associate, Wccftech.com may earn from qualifying purchases.

Jett: The Far Shore is a stylish, fascinating, and challenging work of art that may inspire you to say some very naughty words. While it sometimes succeeds as a chill exploratory experience, iffy controls, poor navigational tools, and overly convoluted missions often harsh the game’s vibe. That said, if you’re the type that can appreciate a game for its world and message, despite some issues with its minute-to-minute gameplay, feel free to join the Jett set.