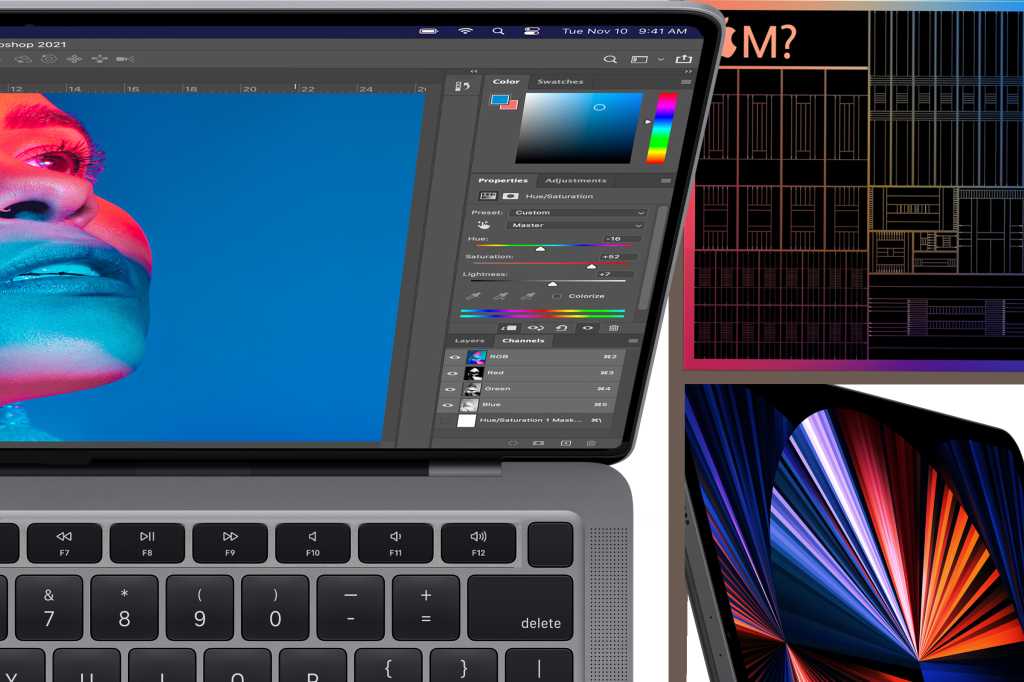 It’s been about a year since Apple began rolling out Macs powered by its own silicon, followed by the launch of the 24-inch iMac earlier this year. Now the rumors say the next in line to get the Apple silicon treatment are the high-end MacBook Pros, and the updates are shaping up to be far greater than mere speed gains. Here’s everything we expect from the MacBook Pros that should arrive later this year.

October 4: Mark Gurman of Bloomberg says the new M1X MacBook Pro “should still be launching in the coming weeks.”

September 29: 9to5Mac has found references to a new “High Power Mode” in the macOS Monterey beta that could boost MacBook Pro performance when using the battery.

September 13: Bloomberg’s Mark Gurman tweeted that there will be a “Mac + iPad” event scheduled sometime after September 14’s “California streaming” Apple event. This could be when the new MacBook Pros are revealed.

September 2: DigiTimes Asia reports that chip shortages may delay the MacBook Pro ship date. DigiTimes said that the shipment could slip into October or November, “instead of the usual September.” As most Apple followers know, September is usually when Apple unveils the new iPhone and Apple Watch (except for last year, due to COVID) and the new operating systems. The company doesn’t usually release Macs in September. Also, November ships dates have previously been reported by outlets including Bloomberg.

July 10: Twitter leaker @dylandkt reports that the MacBook Pro will finally get “an updated improved 1080p webcam for the next model.”

Bloomberg’s Mark Gurman reported that Apple will release a “redesigned” MacBook Pro this summer. It will be available in 14- and 16-inch models; Gurman did not state if the current 13-inch M1 MacBook Pro will undergo any design changes, though iOS developer Dylandkt tweeted in January that the “upcoming MacBook Pro models may not feature a logo on the bottom bezel.”

Jon Prosser of Front Page Tech reports that Apple will release a MacBook Air or reintroduction of the MacBook in color offerings and a white bezel similar to those of the new 24-inch iMac. If Apple is using colors in its consumer-level products, it’s possible that Apple sticks with the space gray and silver options for the higher-end models, which includes the MacBook Pro. And according to a tweet by previously accurate Dylandkt, the MacBook Pro branding might be removed.

In March 2020, analyst Ming Chi-Kuo released a note reporting on Apple’s use of mini LEDs in new products, including the 2021 versions of the 14-inch and 16-inch MacBook Pro. Apple already launched its first mini LED screen in the 12.9-inch iPad Pro, so it’s clear Apple is already working on the tech. While an earlier report from DigiTimes suggested that Apple might delay the launch of mini-LED to 2022, Ming-Chi Kuo reported in July that Apple is preparing for production of the display tech for a launch in late 2021.

Mini-LED is a backlighting technology for displays, but several more LEDs are used than what is currently implemented. This results in better control of the backlight, better image contrast, and greater dynamic range. If Apple’s description of the iPad Pro is any indication, the new display will deliver “true-to-life detail with a 1,000,000:1 contrast ratio … (and) breathtaking 1000 nits of full‑screen brightness and 1600 nits of peak brightness.”

In September, Steve Moser spotted new display resolutions for Apple laptops in the macOS Monterey beta, which are presumably the new 14-inch and 16-inch models. The resolutions listed in the code are “3456 x 2234 Retina” and “3024 x 1964 Retina,” which don’t currently match up with any MacBook models. The current 16-inch MacBook Pro has a screen resolution of 3072 x 1920, while the 13-inch MacBook Pro resolution is 2560 x 1600.

Analyst Ming Chi-Kuo (via MacRumors) said in a research note that MagSafe will be on the new 14- and 16-inch MacBook Pro. Introduced in Mac laptops in 2006, MagSafe was a magnetic power adapter connector that could easily disconnect from the laptop using non-axial force—tugs from angles other than straight away. Its implementation meant that if the laptop was plugged in and for whatever reason, the cable was tripped over or pulled, the connection would break and the laptop would be spared from flying off the work surface. MagSafe was a separate, dedicated plug for power, however, and disappeared when Apple switched to USB-C connectors in 2016. The USB-C connectors support battery charging but do not have a breakaway connector.

Apple has transitioned to Thunderbolt/USB 4 ports in its M1 Macs, and Apple will continue with this in upcoming models. A report in July by Luke Miani at Apple Track claimed Apple will use a high-speed UHS-II card reader like on the 27-inch iMac and iMac Pro.

The MacBook Pro has had an underwhelming 720p FaceTime HD camera for about a decade, but the most head-scratching and frustrating feature on Apple’s high-end laptop might finally be getting a long-overdue update. According to @dylandkt on Twitter, the MacBook Pro “will actually be getting an updated improved 1080p webcam for the next model,” which will presumably be the same hardware in the 24-inch iMac. Apple upgraded the webcam in its all-in-one with a 1080p FaceTime HD camera with an M1 image signal processor and we found it to be a massive upgrade over the 720p model.

Apple introduced the Touch Bar in 2016 to replace the function keys with “a brilliant, Retina-quality Multi-Touch display,” but it has been a divisive feature, to say the least—those who dislike it are quite expressive about it, while people who like it don’t really say much (at least it seems that way). In a January 2021 note, analyst Ming-Chi Kuo said that the OLED Touch Bar will be replaced by function keys. In July, an analyst at Display Supply Chain Consultants seemingly confirmed that report, telling investors that Apple is planning to “cancel the Touch Bar” in the future.

However, a report in July by YouTuber Luke Miani claimed that the Touch ID sensor, which will likely be positioned to the right of the function row, will be backlit with “a specific Touch ID backlight with multiple dedicated LEDs.” He describes the new sensor as circular like it is on the 24-inch iMac’s keyboard with a little glowing ring.

2021 MacBook Pro: Processor and other specs

A Twitter rumor has seemingly leaked small but significant details about the next MacBook Pro. iOS developer Dylandkt—who previously predicted the M1 in the iMac—claims the MacBook’s chip will be branded as the M1X and bring “more thunderbolt channels, more CPU cores, more GPU cores, and greater power draw.”

The speculation for Apple silicon in the higher-end MacBook Pro models is that Apple will use this opportunity to reveal the next in line in the M-series. Bloomberg’s Mark Gurman reported that Apple’s “redesigned” 14- and 16-inch MacBook Pro will have Apple’s system on a chip that features a 10-core CPU (eight performance cores and two efficiency cores), 16 or 32 graphics core options, a maximum of 64GB of memory, and an “improved Neural Engine.” The graphics cores will increase from eight to ten. The chip will reportedly be called the M1X, as evidenced by several rumors and Apple’s own tags on the YouTube video for its WWDC keynote.

Apple has been rumored to be including 5G and Face ID support in its laptops, but Bloomberg’s Mark Gurman reported that those features do not appear “to be coming soon.”

According to a report by Bloomberg’s Mark Gurman in the Power On newsletter, Apple will release the new 14- and 16-inch MacBook Pro with Apple silicon in November. French Apple Site Consomac reported on two new Macs numbered A2442 and A2485 that likely indicate a fall release. On September 13, Gurman tweeted that there will be a “Mac + iPad” event scheduled sometime after September 14’s “California streaming” Apple event. In early October he also reported that the new MacBook “should still be launching in the coming weeks.”

Twitter leaker Dylan also said new MacBooks will arrive in the fourth quarter of 2021 and the Economic Daily News, which has been a reliable source of supply chain information in China, said Apple only began to increase its manufacturing capacity in late June. Finally, Ming-Chi Kuo reported in July that production for the new MacBook Pro would begin in the third quarter, a timetable echoes by Mark Gurman. In August, DigiTimes reports that volume production has begun, signaling that a release is imminent.

Based on prior Apple silicon launches, the 16-inch model will likely still start at $2,399. On Twitter, leaker Dylan reported in August that there will likely be “a notable increase in price for the 14-inch” as compared to the current 13-inch model, which starts at $1,299. It’s likely that the 14-inch MacBook Pro will take the place of the $1,799 13-inch MacBook Pro.