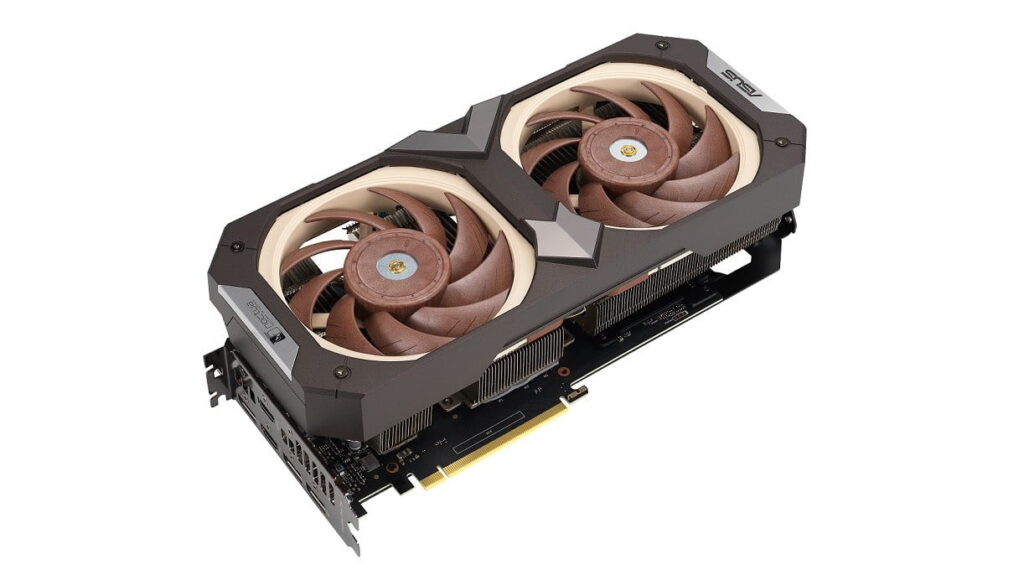 Asus and Noctua have teamed up to produce the Asus GeForce RTX 3070 Noctua Edition graphics card. Fully decked out with Noctua cooling solutions and a co-engineered heat sink, it will be the first GPU of its kind. Bigger than the standard RTX 3070, the graphics card emphasizes proper cooling combined with quiet performance.

According to Kent Chien, corporate vice president and general manager of the Asus Multimedia Business Unit, the heat sink design used in this GPU represents a new solution. Matched with Noctua’s state-of-the-art NF-A12x25 fans, the RTX 3070 Noctua Edition is going to optimize the ratio of heat dissipation per decibel of noise emitted.

“Customers have been asking us to create GPU cooling solutions for quite some time, so we’re excited and honored to team up with Asus in order to make this happen. Using our NF-A12x25 fans and fine-tuning the heat sink for use with them, we’ve managed to achieve a significant boost in performance-to-noise efficiency”, said Roland Mossig, CEO of Noctua.

Noctua and Asus promise significant improvements over other versions of Nvidia’s RTX 3070. At medium fan speeds, the card is said to have up to a 15 dB(A) noise reduction, with a 9 dB(A) reduction at max speeds.

As long as it’s installed in a case with good ventilation and ambient temperatures of no more than 24 degrees Celsius, the card is claimed to maintain low fan speeds even when the GPU load is at 100%. In such conditions, Noctua promises a 5.7 dB(A) noise reduction in comparison to the standard edition of RTX 3070. In addition to the optimized cooling and noise levels, the card comes with a 1845MHz boost clock.

During periods of low stress, the Asus RTX 3070 Noctua Edition utilizes its semipassive fan control setup. This means that the fans will turn off entirely when the temperature of the card goes under 50 degrees Celsius. According to Asus, the card should be able to run low GPU-load tasks without utilizing its Noctua fans at all. The manufacturer claims this includes even light gaming, although that remains to be seen.

This new GPU might make an exciting addition to the graphics card market. Both Asus and Noctua are well-established brands. The former is responsible for many high-quality components, including graphics cards, while Noctua fans are widely regarded as some of the best coolers in the PC-building world.

The official release date and price have not been revealed.